Some while ago I posted a repaint for the T21 Sedbergh in the guise I flew in as an Air Scout back in the Sixties.

I recently found a clip on Youtube (https://www.youtube.com/watch?v=ww6we1zf_N0) that features the real 'plane in a Pathe film about gliding at Lasham.You can see this T21 from about 1:10 onwards.

It just goes to show you can't trust your memory. Looks like I'll have to get the paint box out again.
Last edited by JohnWillimas on 11 May 2019, 13:28, edited 1 time in total.
Top

I don't see any "T21" on either paint. John, but assuming that it is the exact same airframe, and wasn't painted differently at the time of your flight(s) :
Our memory can let us down.

If really necessary, thankfully your alterations look to be relatively simple.

Apologies, Mike, my rotten typing! I meant "this T21" - that is "you can see this aircraft at around 1 minute 10 seconds on in the video". You could be right about it having been repainted - this film was 1960 and I was flying there 6 years later. At that time the Air Scouts also had use of an Avro York as a dormitory. One thing I won't forget is how cold it was and trying to make weak link loops by splicing rope when your fingers looked like half a pound of Walls sausages....

Apologies, John!
Any fool should have known that you referred to the Slingsby T21. Even I have heard of it, but didn't make the connection.

Now you have me puzzled though.
You had the Scouts' emblem on the fin, so did you fly with the Scouts? My enquiries on line showed some of their gliders marked AIR SCOUTS, but still blank fin.
The AIR CADETS labelled gliders seem to be Air Force owned, carrying Roundels, fin stripes, and Air Force numerals.

btw When I was in the Air Training Corps, late 1950s to mid 1960s, "Air Cadets" wasn't heard of, though I know that's the current name.
Nobody ever offered us glider flights.

Even though we were based at Northolt, I only flew once, in a Chipmunk, and that may have been at Hendon. Can't be sure, as it was not entered in my Record Book.

Goodness me, Mike, you were unlucky. I was in the ATC in Portsmouth between 1962 and 1966 and had regular visits to No 2 Air Experience Flight at Hamble for Chipmunk flying and several more Chippie trips during each of the Easter and Summer Camps I attended over those years.

As far as gliding went, I spent 3 September weekends in 1964 at No 623 Gliding School at RAF Tangmere to get my A & B Certificates (and a nice pair of ATC glider pilot's wings to wear on my uniform!) in T21s.

I've always loved this shot of a T21 from 623 GS landing at Tangmere. 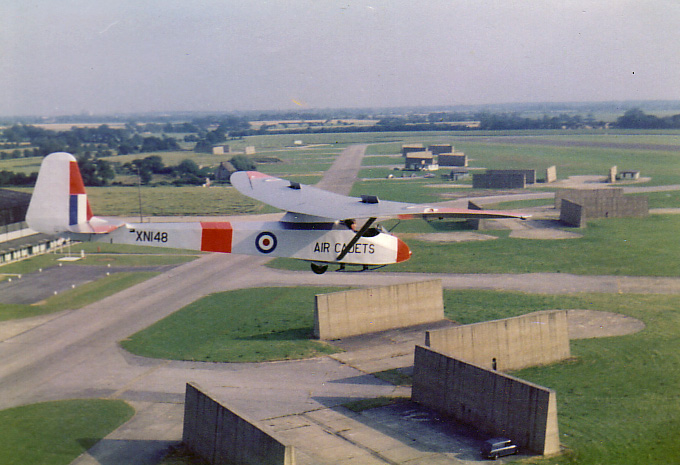 Mike, yes I was flying with the Scouts. Back in the 60's they owned a few gliders but they also had arrangements with various clubs too. Being a South London lad my Scout troop used to do powered flying out of Biggin Hill, the London air scouts had an arrangement with 600 Squadron Flying Club. First thing I ever went up in was their Percival Prentice. I've managed to track down a few black and white pictures of that T21 from that time and none of them have the Scout badge on the fin, so I'm guessing that was my imagination. I did a few weekend camps at Lasham glider flying but never got as far as going solo. The best flight in my log book was about an hour soaring in a Slingsby T49 (similar to the T21, side-by-side two seater but a closed cockpit), we got up to about 4000 feet having come of the launch at around 1000. Sadly after an hour my instructor thought it was time for some of the others to have a go! Those days we either used the winch or a tow truck to pull us up - the winch got more height as I recall. I tried being aerotowed a few years back and it felt VERY disquieting to be that close to another aircraft in the air!
Top

Pete & John,
Good to hear of your experiences!

This was with the ATC at RAF Usworth, now the Nissan car factory.
George

I demand a re-play of my life, of course knowing what I know now.
I've heard that FOMO afflicts youngsters today.
This oldster is suffering from FAHMO; (frustration at having missed out)

I was in the Air Training Corps in the late 80s and early 90s. I flew from Northolt during a summer camp in a 5 Squadron HS125 (XX508)! Lovely but short flight. The only time I've flown in a rear-facing seat. I still have the 5 Sqn drinks mat I 'borrowed' from the table. I must return it some time, I expect some jobsworth quartermaster is probably still looking for it...