Hi folks -
Whilst sheltering from the burning sun I've finished the Consul ready for a beta test. 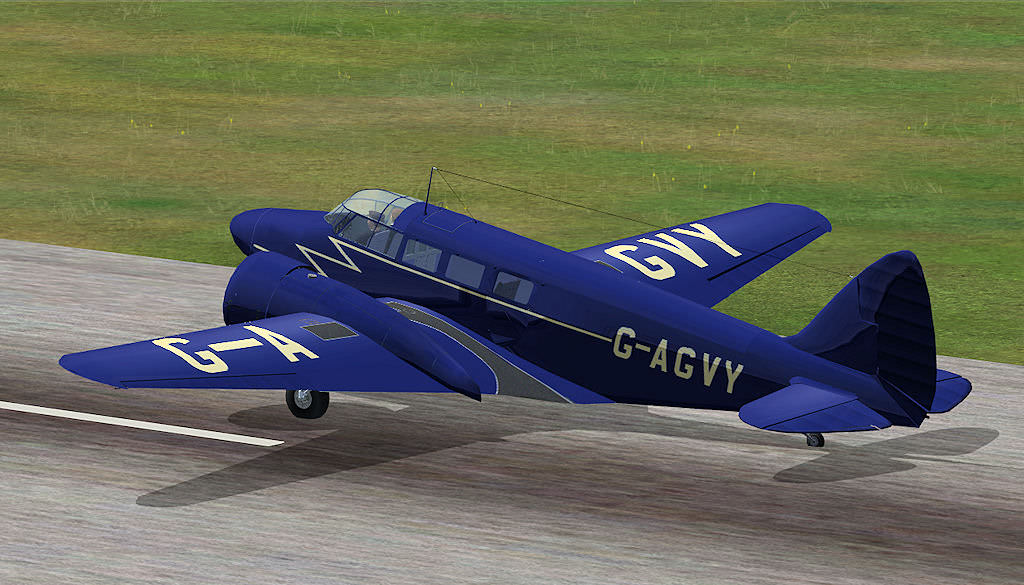 The Consuls were converted Oxfords ready for use as civilian short haul airlliners, so not a lot has been changed
other than a modified interior and a new paint job.
You can get the files here - https://www.dropbox.com/s/uxtyffv5taimw ... a.zip?dl=0
The aircraft is built for FS2004 but performs well in FSX but unfortunately won't show in P3D V4
Cheers
Dave M(oly)
Top

Looking good Dave! Thanks for the files. I wondered whether you would choose 'GVY or 'IKR! Must crack on!

Thanks Dave got it - will report later when sheltering from the heat of our day!
Keith
Top

Dave, found a few things unfortunately:
Brake scalar on Oxbox = 0.6, on Consul = 1.0, hence too easy to nose over.
She floats too much & is difficult to lose speed on approach, found Oxbox has a flap drag scalar of 1.5, on Consul its missing (as well as the pitch & lift scalar, but those two missing is not important).
External view 3/4 looking up & aft - there is a gap between fuselage & fin - same on Oxbox - missed that before! Same with elevator/tailplane - gap noticed.
Would like to see some gloss on the exterior except of course for the walkways. ? reflection mapping or some more alpha?
Interior sidewall mapping around pax windows - there are drag lines due to your texture - suggest re map at 90°?
Like the radio suite - you found some nice sets there, trouble is I don't know how to use radio stuff, seat of pants & visual only am I!
Liked very much the brass fittings & Ash trays....
Will fly her a bit more to see if anything else jumps out at me later on.
Keith
Top

Back from a protracted period without internet.

I still need to finish my repaints for the Oxford, but finding the Envoy here is a nice surprise! :3

Definitely going to give it a spin, and see if it throws up any issues.

If it helps, I already cobbled up a voicepack shout-out for the Consul (and for the Envoy as well).
Top

Just did a small trial flight, and I found two minor issues:

- The Virtual Cockpit viewpoint for the Consul (and Oxbox) seems to be a tad too high. Both are set in such a way that the canopy frame blocks out most of the lower horizontal view, especially when looking to port. I reset the eyepoint from 2.88, -0.60, 3.75 to 2.88, -0.60, 3.35, which is more akin to the viewpoint as seen by the two virtual pilots in the cockpit.

- In the external view, I noticed the two spinners are dancing around a bit - looks like an erk mounted them slightly assymetrical.

As Keith remarked, with a 1.5 flap drag scalar, her landing qualities improve vastly. My first attempt at landing her (without flap drag scalar) had her floating down the runway at Renfrew; my second attempt (with flap drag scalar addded) had her to a stop by the second turn-out...
Top

Done a bit more approaches & landings & have modified the Flap lift & drag & undercart drag quite a bit in the airfile, she will now glideslope at about 1000 fpm @ 75/80 ish KIAS throttle closed.
Stall flaps down also nearer the quoted value about 52/53 KIAS- she was stalling about 47 KIAS, if one could bleed off the speed.
Eyepoint for me reduced from 3.75 to 3.5 vertical.
Have sent modified cfg & air to Dave for his perusal.
Don't forget that the engine/ prop/ mixture relationship is fiddled as in the Oxbox in order to get 2000 rpm @ -2 psi - mixture needs to be brought back to about 18%. Quoted cruise for Consul of 135 KIAS must be -2 psi @2300 full rich at sea level (?)
Keith
Top

Hi
Finally escaped from 'other duties & visiting' and am pleased to see all the comments. I should have time to consider them in more detail tomorrow.
Just a point about the gloss finish Keith - I use specular shine not reflection in the GMax texturing box. The wings & tail are glossy in exactly the same way as the fuselage & fin however - because they are vertical they pick up the reflection of the surrounding landscape whereas the wings & tail being horizontal reflect only the clear(ish) sky. However, if I roll the aircraft, the reflections on all surfaces then become obvious (FS9 & FSX) as the aircraft changes its orientation.
More later folks -
Cheers

Dave, yes I do similar with my gloss & I use alpha also, I do note that your alpha is darker than the one I use (mine 242, yours 231 RGB). Not used reflection yet on published work, but am experimenting on current WIP.
What Ambient/specular/self illumination do you have, my Gull series use 200 RGB & my specular level is 55, Gloss setting 30 & soften of 0.3. Although for my Vega G-AEZJ I used a specular level of 85, gloss of 50 & soften of 0.04 on the fuselage because of the real world gloss on that aircraft.
Maybe that particular shade of dark blue is the problem for my screen settings? Dunno.
Your other Airspeeds do not seem to suffer, but then the wings are lighter colours.
Keith
Top
Post Reply
20 posts