Thanks Gents for all your tests and comments -

So, I've now tweaked and modded where appropriate to the point where I can now publish to the world.
Individual comments -
a) no Peter - my other paint choice was AHEG in its pale grey and white with red cheat lines but ... didn't want to rob you of the pleasure.

b) Keith has done some great work on the aircraft.cfg and .air files - these now will replace my originals - thanks Keith
I've also remapped the fuselage interior - it had got distorted as I cut out the additional windows: also fixed the fuselage - fin gap.

c) I've fixed the spinner wobble Okami and dropped the V.C eye height. This is a tricky one as various photos of this aircraft and the Oxford show pilots
peering through both above and below the window bar - depending on their height I suppose.

Thanks again all - I'll just let it rest for a day of two before releasing it.
Cheers

Specular level = 0, thats the main one I would say needs increasing, as well as a bit more gloss value. My values also empirical, but with my WIP I'm experimenting even more, but mainly in the texture department.
Glad the new FDE works for you.
Keith
Top

Keith - are you thinking the arcraft needs more gloss ? if it did then I would play with the alpha layer values. Setting the gloss in the .mdl 'freezes' it so then no variation can be made by repainters. Anyway, I'm satisfied with the modest level on this model. 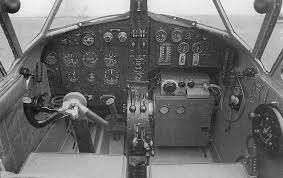 Note the radio stack crammed under the starboard panel - I used this as my starting point. Because the Consul was in use during a time of rapid airborne radio development, I've provided a) a V.H.F. comms set, b) a nav set for the new-fangled VOR.s and ILS systems and c) an ADF set for the NDBs and local radio stations.
Cheers

Dave, Yes I know it 'fixes' it for other textures, but I find it best because it creates the shine highlights & gloss according to the shape of the object, a bit like adding a reflect map on very shiny metal or glass. I don't think the alpha layer does that & one has to be careful that too much alpha can make it see through at night.
Nice find for the cockpit shot.
Keoth
Top

Any possibility of an FSX native version of this beauty?
Joe Cusick,

Sorry - not from me, I only build for FS9/FSX which means no P3DV4.
Cheers

You really should try, I think it could be a life changing experience

Nervous breakdown more likely, I had enough problem loading FSX version of Gmax, & getting all the animations so far has defeated me!
Keith
Top

Agreed Keith -
Not sure I need such hassle at my time of life. It's probably a job best left to the long winter evenings.
Cheers

I've just uploaded the Consul to Flightsim.com where it will be appear in a couple of days after their scrutineering.
Thanks to you all for your beta testing.