A little Christmas pressie for you to try if you get bored watching the box. Here's the beta fileset for my latest build of the Gloster Gladiators MK1 & 2 for FS2004 & FSX.
The zip set can be downloaded from here - https://www.dropbox.com/s/fl50wpwiule9y ... a.zip?dl=0 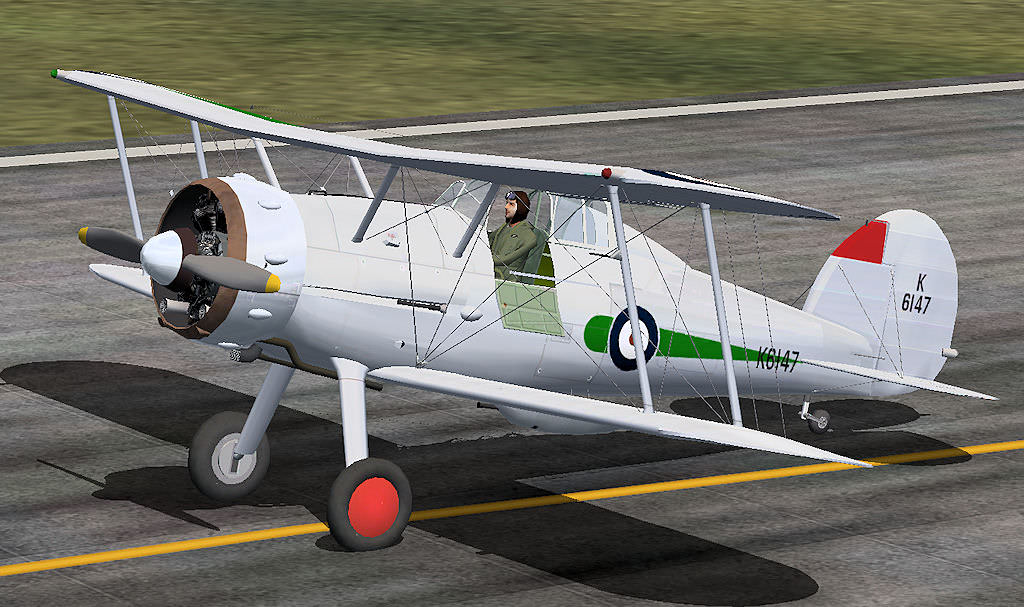 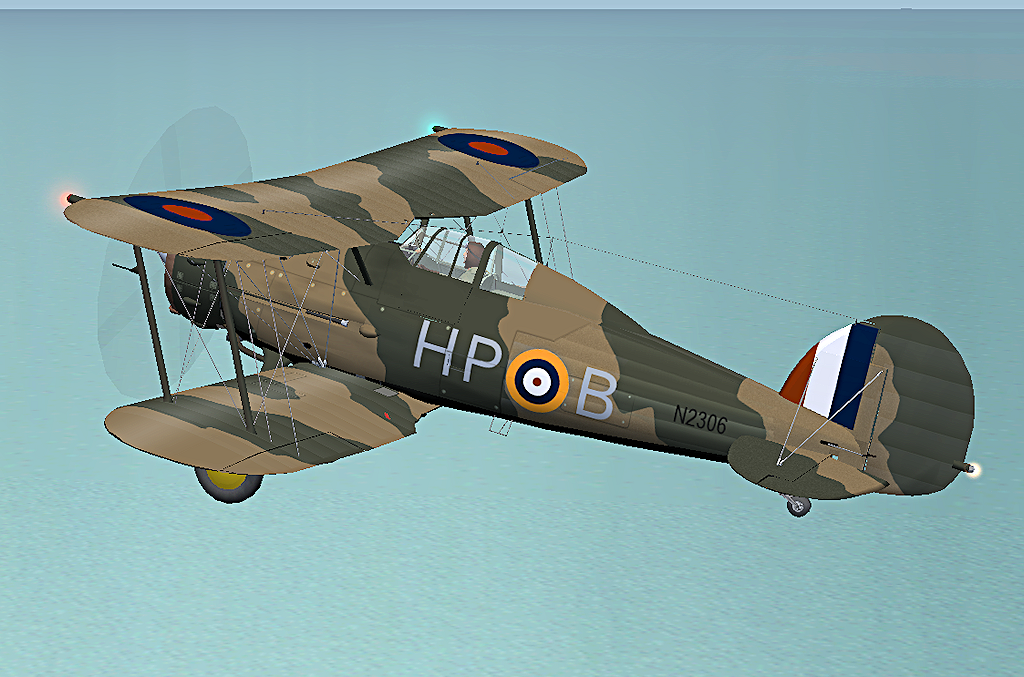 The only real differences between the M1 & 2 are a new 3-blade metal prop and a standard RAF blind flying panel. The difference in flight performance is marginal so I feel justified in combining both in one aircraft cfg.

Please test at your leisure (no hurry) and report back here stating which Sim you used (sorry - P3Dv4 won't work).
Cheers & ATB for the Christmas hols.

Hi Dave,
Nice one, especially like the metal bits alu gloss of the Mk I.
Couple of initial points:
Stbd tailplane underside just inbd of the horn balance - there is a polygon that is not textured the same as the rest - more noticeable on the Camo Mk II.
Notice also on underside of fuselage at about 50% chord there is an athwart-ships panel that is not textured.
Engine start smoke is a default variety as none called up in the .cfg.
Not getting above 710 HP or above 2600 rpm except in a dive & only about 190 KIAS level flight. Not sure of problem at the moment.
Computer Joystick trim switch click is a bit coarse so difficult to trim level flight.
Spins not possible - sort of to the right, but only spiral to the left. I will try to fix?
The above applies to both FS9 & FSX SP2.
FSX SP2 glass is OK for cockpit glazing, but reflector gunsight glass is quite dark.
Other than the above, she flies very nicely & has good aeros capability. Nice new handsome pilot too!
Keith
Top

Thanks for your comments so far Keith
1) The starboard tailplane underside problem turned out not to be a texture problem but a more serious mesh anomaly.

Solved by mirroring & retexturing the port one. The small rectangle under the fuselage represents a panel on the real aircraft.
However, I've now painted it black/white which I had forgotten.
2) Strange how different sim installs produce different results sometimes - I can get 2600 rpm and 200 knts in level flight but after much effort.
3) Yes trimming is sensitive - correct I suppose for a fighter aircraft where straight & level 'hands-off' flight is the quick way to a swift exit !
4 )Cockpit glazing took some time to get right - I settled for a very transparent look to avoid 'washing out' the wing textures.It proved not possible to correct the gunsight glass in FSX (yet).
** solved it - needs a separate FSX sightglass texture.

Family coming around soon so must fly.
ATB for the coming festivities -
Cheers

Dave,
Have you been able to find out how much boost is available on the Bristol Mercuries?
I can get the HP & RPM & max speed now, but need +8.7 psi boost ( or 48" Hg) - gauge needs increasing beyond +4 psi if so. Cruise is OK at 160 KIAS & zero boost at 2000 RPM.
Now onto the spinning investigation.
Keith
Top

All nice & peaceful here today now the family has gone late last night Keith.
Boost ? yes - the general article on this Mercury engine series in Wickipedia quotes a maximum figure of +9p.s.i. - close to your figure. (OTOH another article states the engines were designed to run continuos boost of +4 p.s.i. minimum) If 9 is what you're settling on, I can easily re-draw the gauge face & re-do the xml file. An article 'flying the Shuttleworth Gladiator' mentions that it is limited to +4.5 lb for 5 mins but that's for preservation, not dog-fighting.

.I do have a boost gauge calibrated from -4 to +14 p.s.i. which should suffice.
Don't get too involved with making the aircraft spin at the expense of the general performance - I've never received any comments about spinning for any Simmers.
Cheers

Thanks Dave, I have not found the Shuttleworth document, but yes found the Wiki info for boost.
I copied, pasted & modified the engine & prop details from another aircraft, mainly to see what differences there was between that & your original & found it quite a lot different, but more like my models, & tweaking gave me the speeds & power values expected.
As for spinning I have found the culprit, it just needs cleaning up.
As for users trying spinning there does not appear to be many that comment or not, but you never know, so being a stubborn Taurean...........
I will try tomorrow to clean it up & then send you the amended air & .cfg files for you to try.
Keith
Top

Hi Keith - thanks , here's the link https://haa-uk.aero/document-category/pilots-notes -some useful stuff there.

Look forward to your config files.
ATB for Chrismas -
Cheers

Dave, Thank you for that link, I will have to read the rest of them too.
Keith
Top

I took the liberty of running the Mk1 though MCX to see how easy a P3d conversion would be.

No nasty surprises, the conversion was really straight forward.

Only done the Mk1 exterior, as the model is still beta I'm sure things will change and I'd have to start over with the finished model anyway.
Obviously, I wouldn't upload any mods without your approval.

Very interesting Dave.
I have ModelConverterX but have yet to get my head around using it to, er, convert.

You may of course publish your converted aircraft, permission being granted.
Yes, wait until the release as there are a few things to change yet.
Re. the odd 'missing' textures, these are from parts that I have merged into the model from earlier aircraft. They bring their texture names with them but thay have all been renamed & retextured - seems a ghost still stays with the part - odd !
Cheers