Yes, I've managed to make her disappear with the weight menu - it's very odd though. I'm looking forward to the update.

Looks like the Islander's big update is almost here:

Saw this last night, it does look superb. And given that I already have it, a fantastic free update for existing owners.

....The Black Box Islander is a source of great pleasure to me at the moment, especially out of Lee-on-Solent

Gina
It's so nice to be insane, nobody asks you to explain.
Top

Yes, it's a good model, even though it doesn't come out of the hanger much (me being a tubeliner type

) This upgrade can only make it better

AvAngel's got a preview copy of the new Islander: 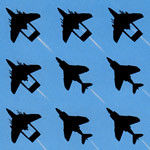 I'm really pleased to see BBS releasing a major update! I really hope they continue to release other, smaller updates as time goes on (as most other developers tend to do these days). I also hope they respond to feedback and release updates for their other products, which have some shortfalls (see their forums threads).

), although I recognize the differences are substantial and not just skin-deep (which, conversely, if why I'm so keen to see them done)... Does anyone out there fancy collaborating on some freeware models of such, starting with the AL1?