Sorry Paul, you’re absolutely right. I think it was in the February Q&A they mentioned they would look at whether it could be implemented properly.
Ben.

There are some mods at Flightsim.To which make TACANS useable in the sim, like this one for the Netherlands:

So, it can be done - I wonder how easy it is. It would make a nice broad project for a community group, to activate all of them world-wide. In the meantime, I shall have to stick with VORs and NDBs; so far that's been fine, but a couple of the Australian legs of this route might be a little tricky.
https://rationalwiki.org

There is info in the SDK about TACANs, but I've not looked in detail yet.
Dave G.
Top

Cheers, Dave, glad you like them. Thanks also for pointing out that the DME will pick up a TACAN if the frequency is set - very useful to know. With NAV 1 or 2 using the same frequency, I also hear the Morse identifier. Good stuff, thanks again.

Not a lot of sightseeing on this leg, as I had to stay pretty high to avoid the mountains over southern Turkey. 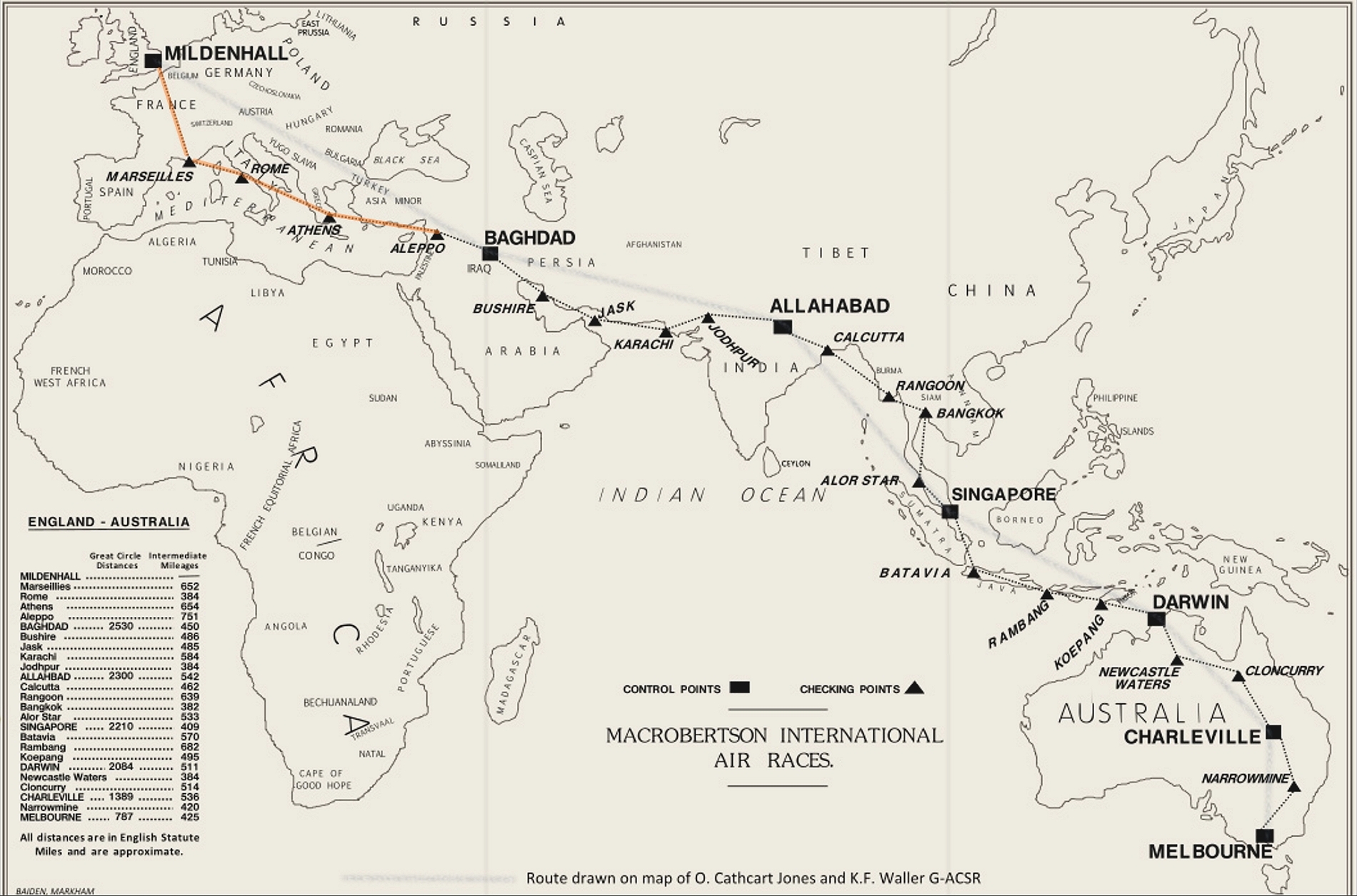 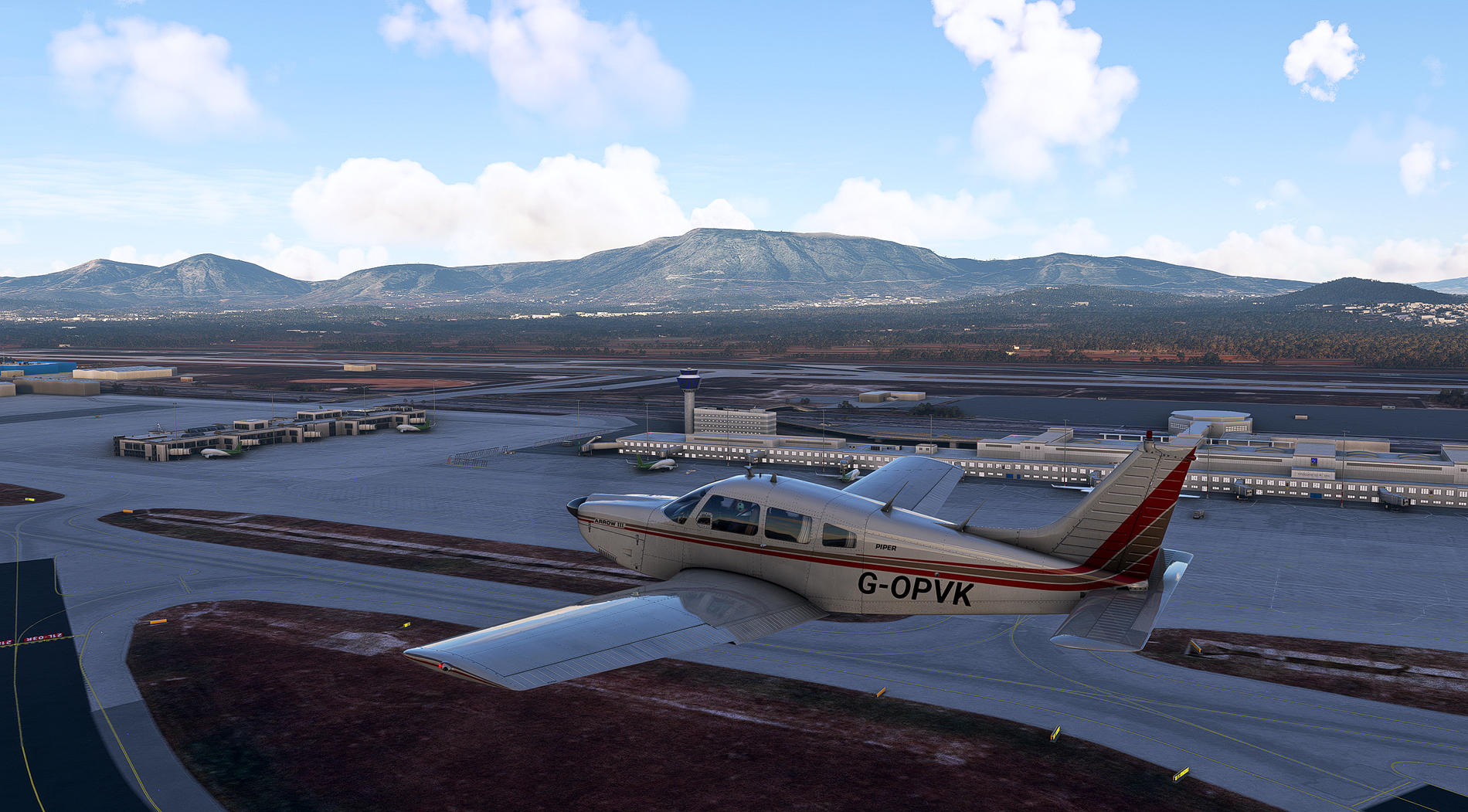 Out over the sunlit Aegean Sea. There are islands everywhere - no wonder the Greeks became such accomplished seafarers. That's the island of Tinos: 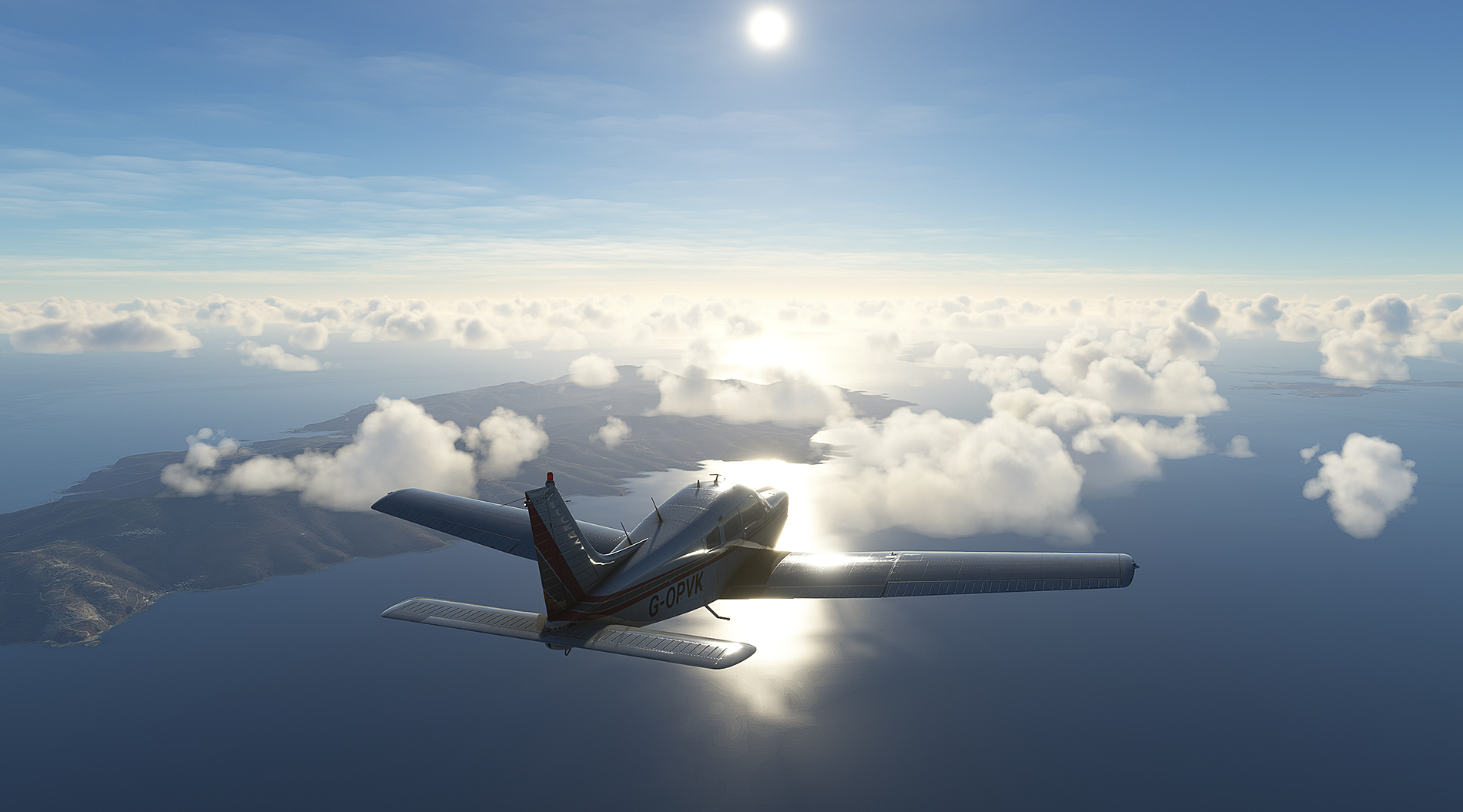 Mykonos and a slight course change behind me, and on to Kos: 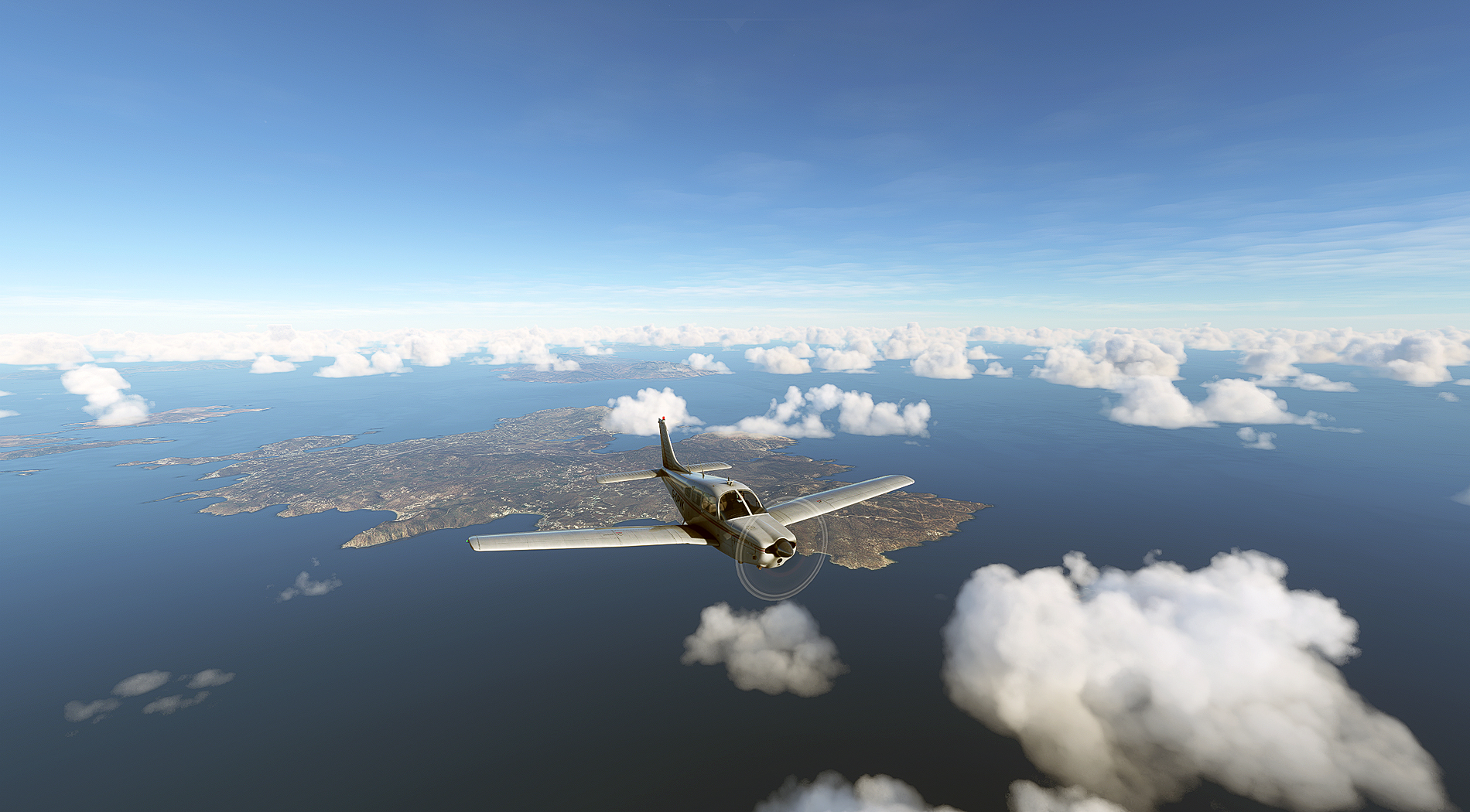 Past Kos, and crossing the Turkish coast not far from Marmaris. This is the Dodecanese region, where The Guns of Navarone was set: 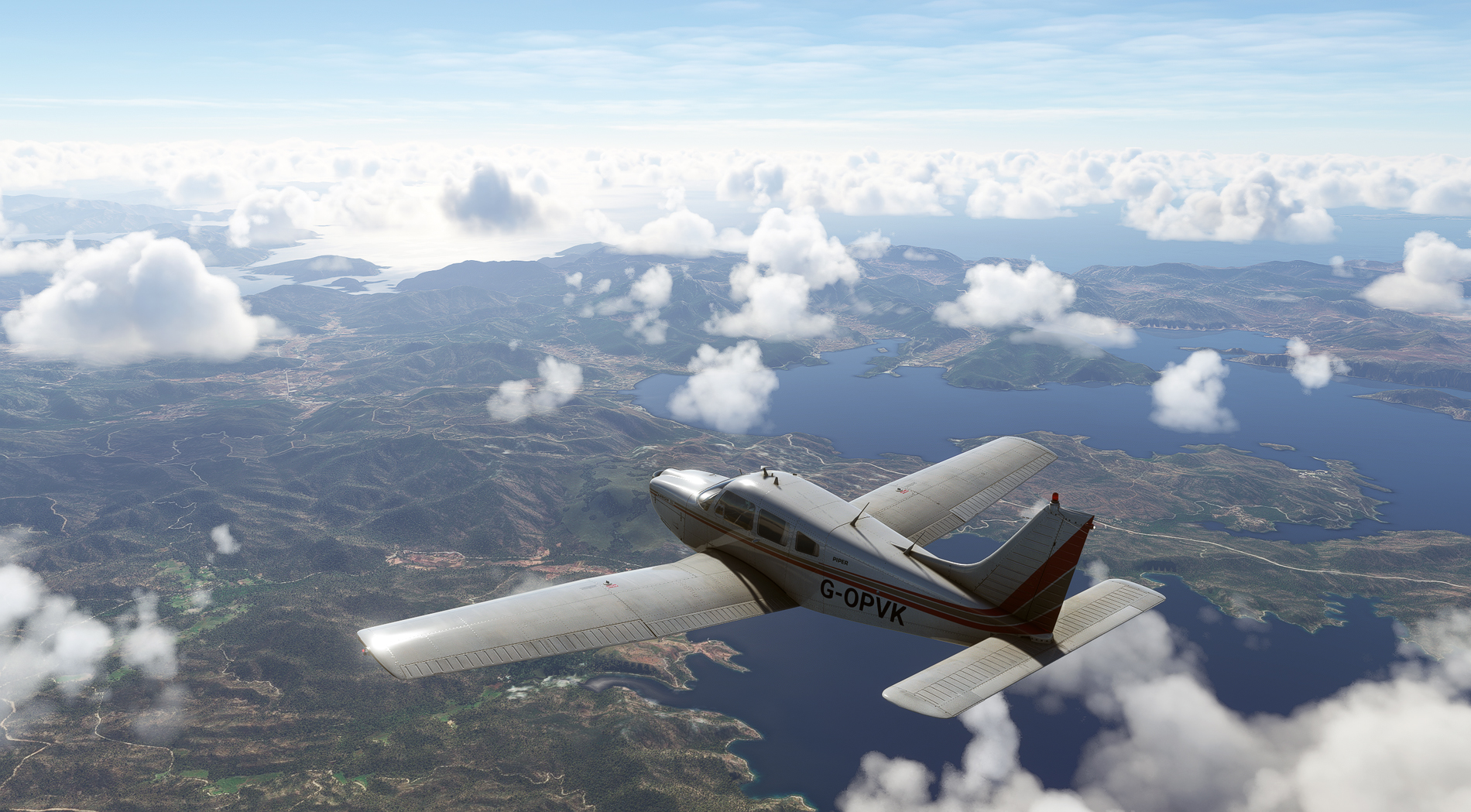 Having climbed to 9000ft to cross high ground, this is the plain around Antalya, whose airport can be seen. Easy flying, but there are yet higher mountains ahead which will give me an excuse to try out the Arrow's altitude performance: 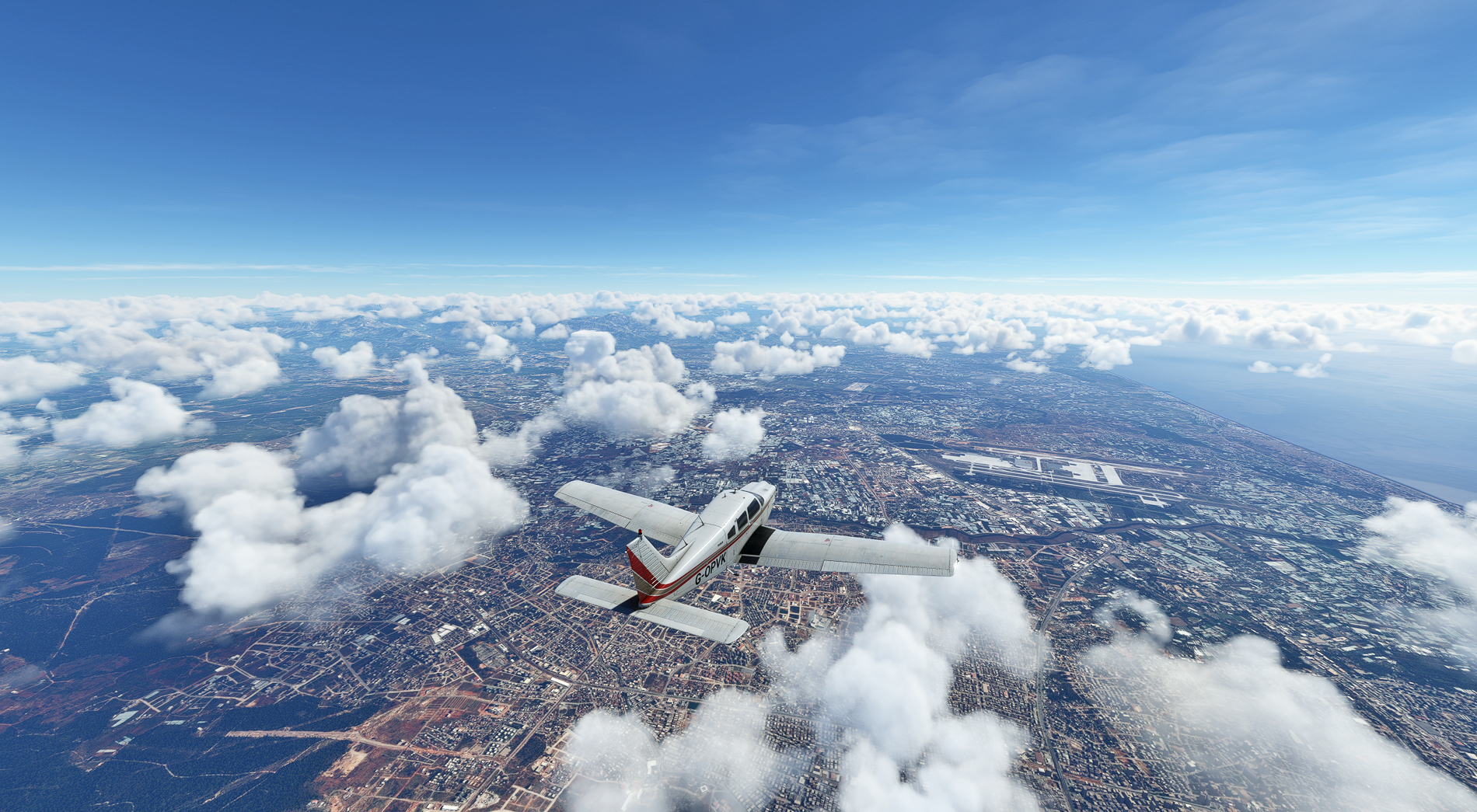 Passing from the Antalya to Karaman regions, Little Nav Map indicates a safe leg altitude of 10,500ft, but I thought I'd push it to 12,000. The Just Flight handbook gives a service ceiling of 15,000, but I kept to 12,000 and a decent airspeed. Nevertheless, perhaps the turbo version of their Arrow would have been more suitable for this trip: 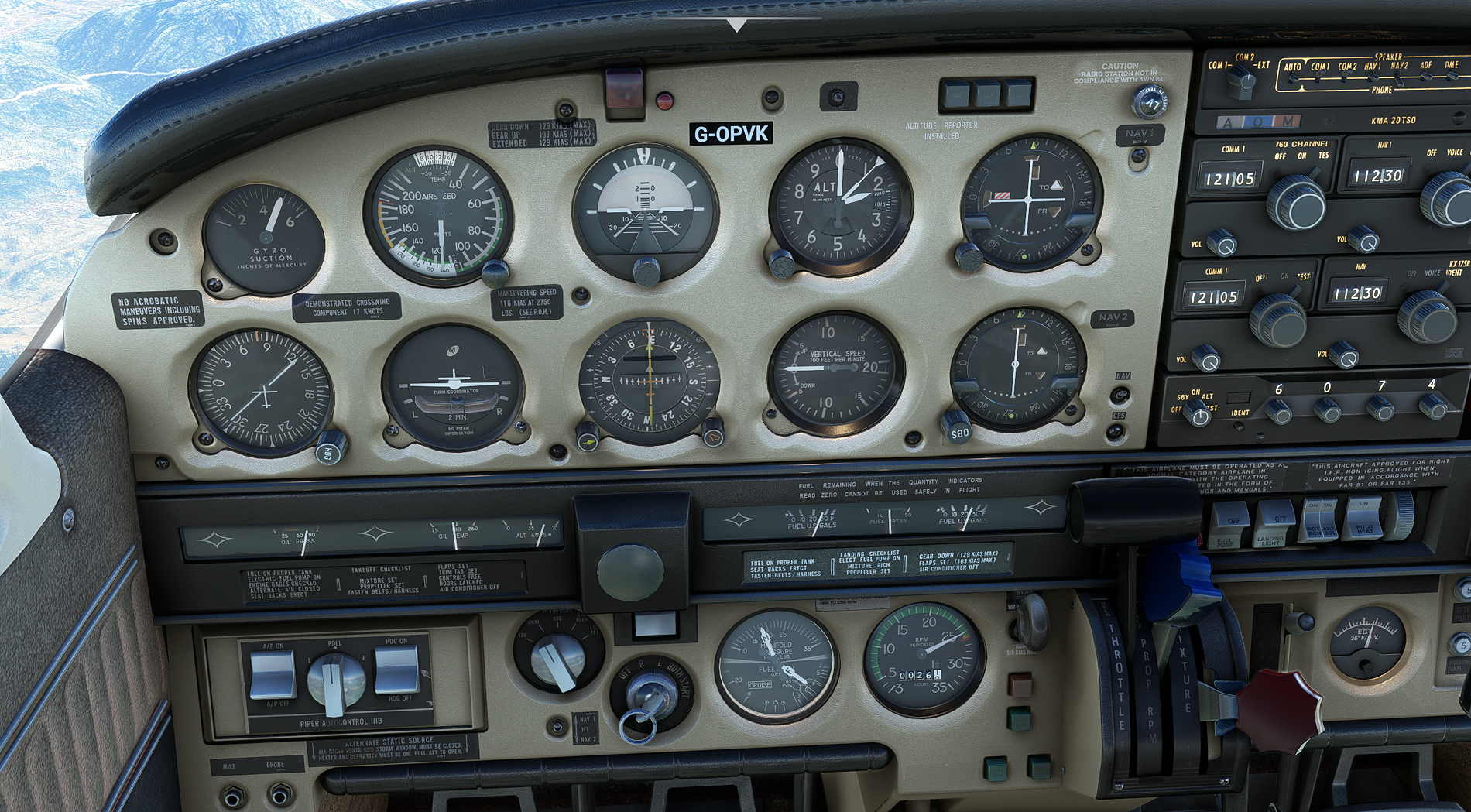 That's Turkey's Geyik mountain range stretching away behind me. The peak of Geyik Daglari was the highest point since leaving Mildenhall. It was interesting gauging the aircraft's performance, but I'll play safe and go round anything higher than 10,000ft from now on, particularly as I approach warmer latitudes: 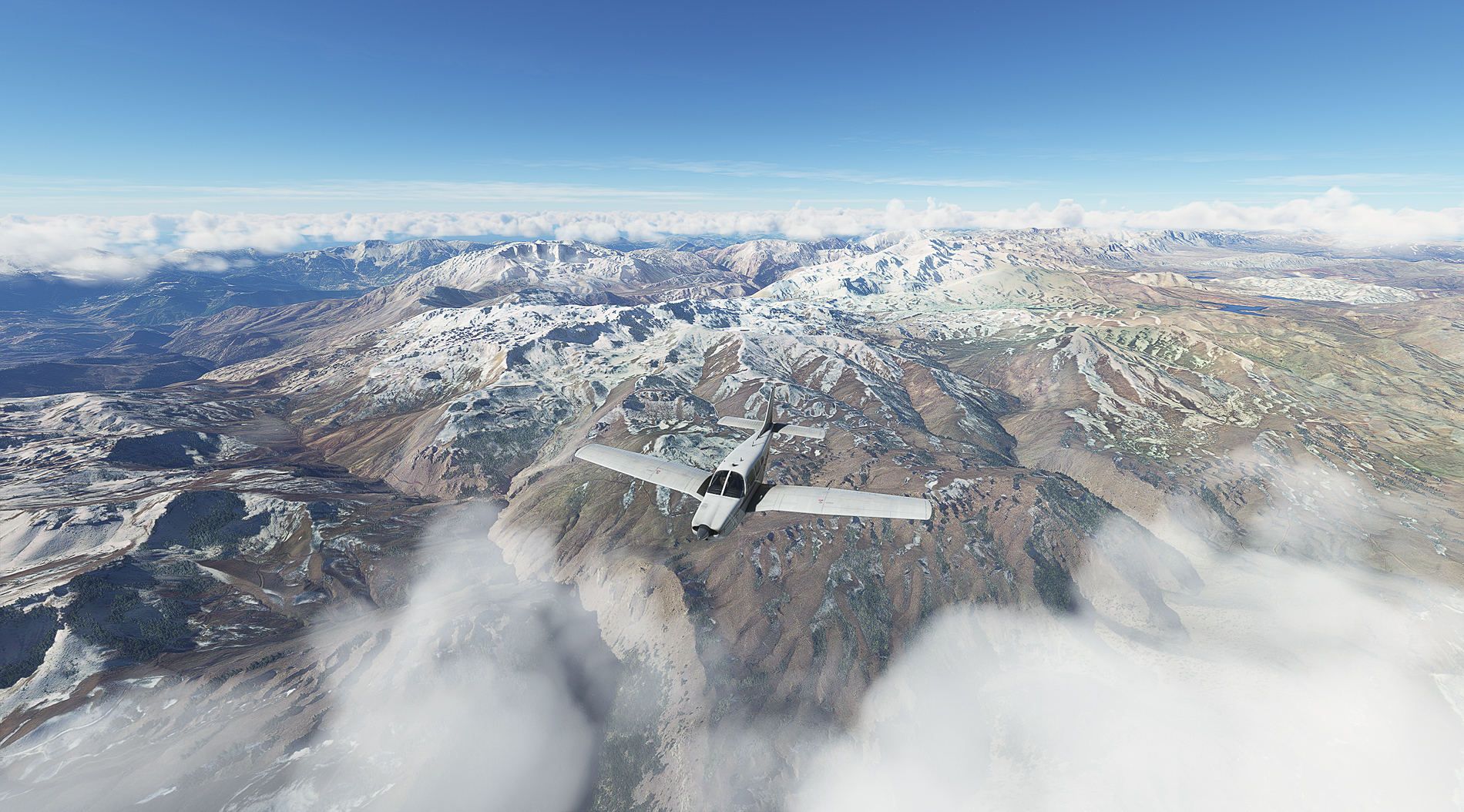 Recrossing the Turkish coast in the Levant: 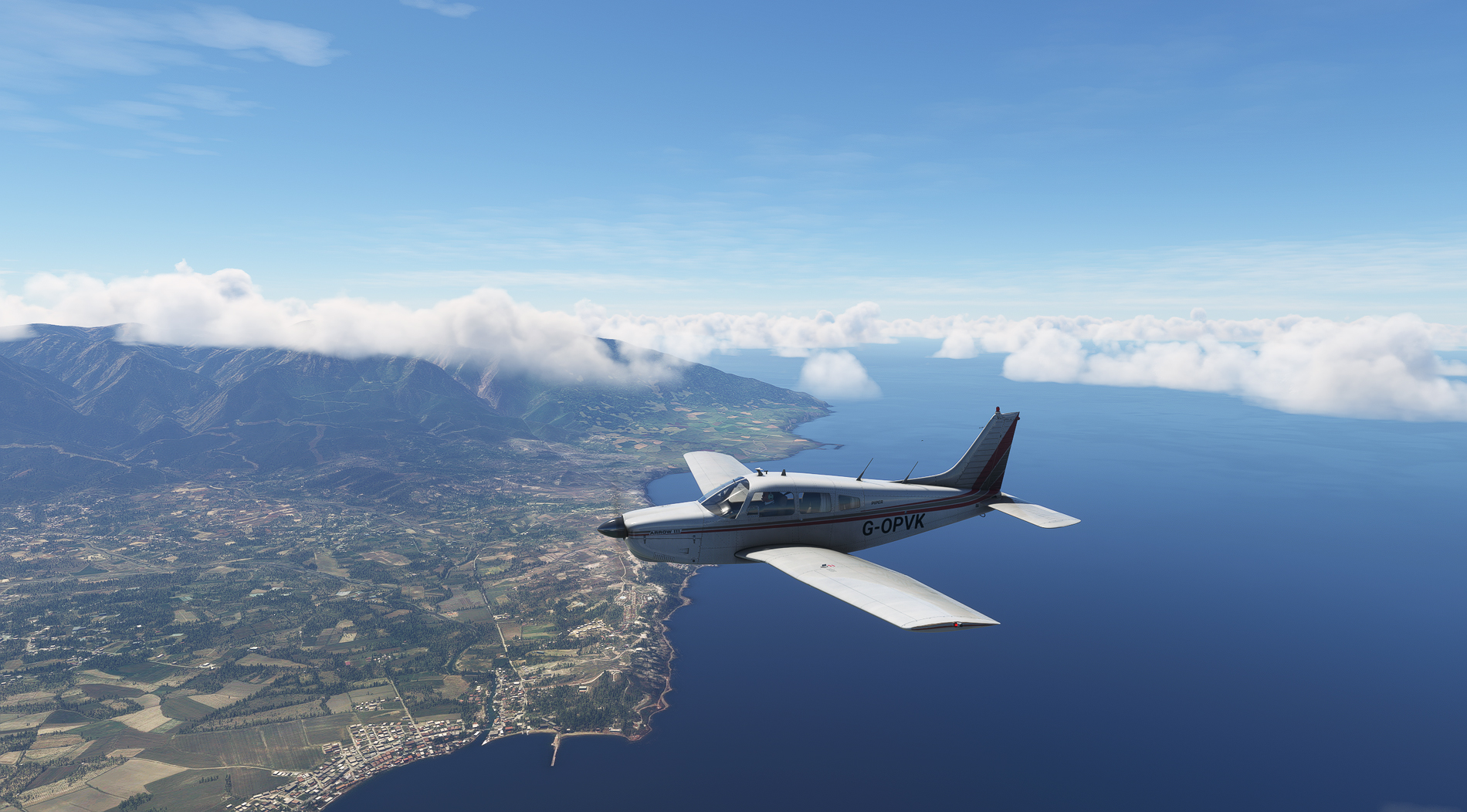 Downwind for Aleppo airport ahead: 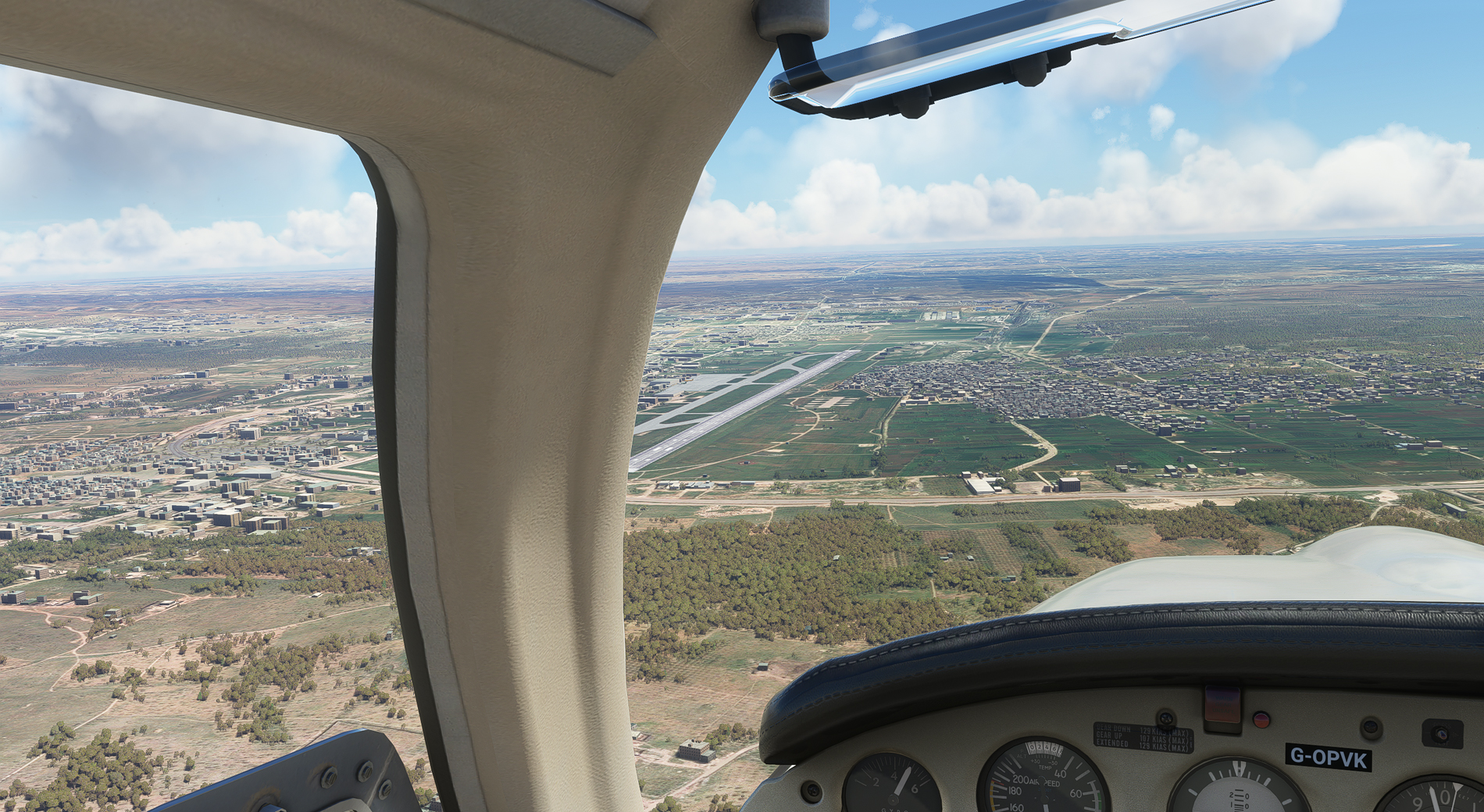 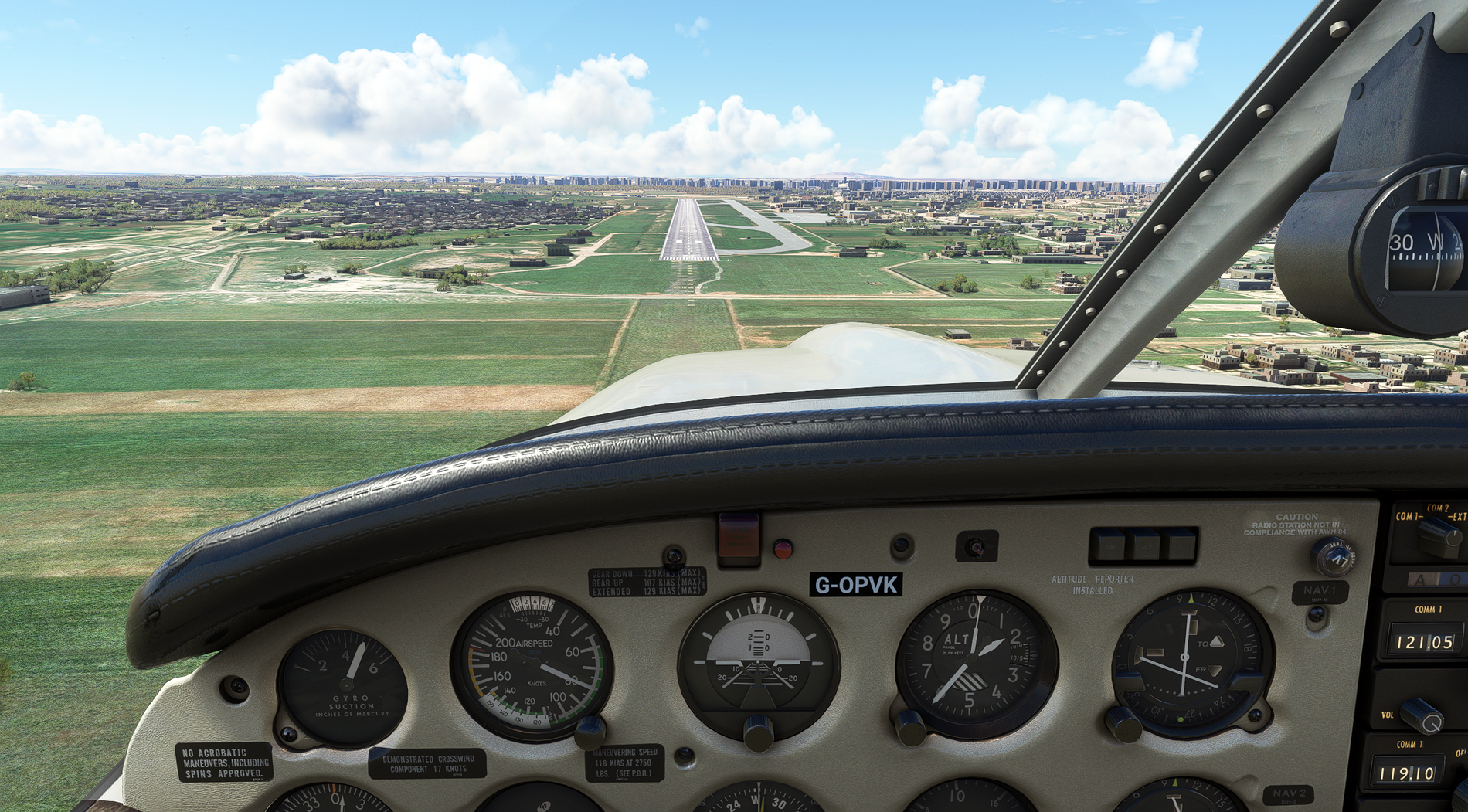 Parked up after another leg of 600+ miles and a numb bum. Don't know what that aircraft is beside me: 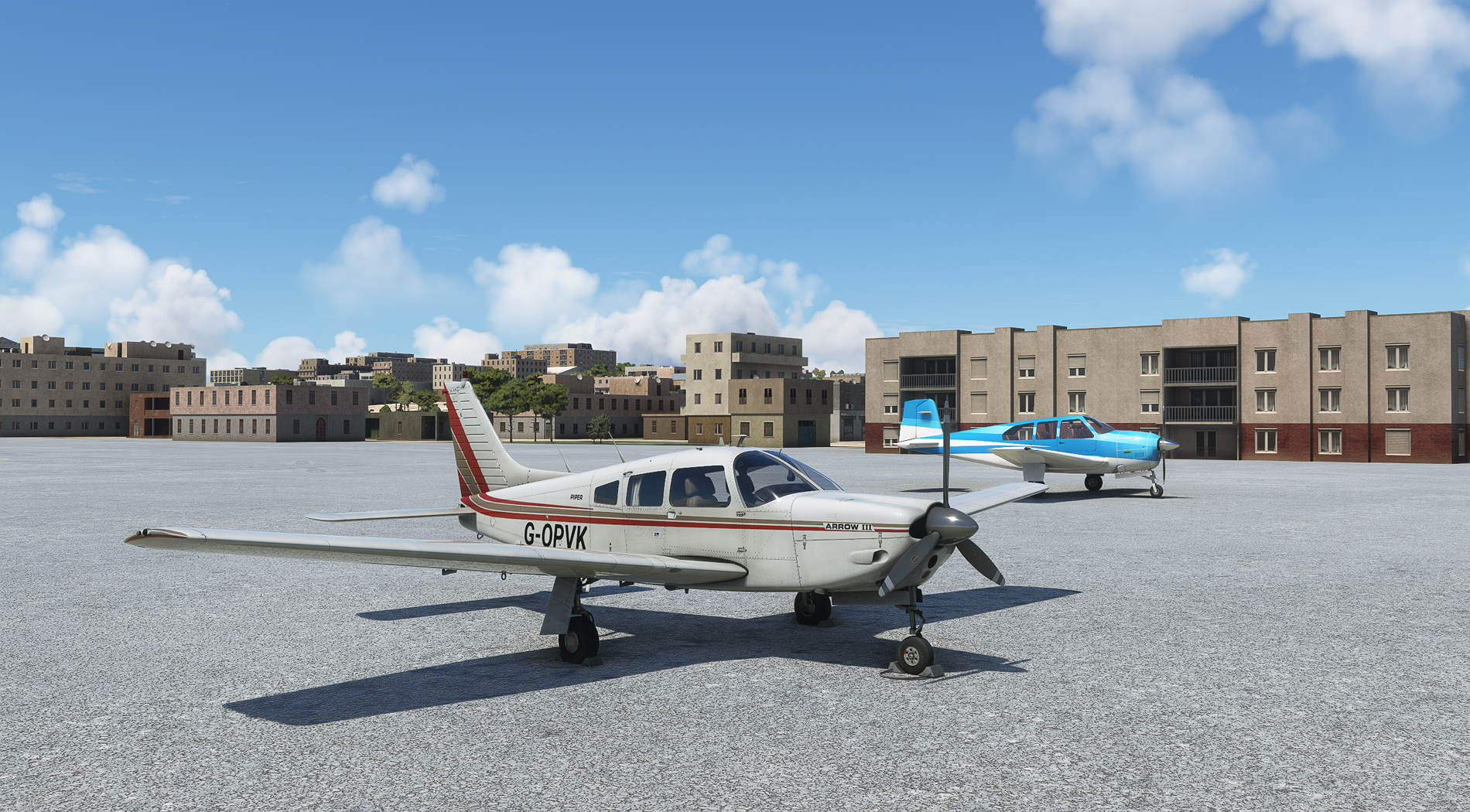 Looking forward to seeing the Middle East from the air. 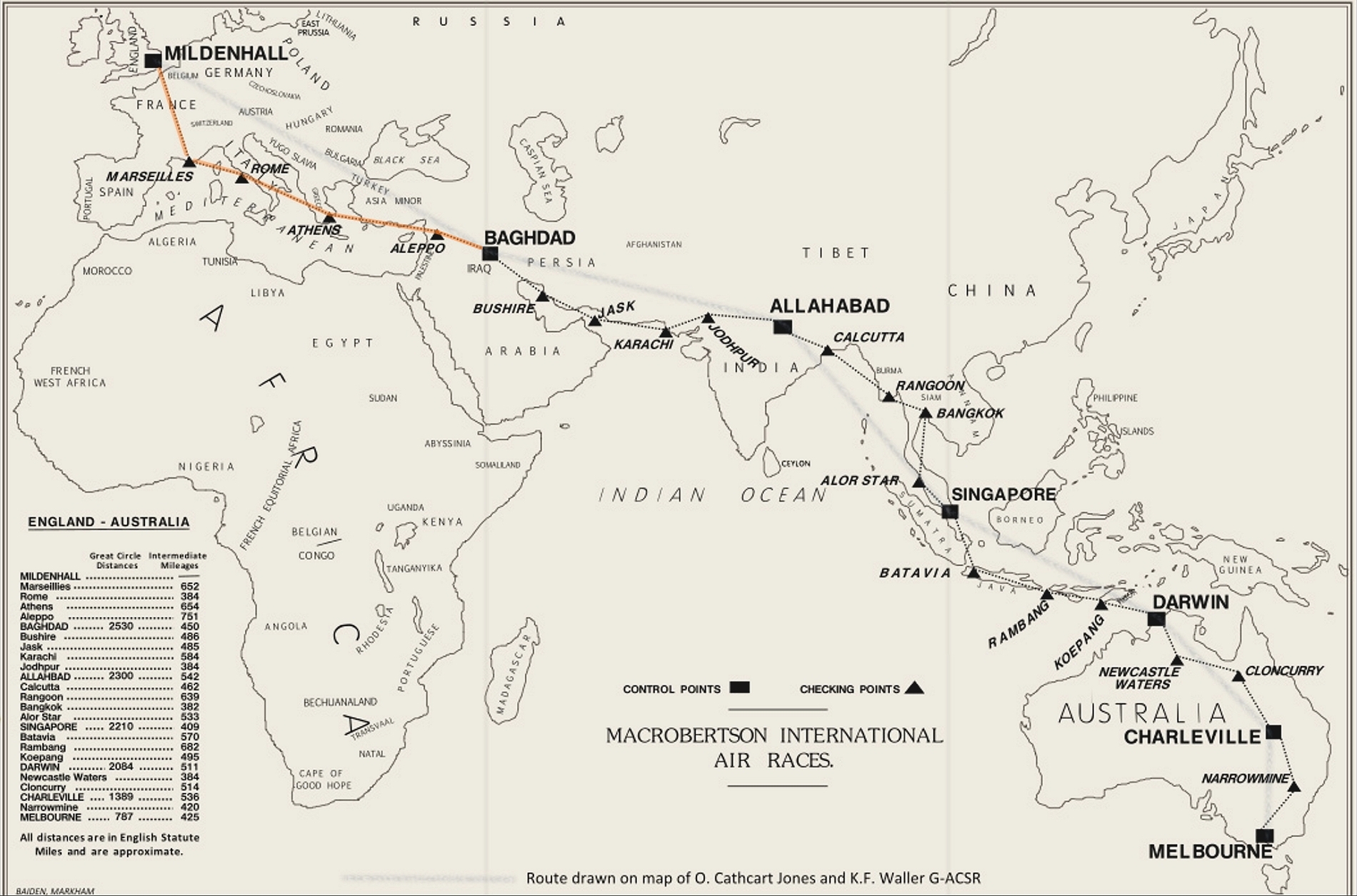 Leaving Aleppo, having been directed to the downwind runway, and then having to wait while that well-known Air New Zealand service to Aleppo landed in the opposite direction. Great sim, but boy do they need to work on the A.I. 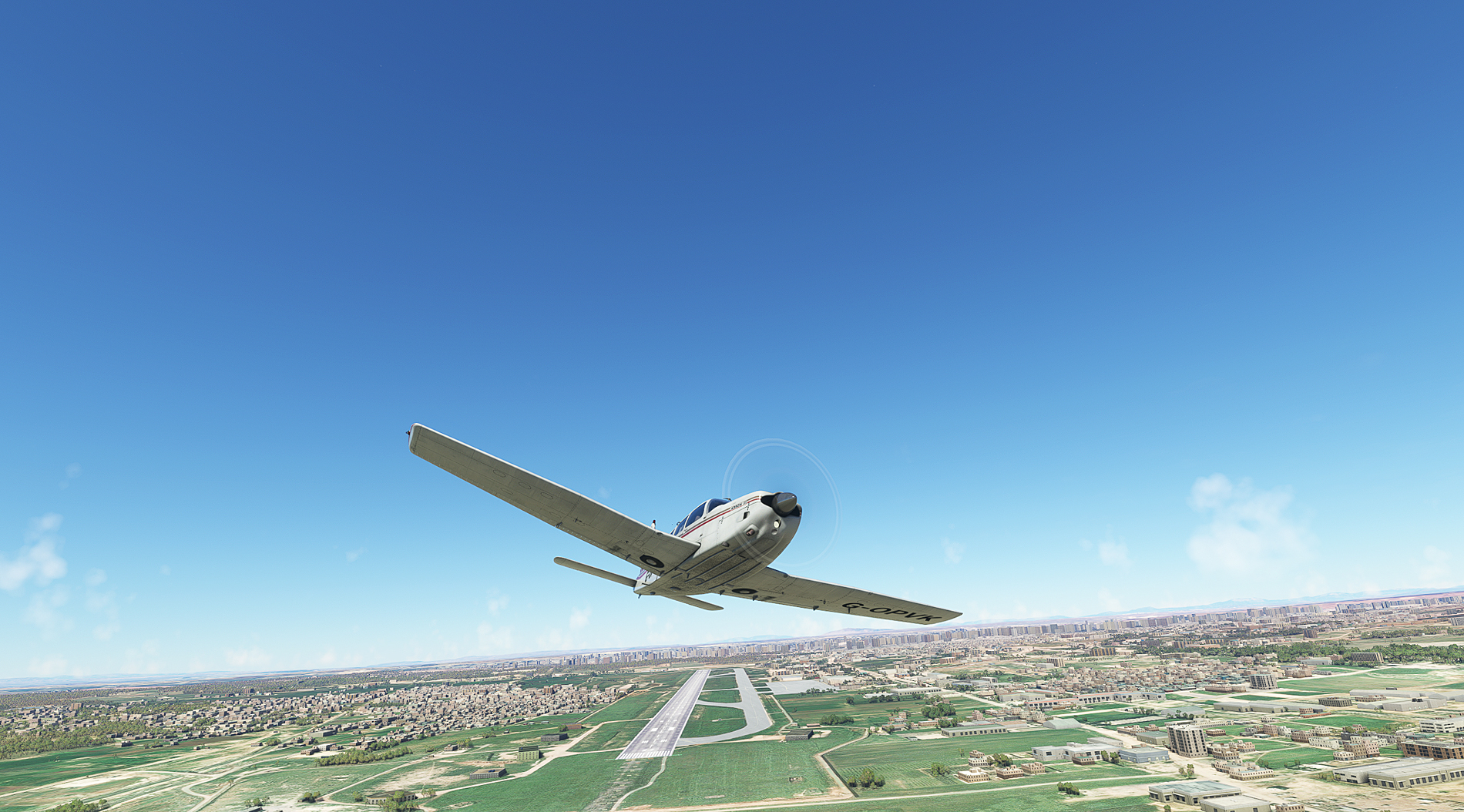 Lake Assad in the distance - the bugger even had a lake named after him: 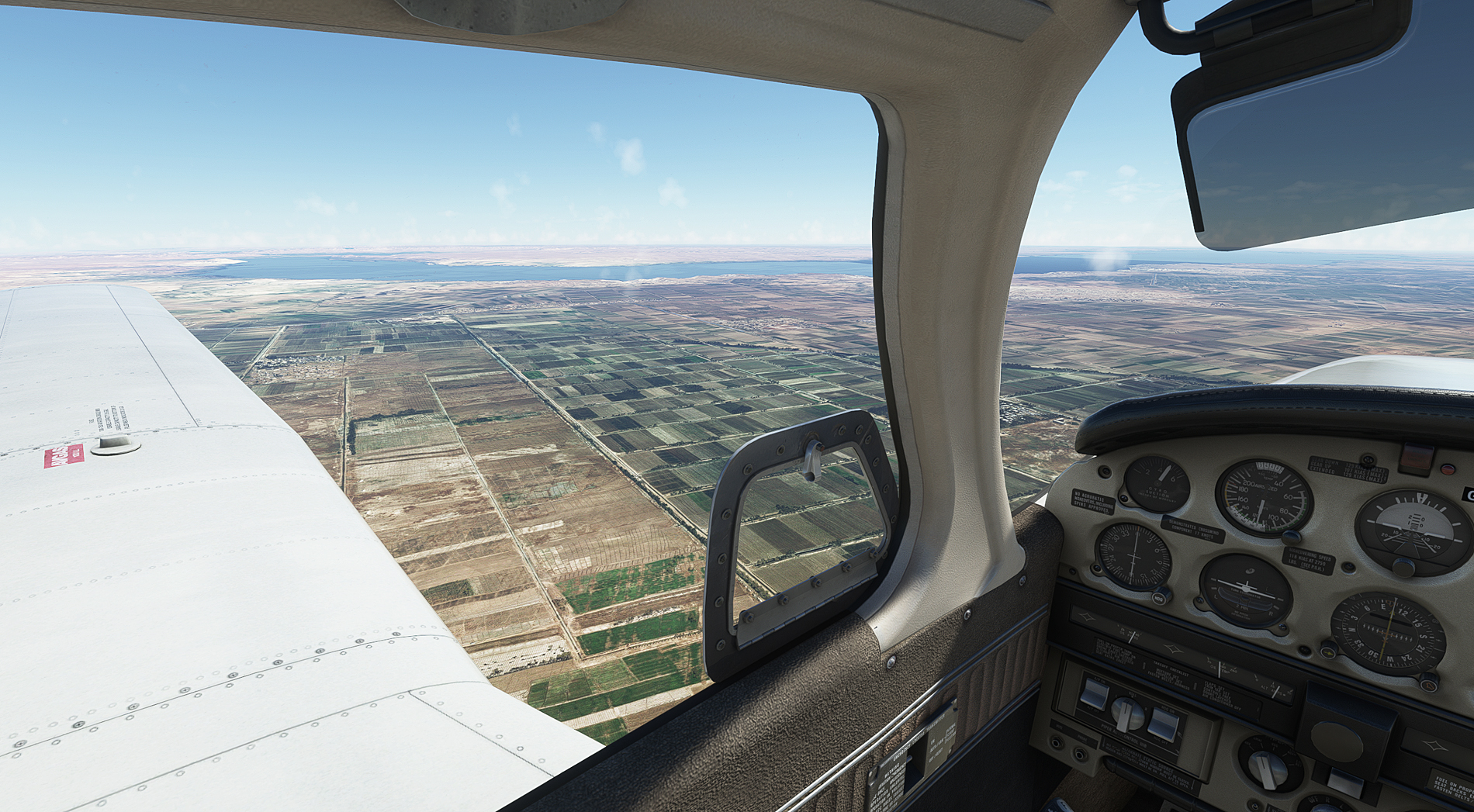 The first course change ahead at the city of Deir ez-Zur, and the DRZ VOR. The river is the Euphrates, and I'll be seeing a bit more of it during this leg: 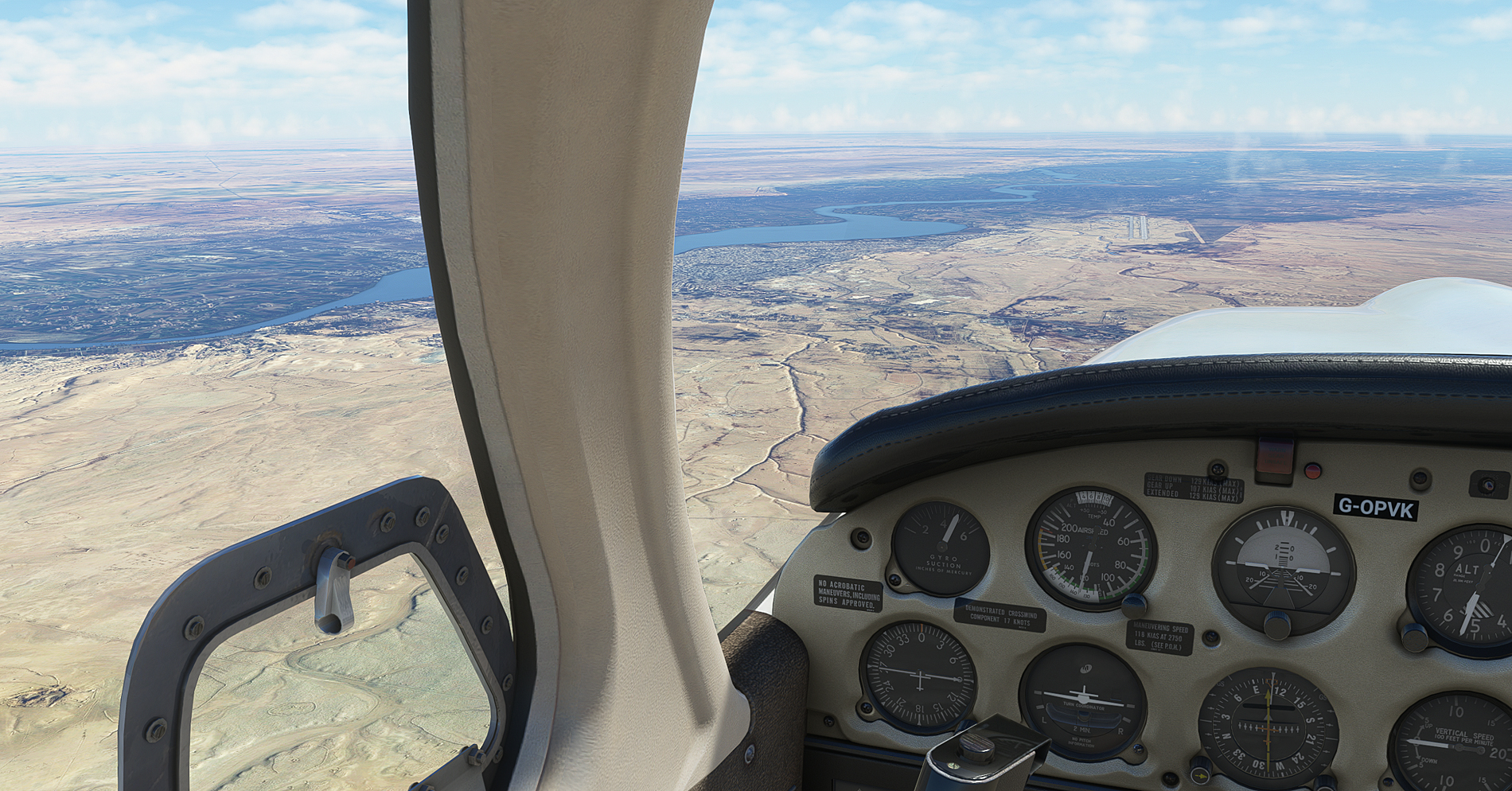 Crossing from Syria into Iraq at Albu Ghars: 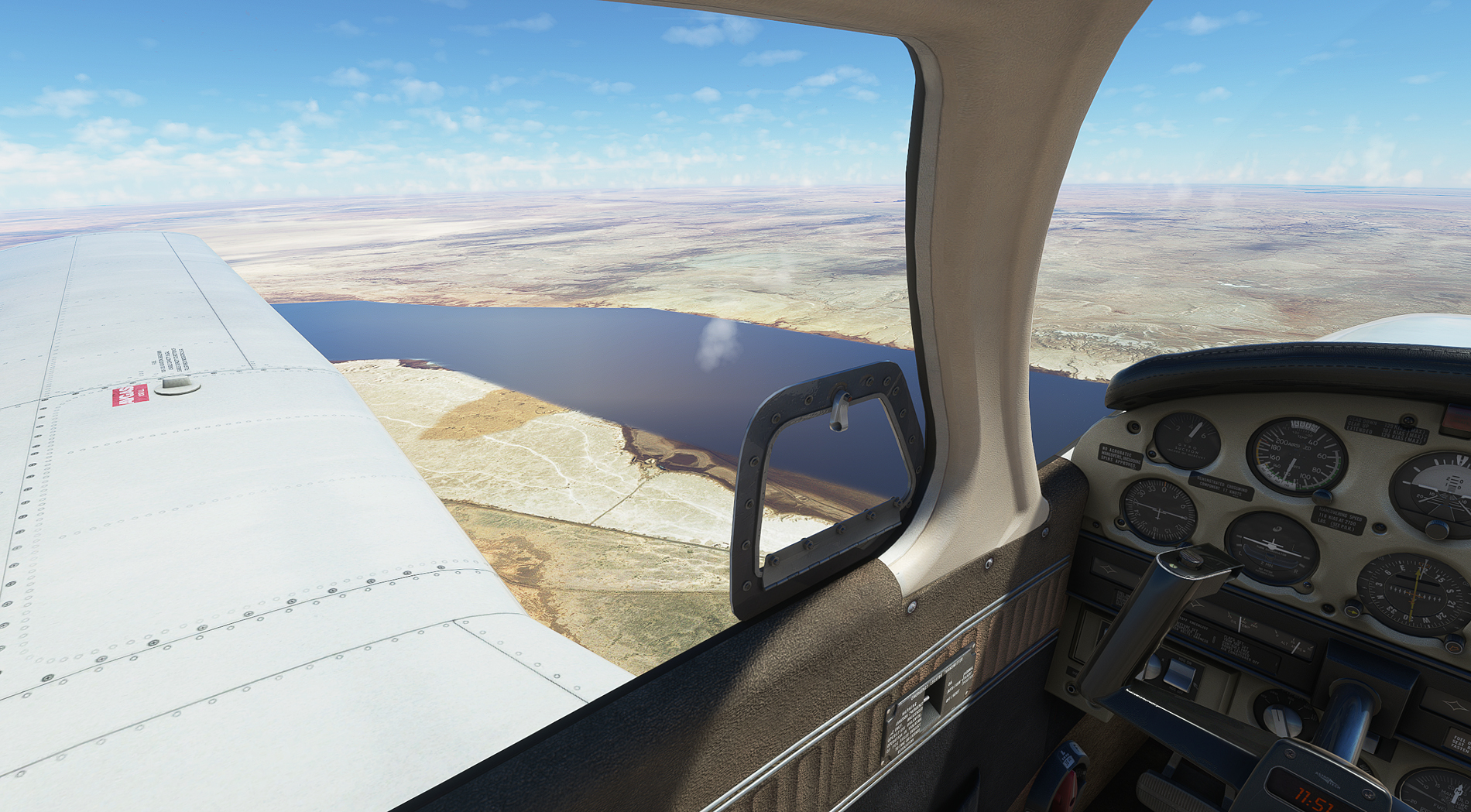 Over western Iraq, outbound on the DRZ 115 radial. The signal from the DRZ VOR eventually lasted until I was 190 nm away, far exceeding its stated range of 130: 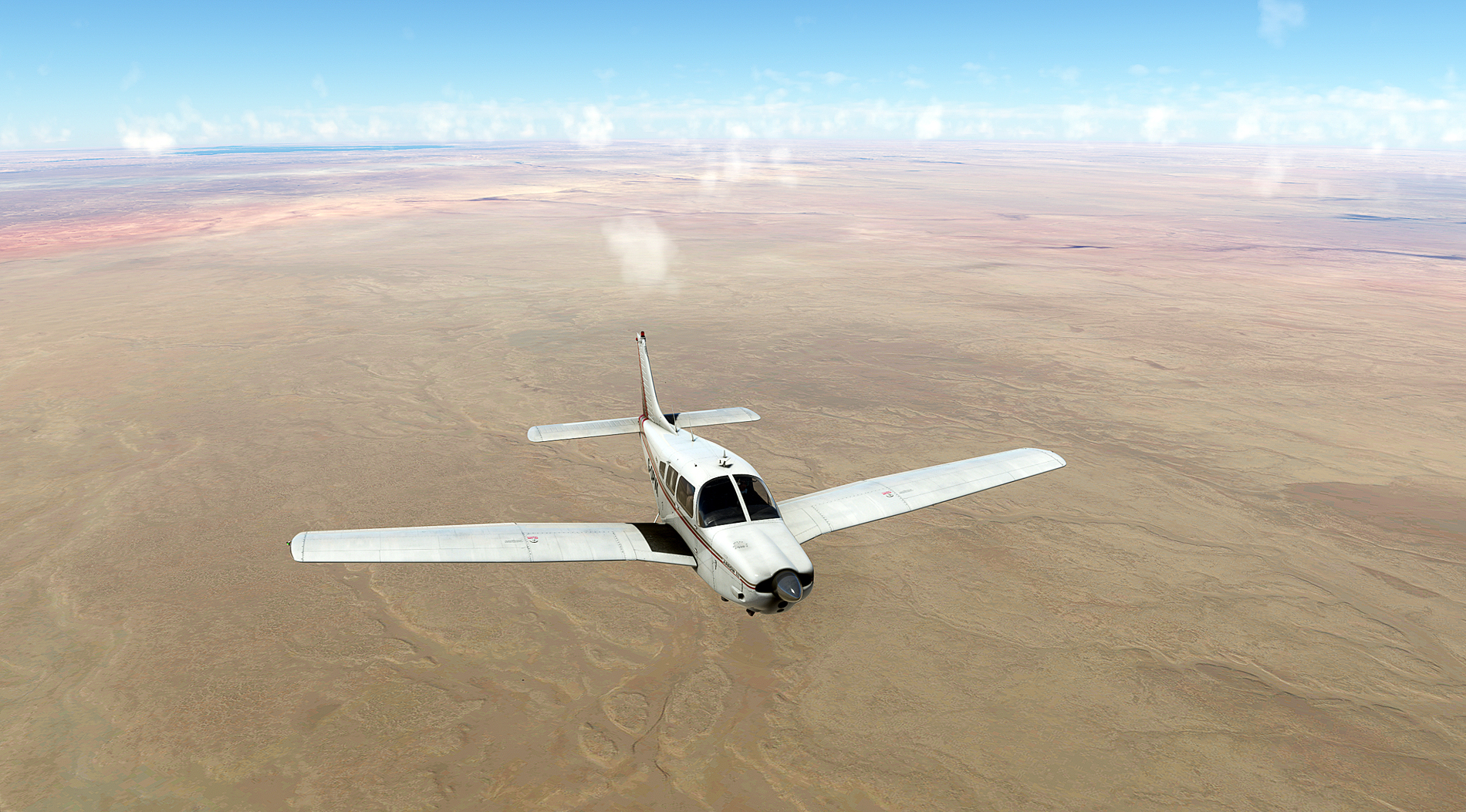 Converging once again with the meandering Euphrates, and its fertile banks. If I remember my history lessons properly, that resembles strip farming down there - small plots of land allotted to one farmer or family: 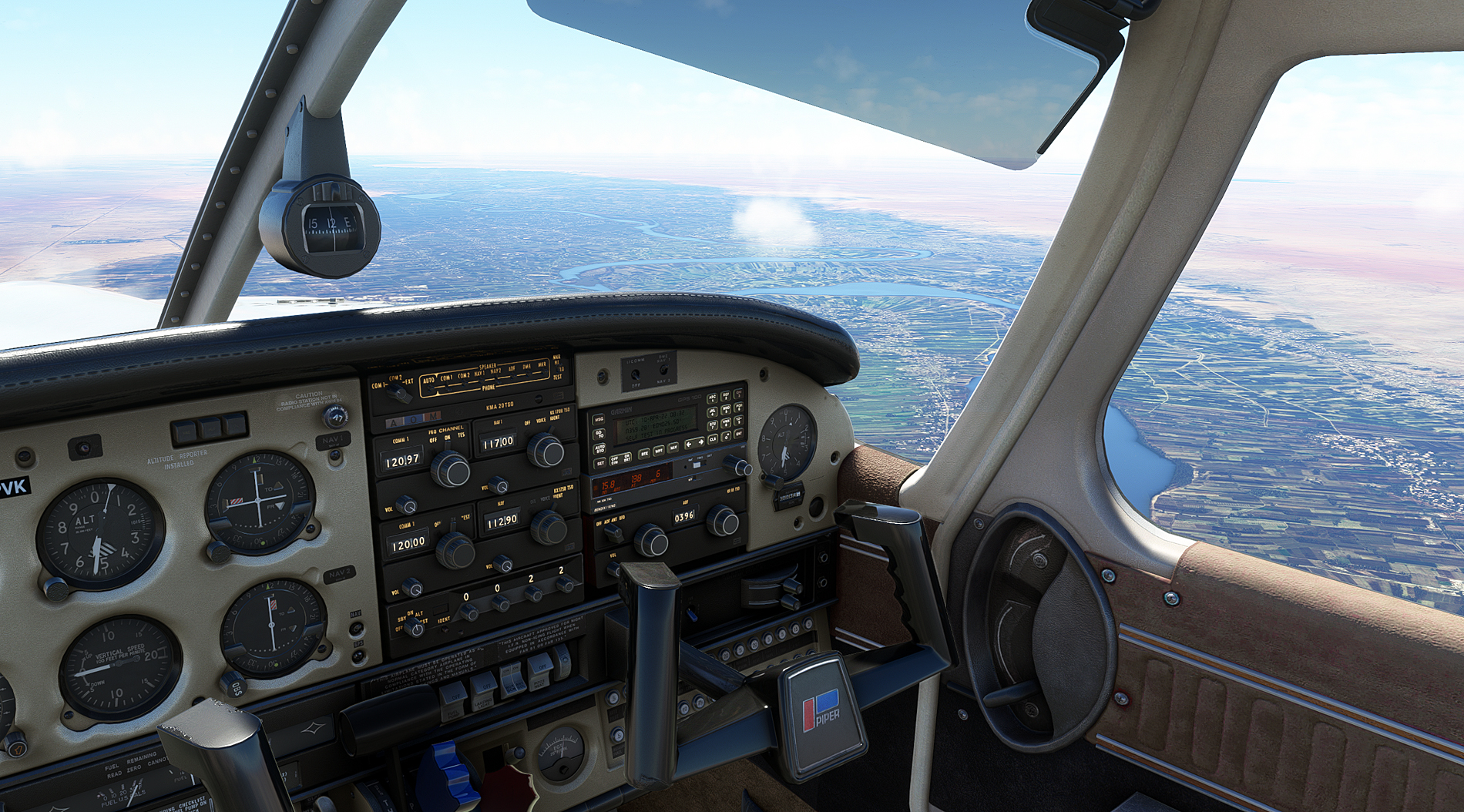 Getting close to Baghdad - that's Lake Habbaniyah, the Euphrates again, and an area named Saqlawia on this side of the river. Fallujah is just out of sight to the left: 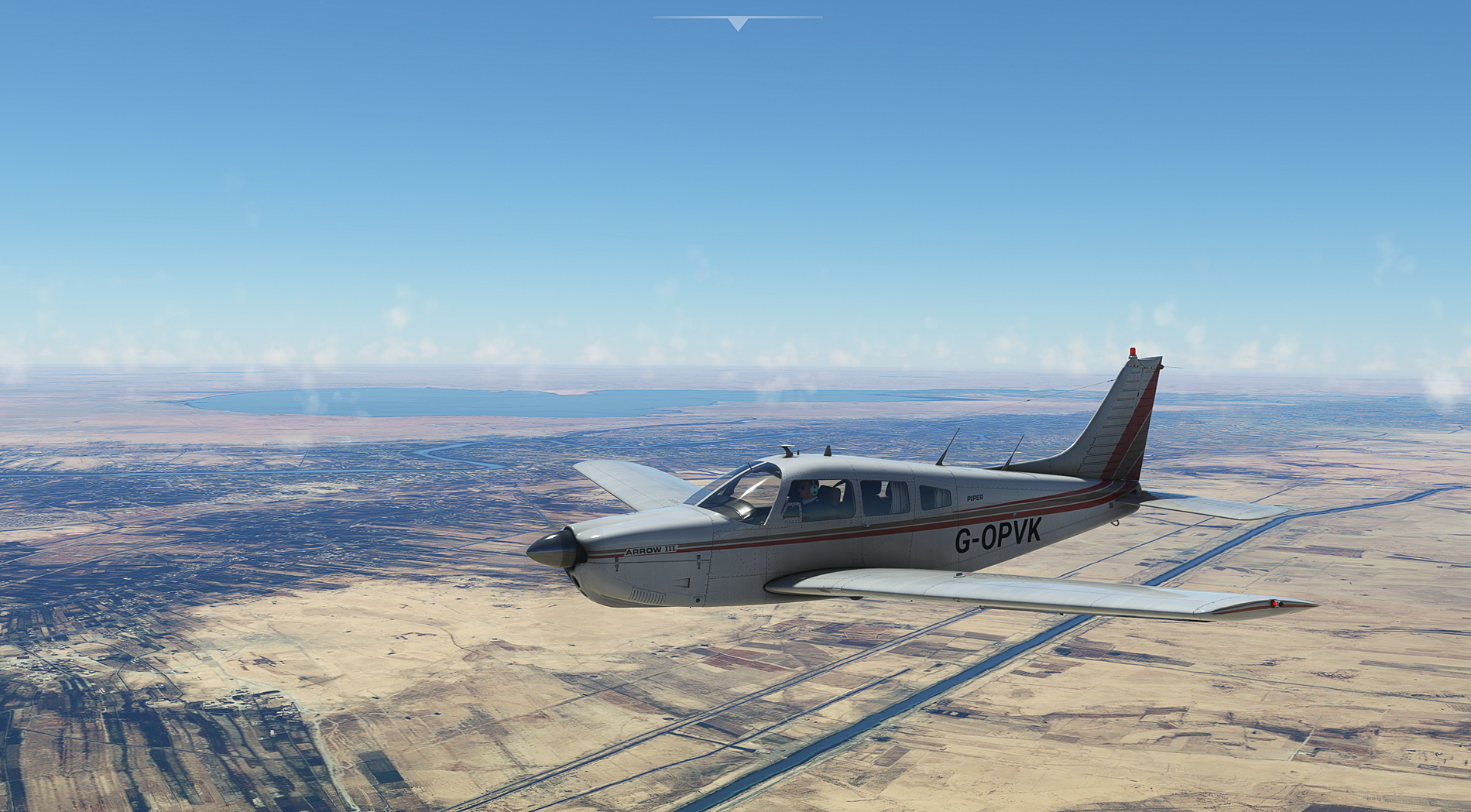 I've been using real world weather on this leg, and it's given me a very authentic sand storm at Baghdad. That's the main airport in the murk, but I won't be landing there: 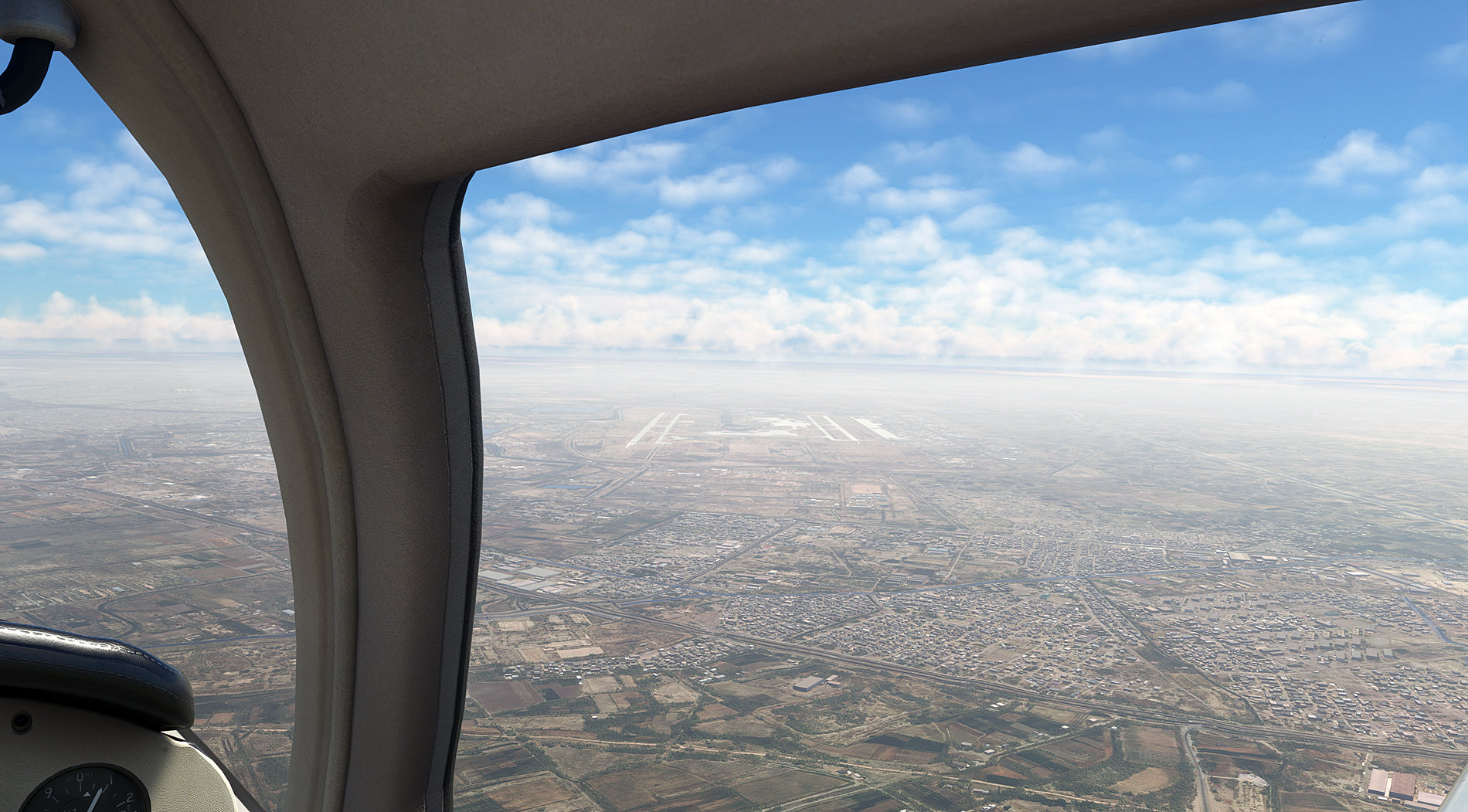 Time to buzz the city, and catch sight of some sites. The main feature in the foreground is the Unknown Warrior Memorial, with the Iraqi flag spiralling upwards. Behind that, the famous crossed scimitars of the Victory Arch (I didn't know there are two of them - one at each entrance to the Festivities Area). The tapering structure with the ball on top is the Baghdad clock tower, and on the horizon you can see the television tower. At right, the huge Al-Rahman Mosque, which was started by Saddam Hussein - it is still surrounded by cranes and was never completed. 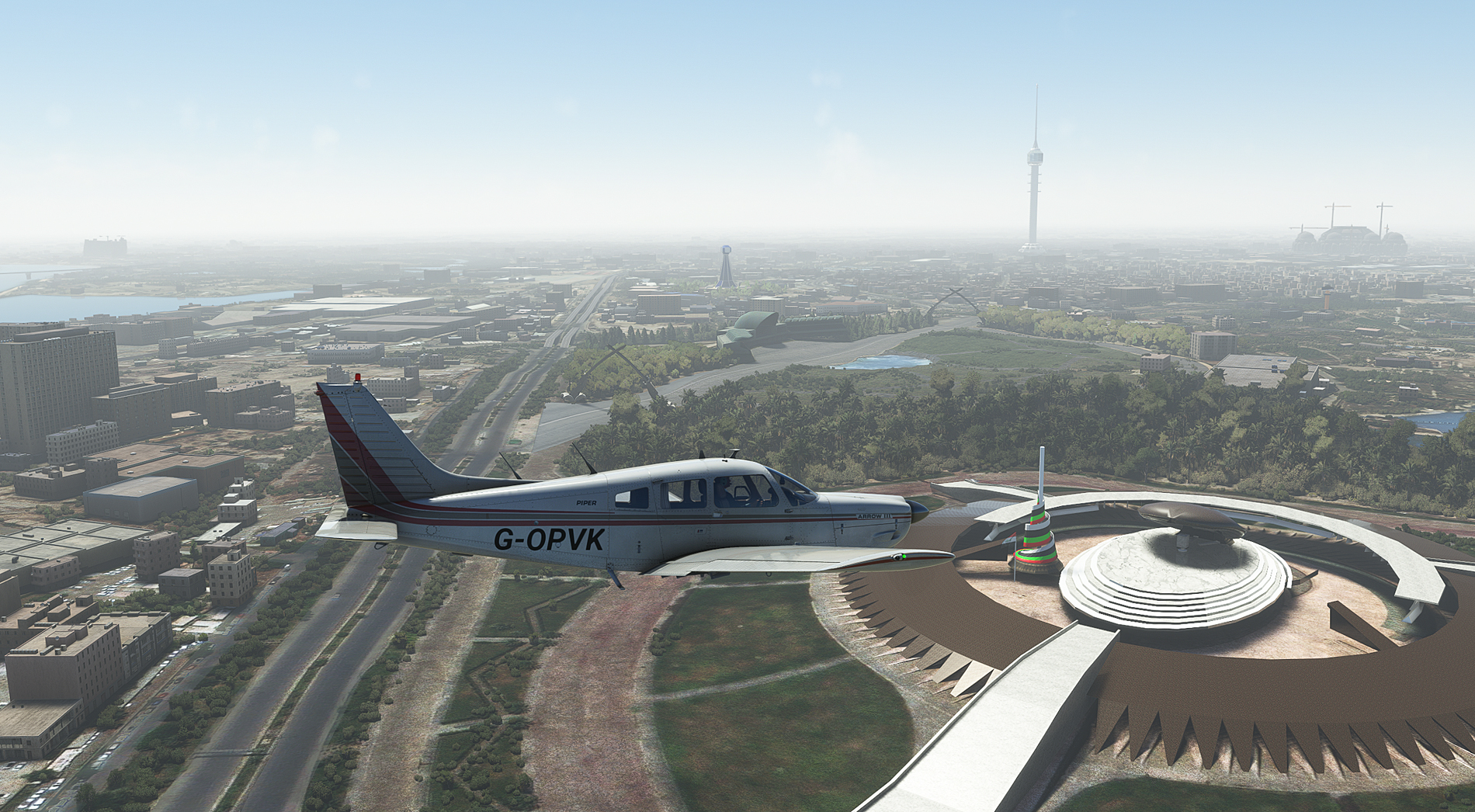 Circling round the city on my way in to land, I pass the famous Al-Shaheed monument, originally dedicated to those killed in the Iran-Iraq war, but now looked on as a memorial to all martyrs. One of the nicer memorials, I think. 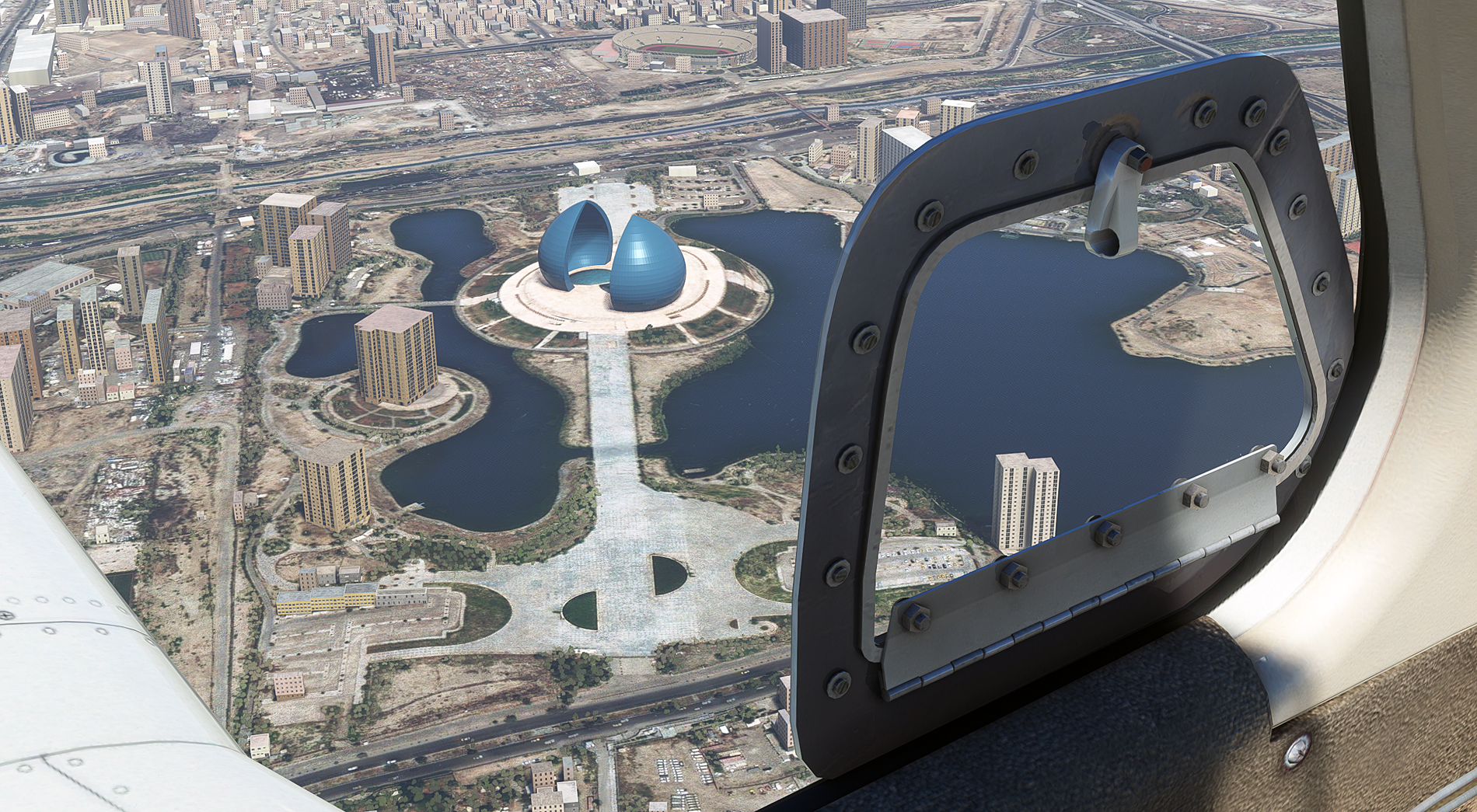 On finals for Rasheed airport RW33, in the south of the city. It was built by Britain as RAF Hinaidi in 1922. I can't find out exactly where G-ACSR and the other MacRobertson contestants landed in Baghdad, but the modern international airport didn't exist back then, so I reckon RAF Hinaidi is a safe bet: 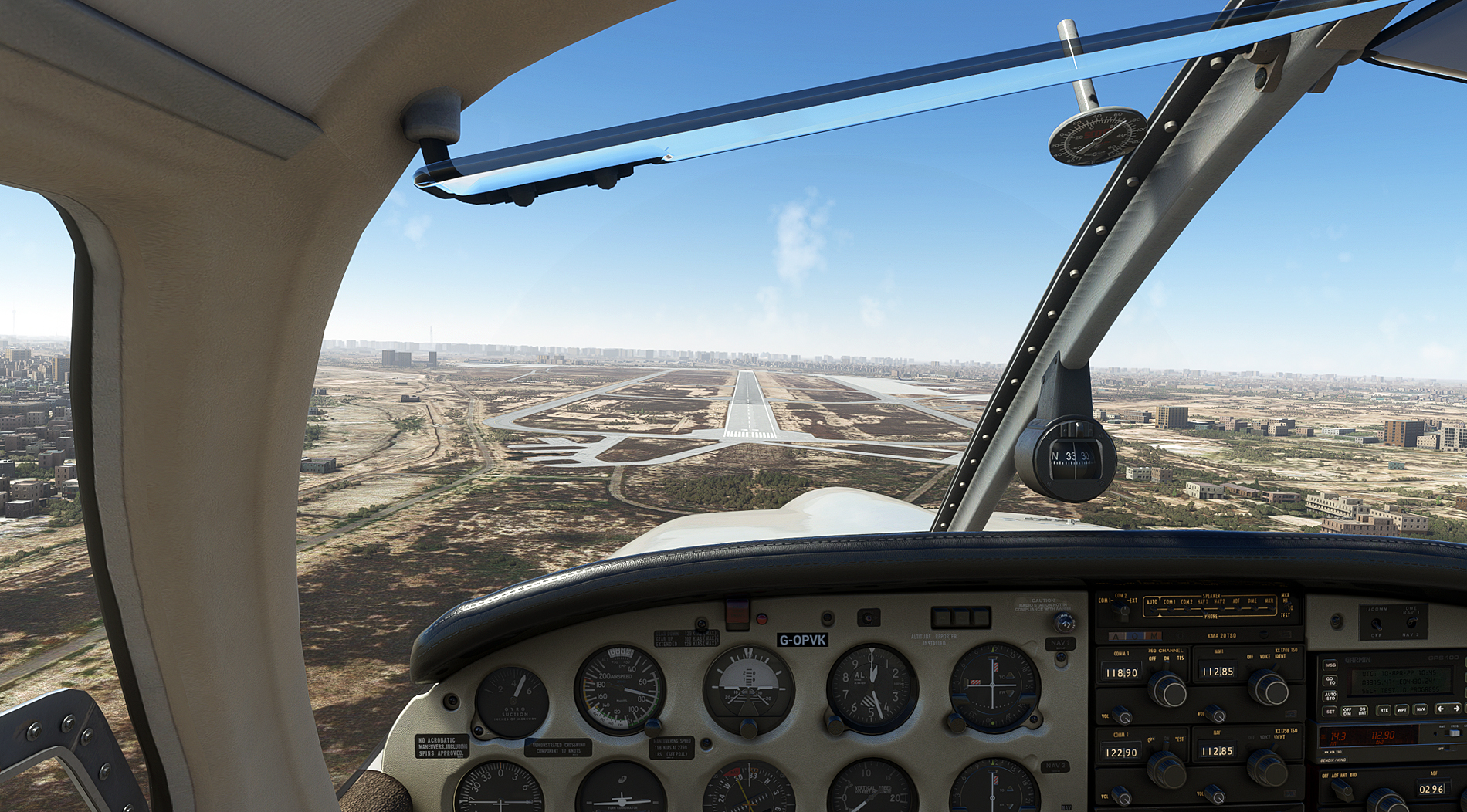 Parked up with the big boys: 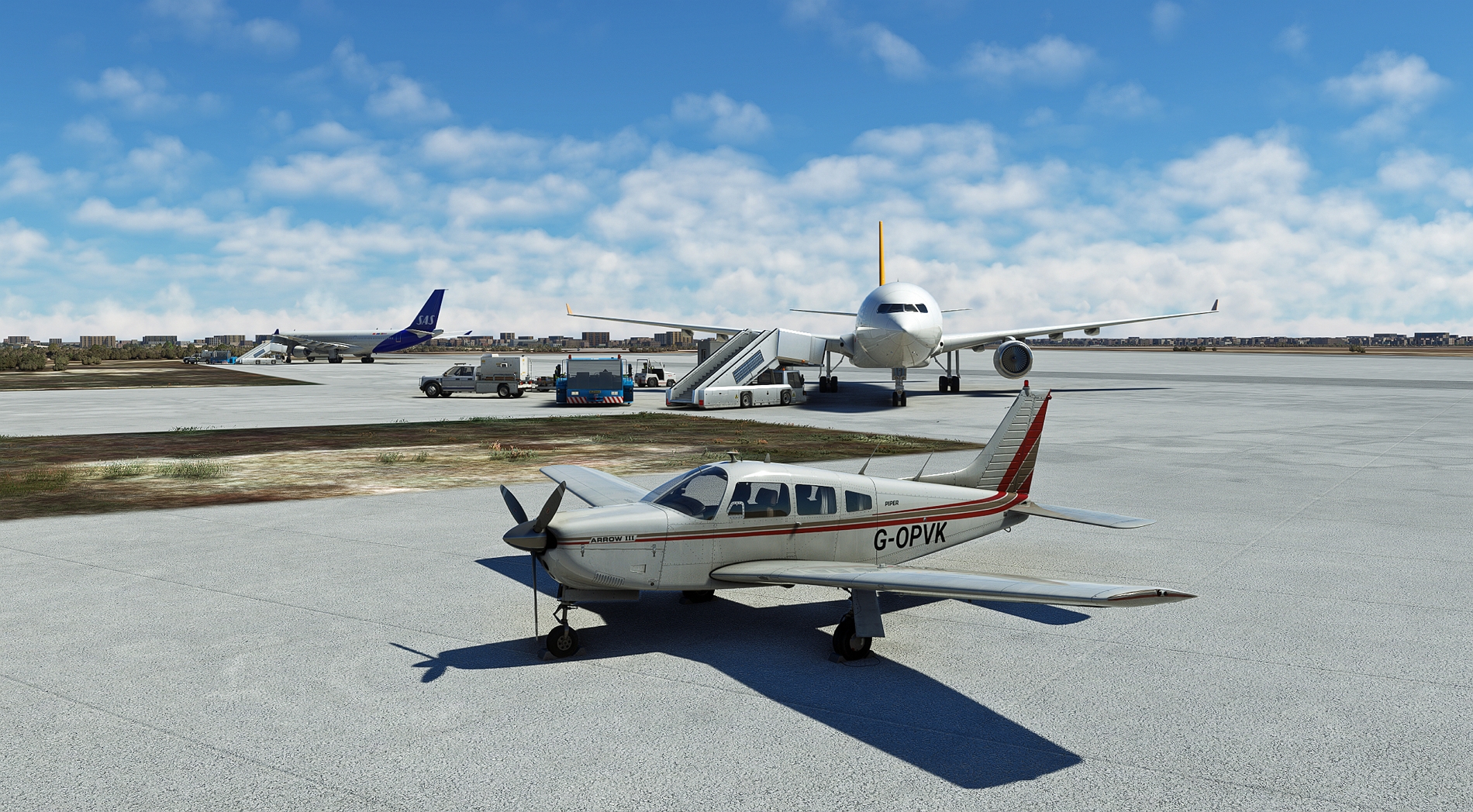