I've no idea, Ben. From what I've read, it was still operating when the Japanese invaded in 1942, and was used by them during the war. Whether the Dutch used it while trying to re-establish control after the war, I don't know.

I've found this - an online copy of Jean Batten's memoir 'My Life' and from a quick skim through, she landed there twice:

This is her at Rambang on her flight from Australia to the UK in 1937. The aircraft was a Percival Gull. 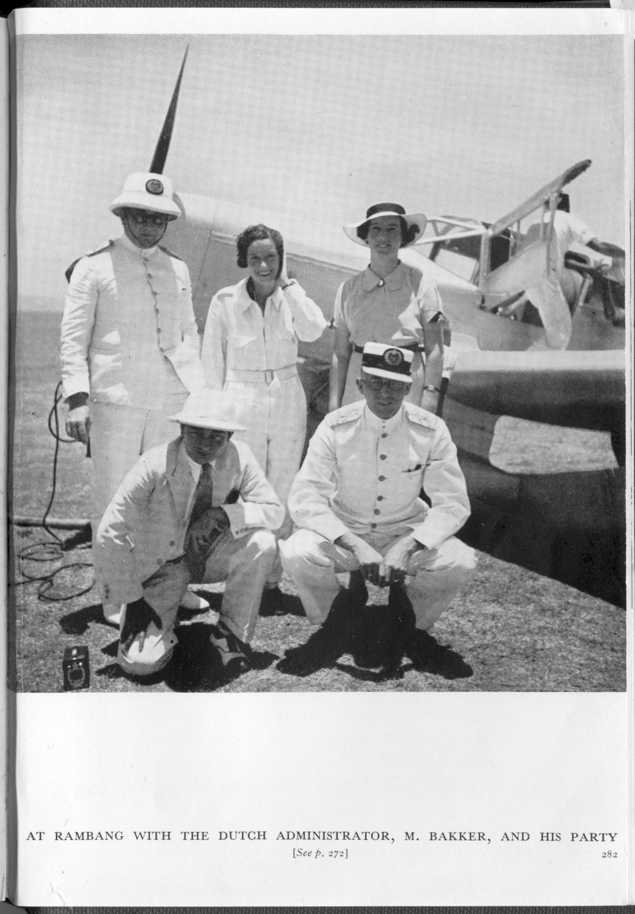 What an adventure! I hope the stutters can be fixed, Paul.

Hi Brian - from reading through the various forums, it seems to be a problem afflicting many people since sim update 9. Asobo has accepted that there is an issue, and are investigating. I think I've got it under control by returning everything in Nvidia control panel to default states, shutting as many background processes down as I can find, raising MSFS's priority a notch, and running it from a cold restart of the PC. I shall find out whether this is sufficient on the next long flight. Further along, sim update 10 will hopefully bring us a fix.

I still absolutely love this sim, of course! 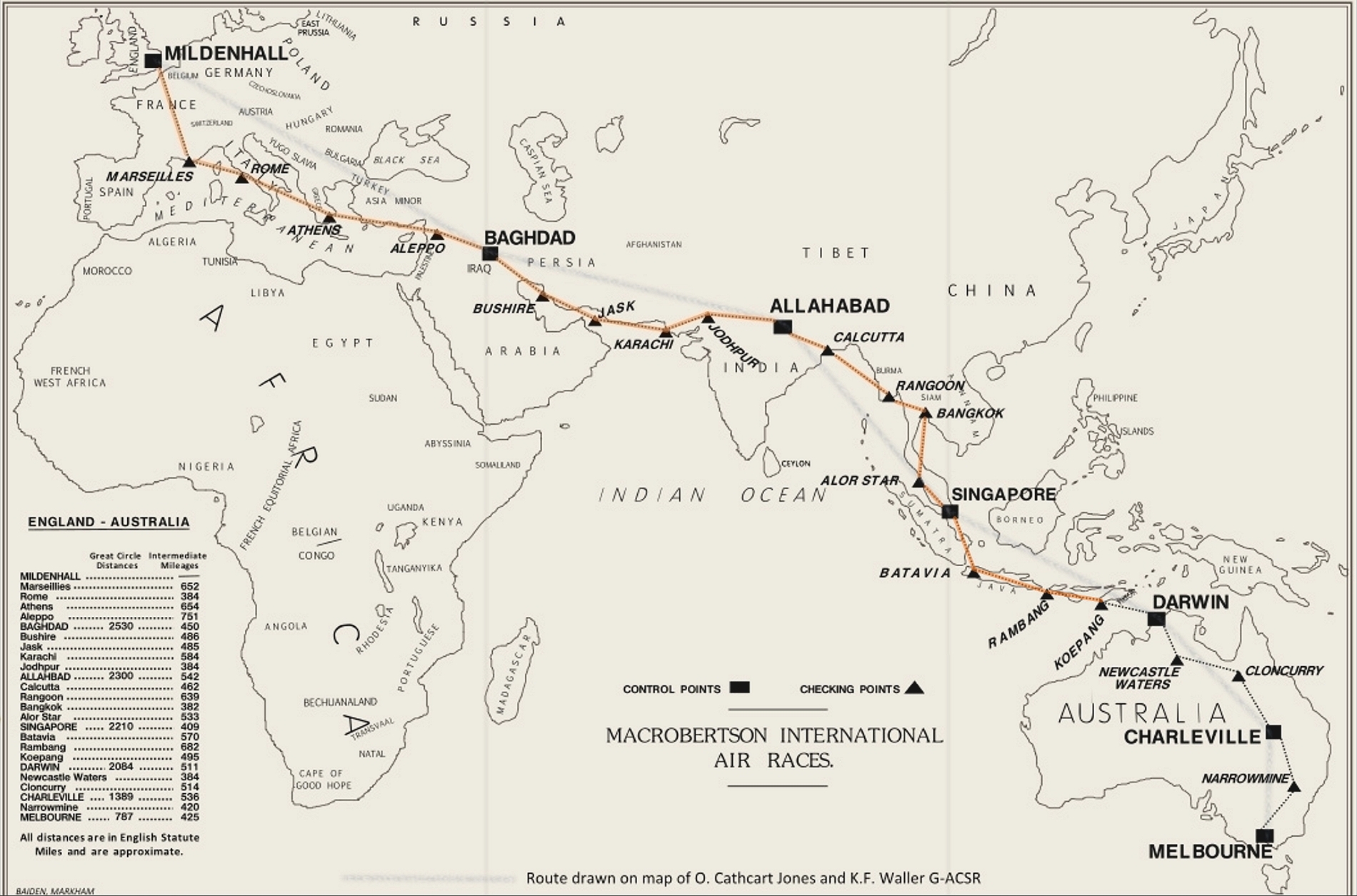 Taking off from Lombok. I seem to have veered off the centre-line somewhat 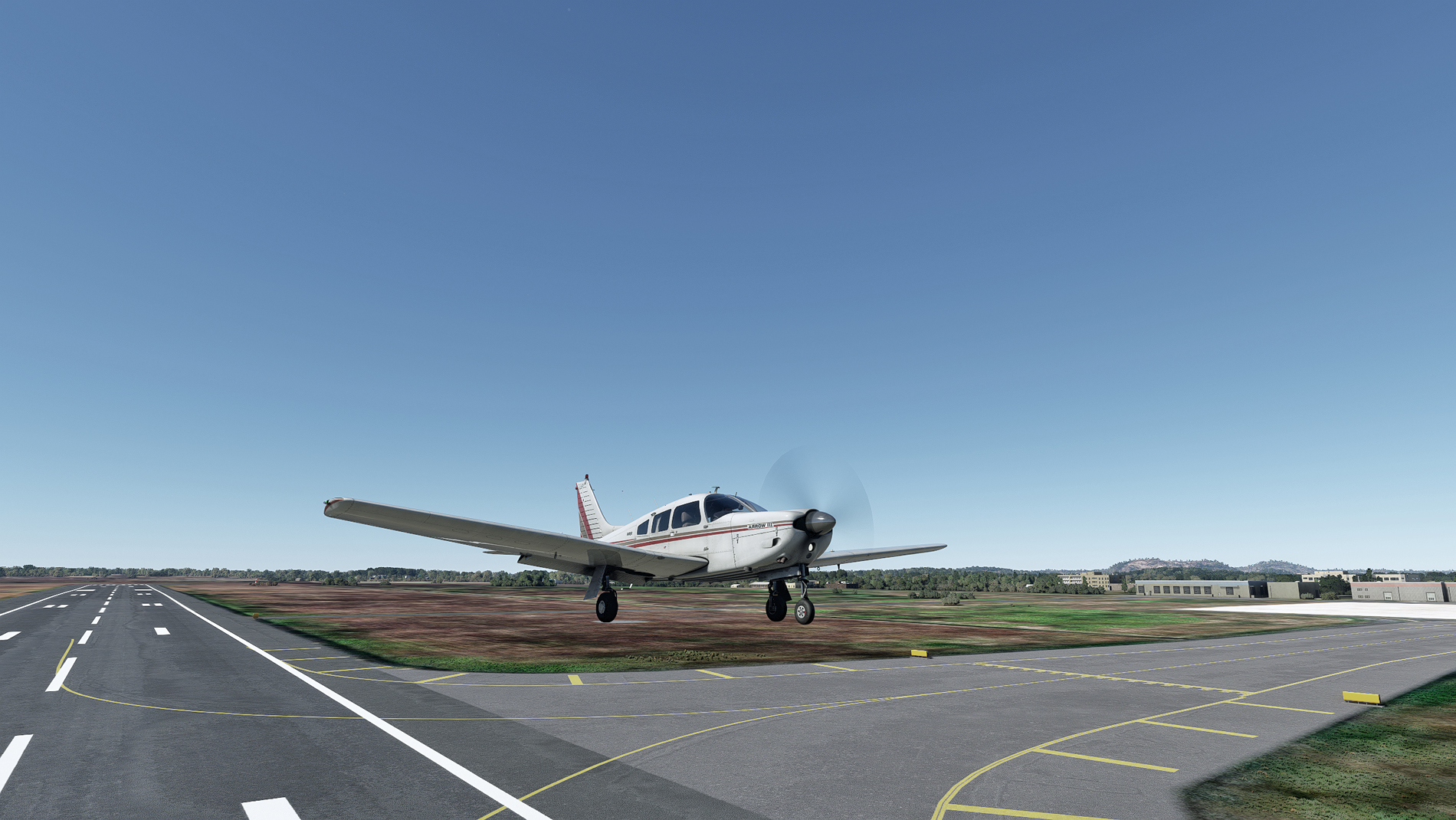 Heading east south-east across Lombok island, leaving the airport and the adjacent lake of Bendungan Batujai behind. I did consider a farewell pass over Rambang, but it was a bit too far off my intended track. I landed there yesterday, so I think I've done it justice for this trip: 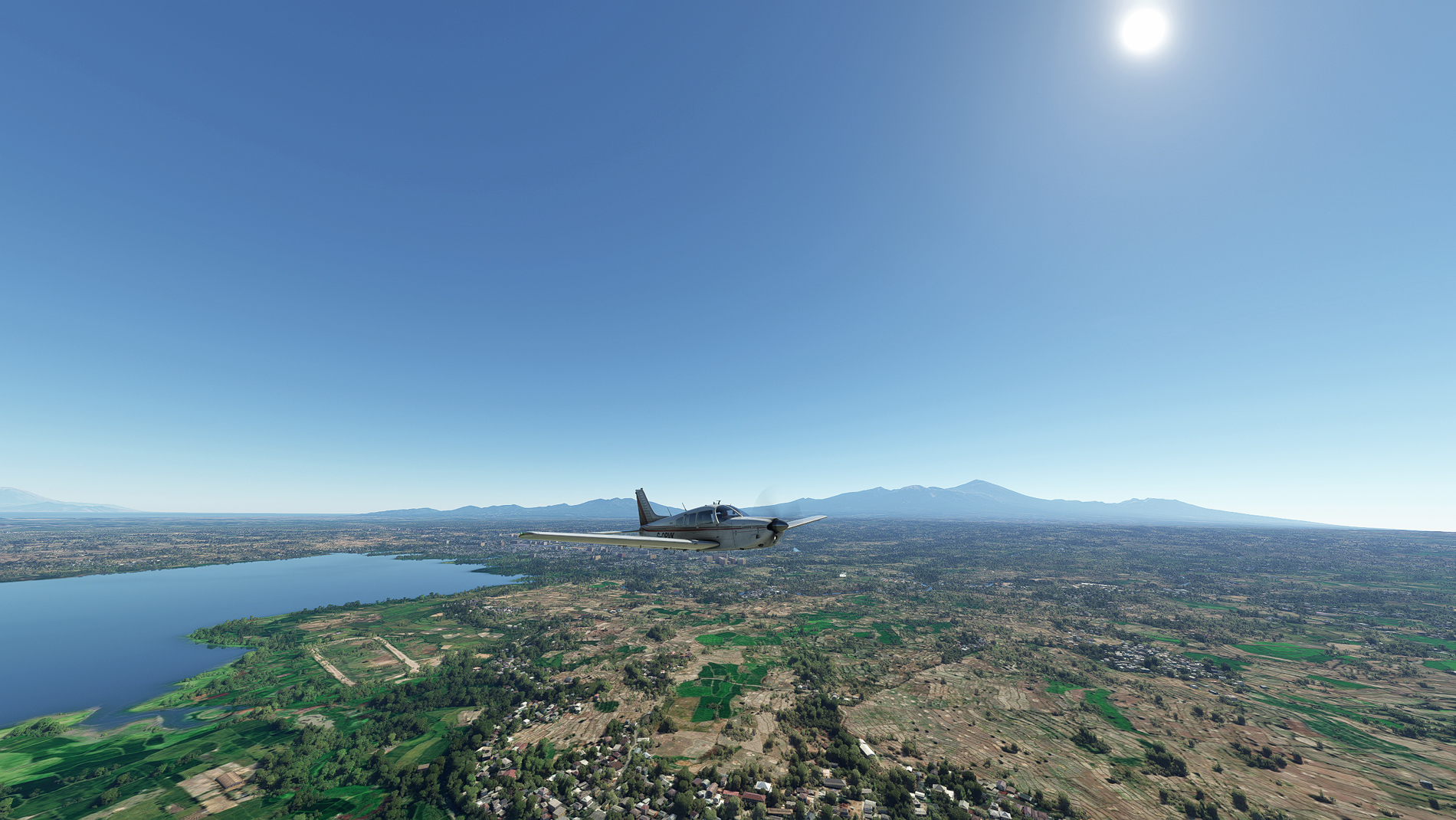 Heading 102 over the narrow straits, I soon reached the coast of Pulau Sumbawa which, with Lombok, forms the Indonesian province of West Nusa Tenggara: 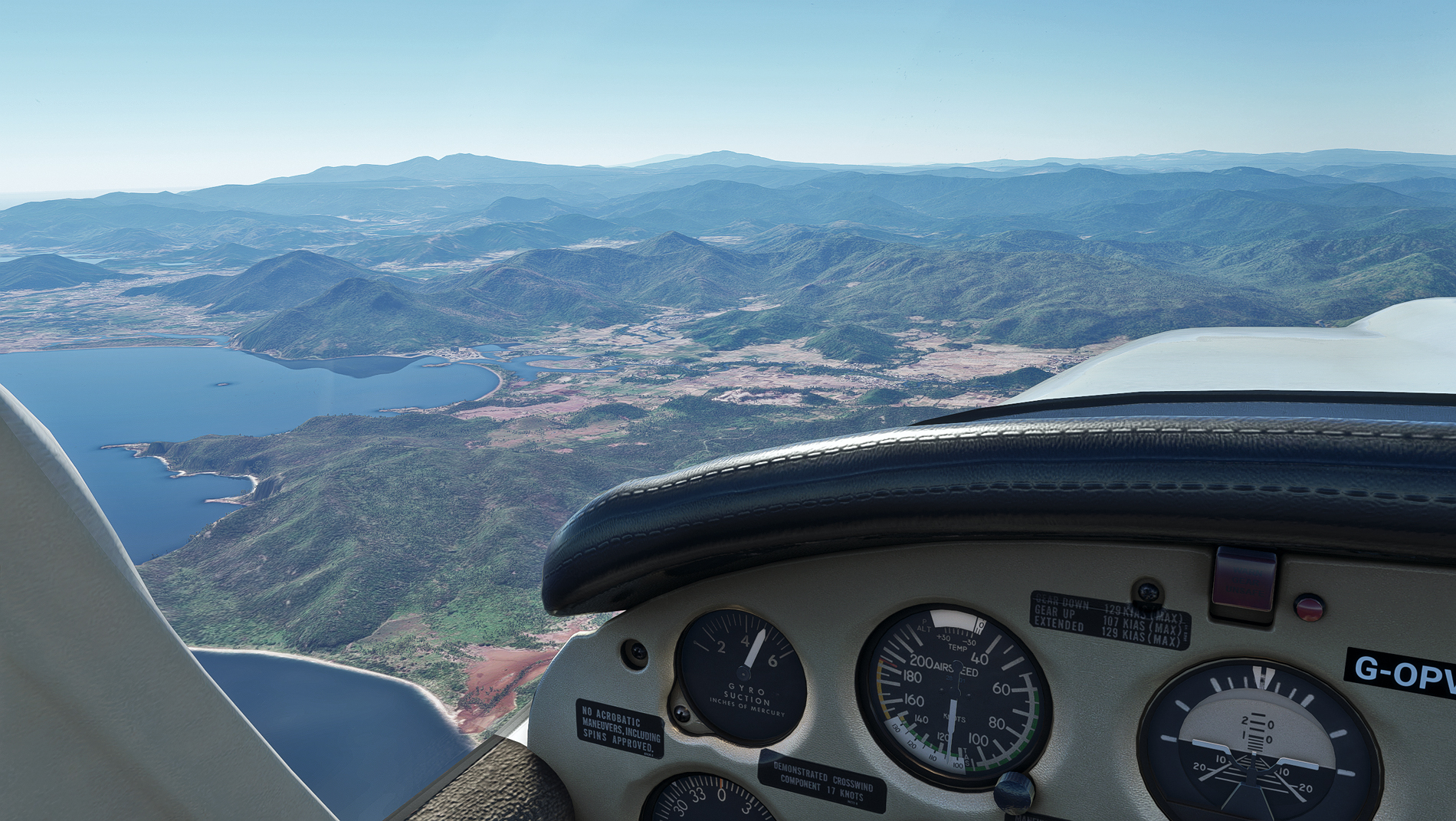 After Pulau Sumbawa, still on a heading of 102, the island of Sumba came into view. By this time, the sim was starting to stutter again. I did think about abandoning this flight, but I'd come too far: 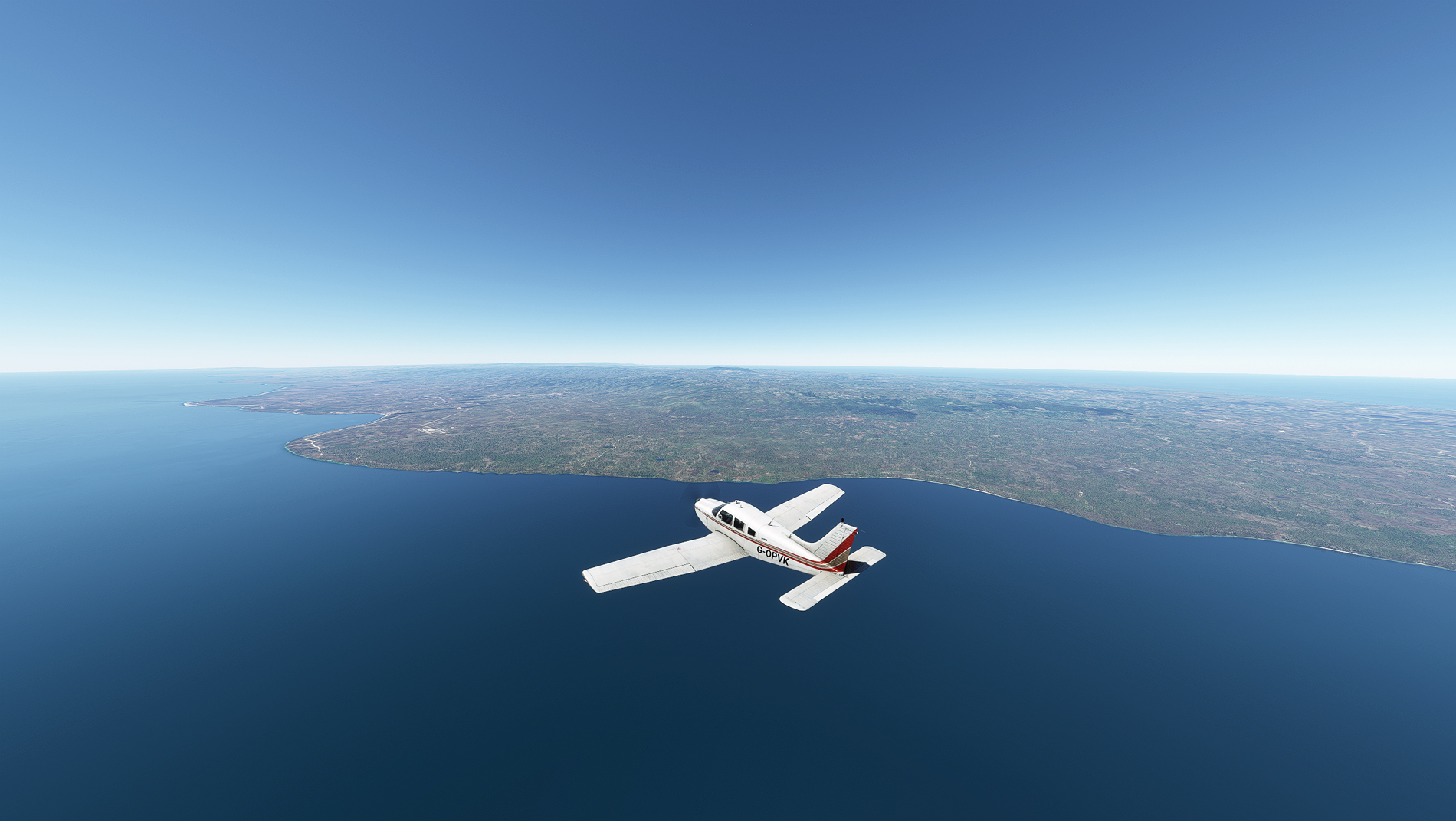 Across the Suva Sea, a passage of 200 nm over water. Being relatively featureless, the stuttering wasn't so noticeable: Off on the horizon is the distant island of Flores, the Portuguese word for 'Flowers', and where the Komodo dragon can be found: 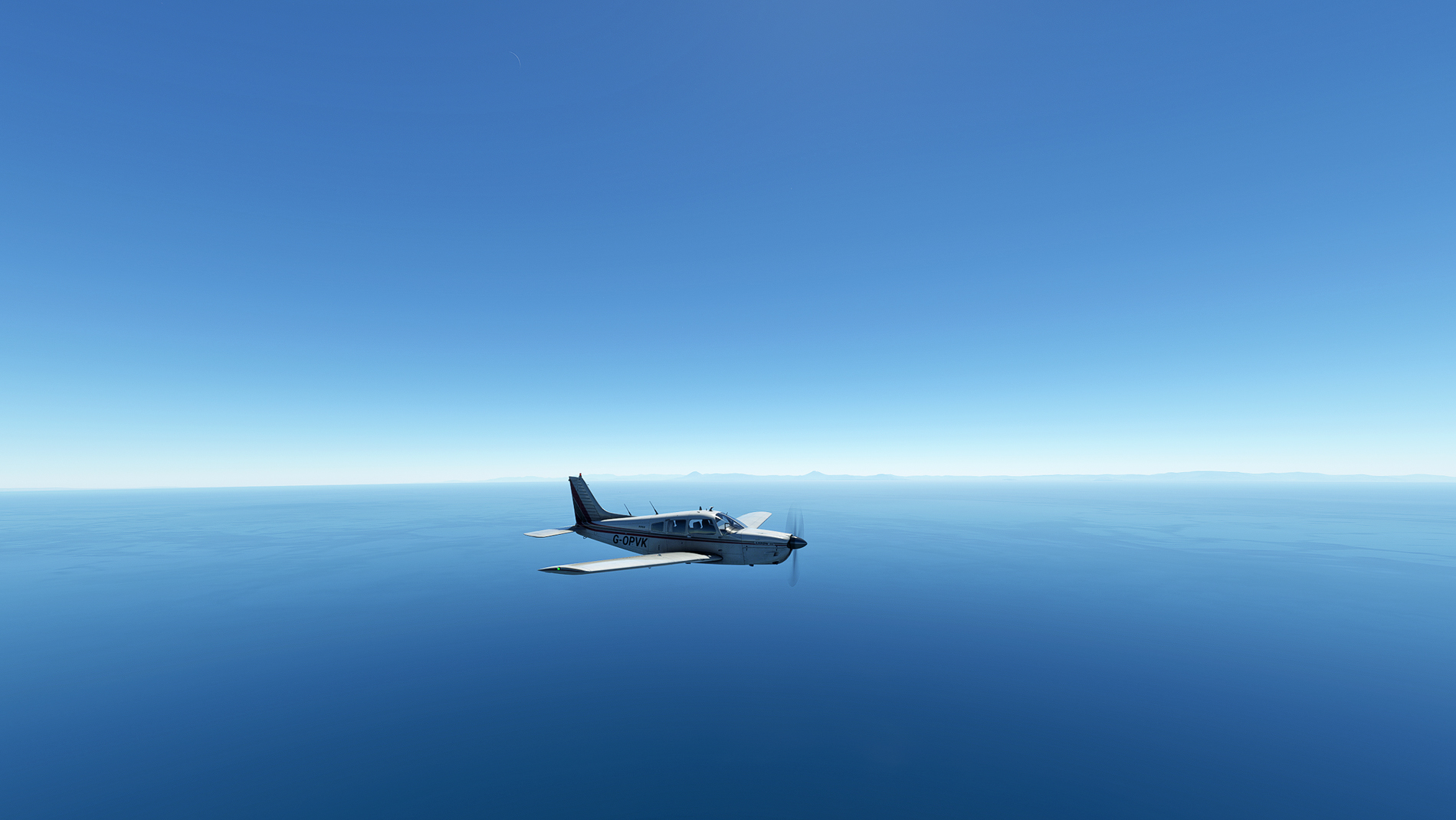 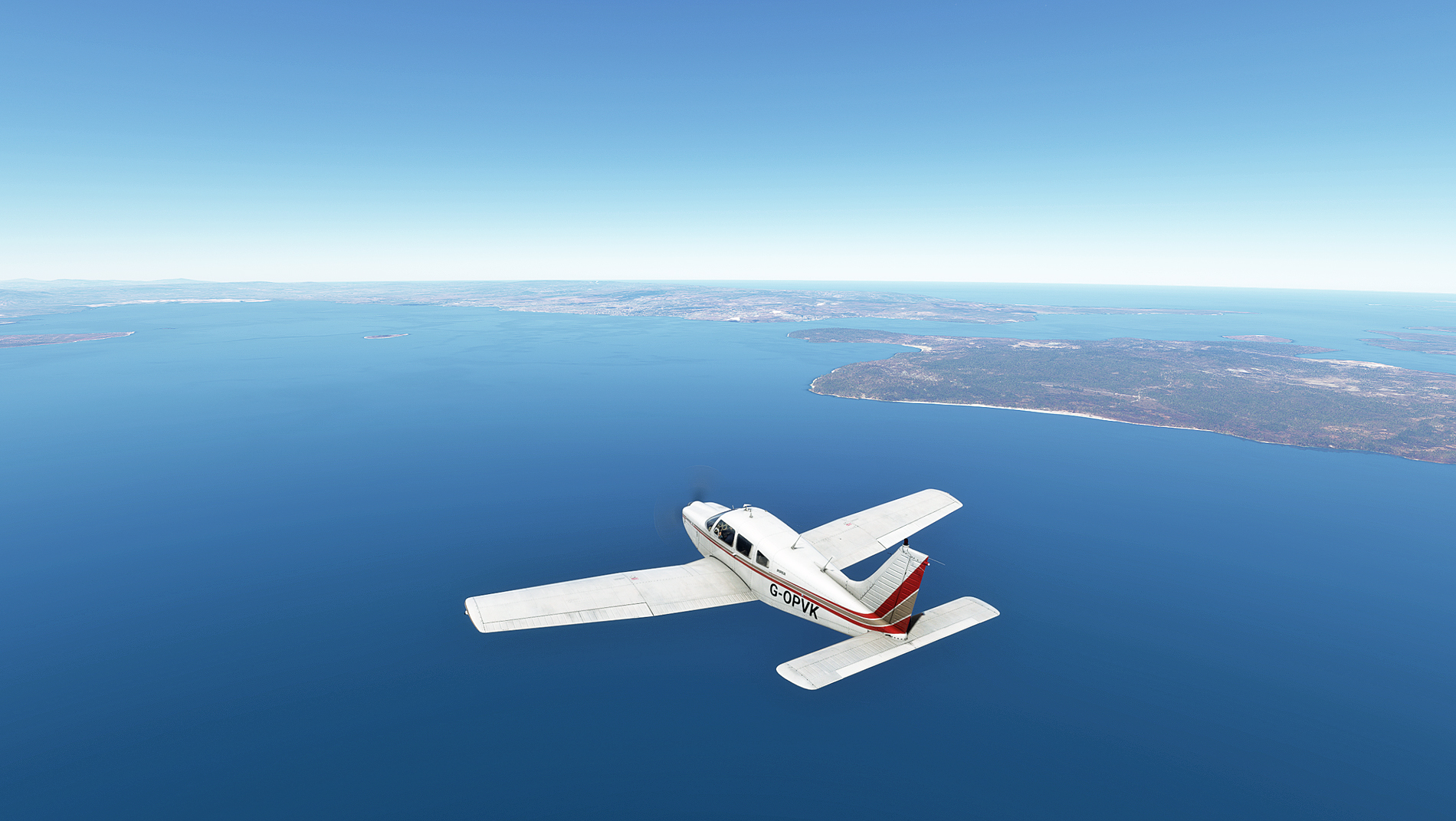 By now the stuttering was pretty bad, plus I had the usual turbulence to contend with. Fortunately, Kupang's El Tari airport has an ILS on RW 25, so I let the autopilot hold the localizer, leaving me free to concentrate on height and speed. 'George' held on by his fingernails at times, but we got in, and quite smoothly in the end: 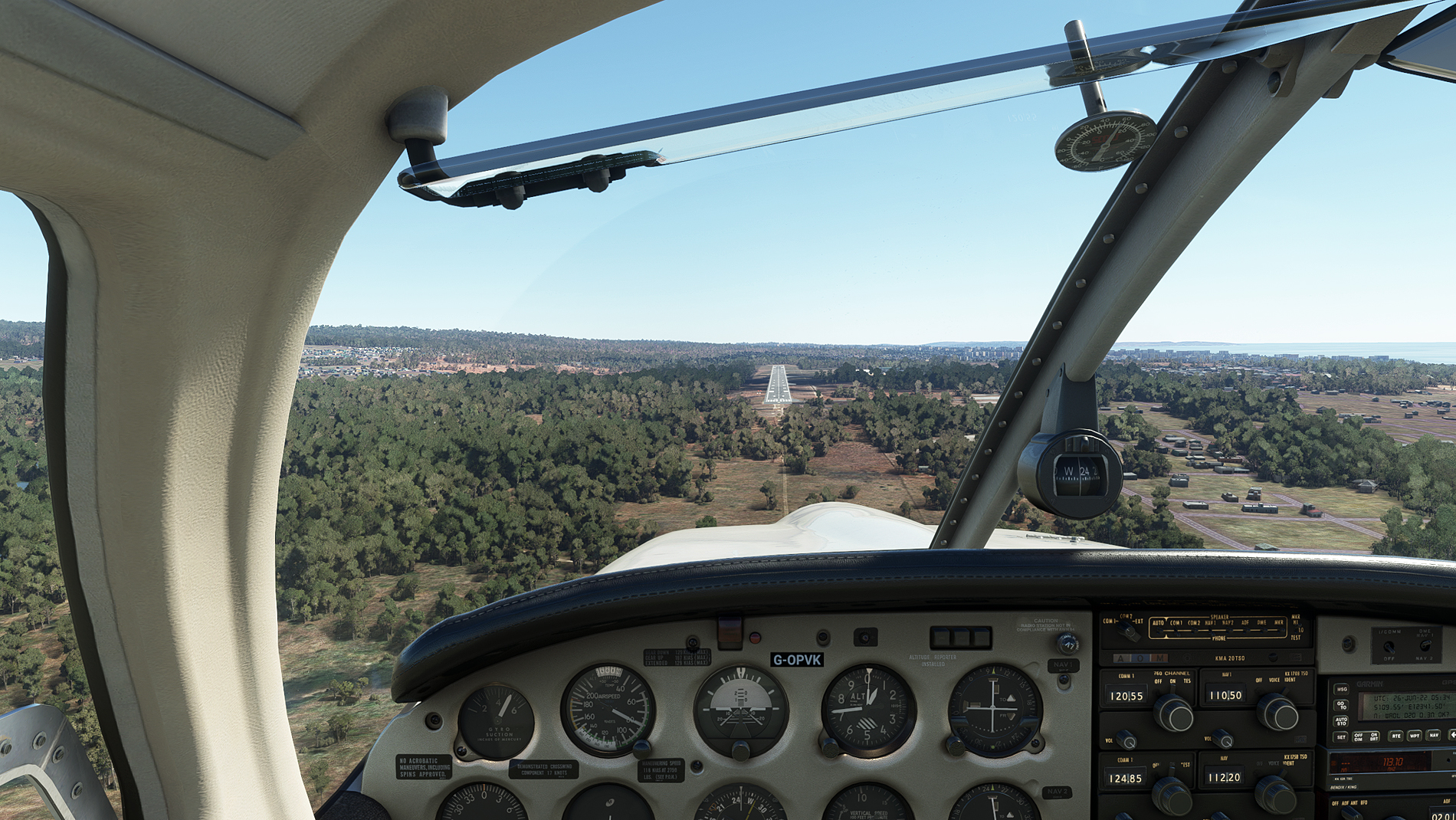 Parked at Koepang, the springboard for Australia! 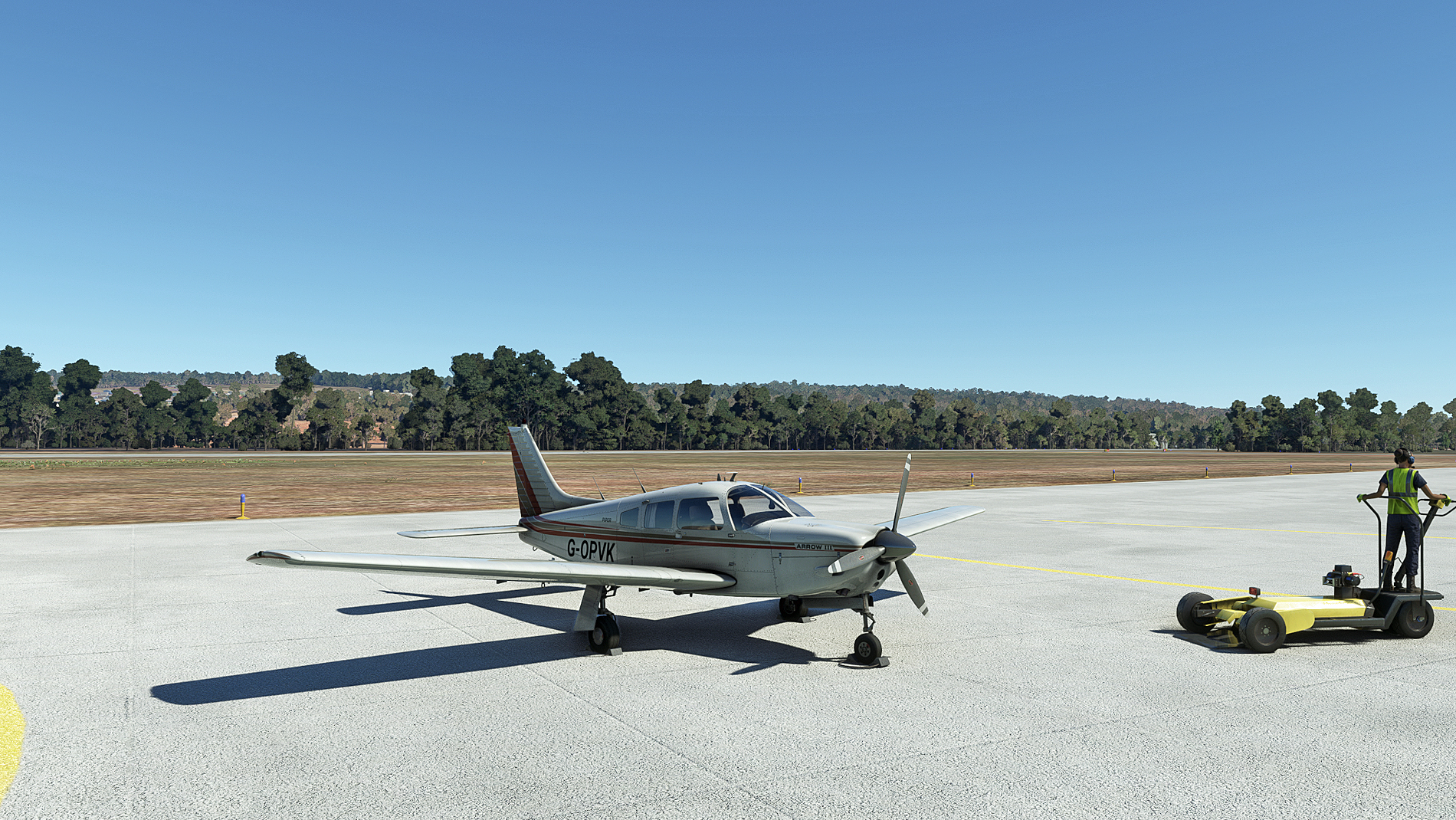 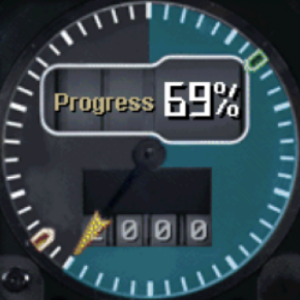 I'm loving how you showcase some of the various scenic landmarks there; the Seine one got me real good!

Keep up the great work, and by all means, please... stay out of the trees!

*phew* That was a nail-biter. Glad you made it safely to Koepang, Paul, without MSFS giving up the ghost.

Keep up the great work, and by all means, please... stay out of the trees!

Thank you very much. Funny you should mention the trees - I've just installed a mod that reduces them to a more realistic height, so I should be able to avoid getting caught up in them.

Yes, that approach was horrible - but for the ILS, I would probably have had to abandon it and re-fly the Koepang leg again later. These stutters are a bugger, but testing and tweaking continues - this afternoon, the sim has been running a test flight on autopilot for the last three hours, and not a single stutter. Of course, tomorrow could be another story. 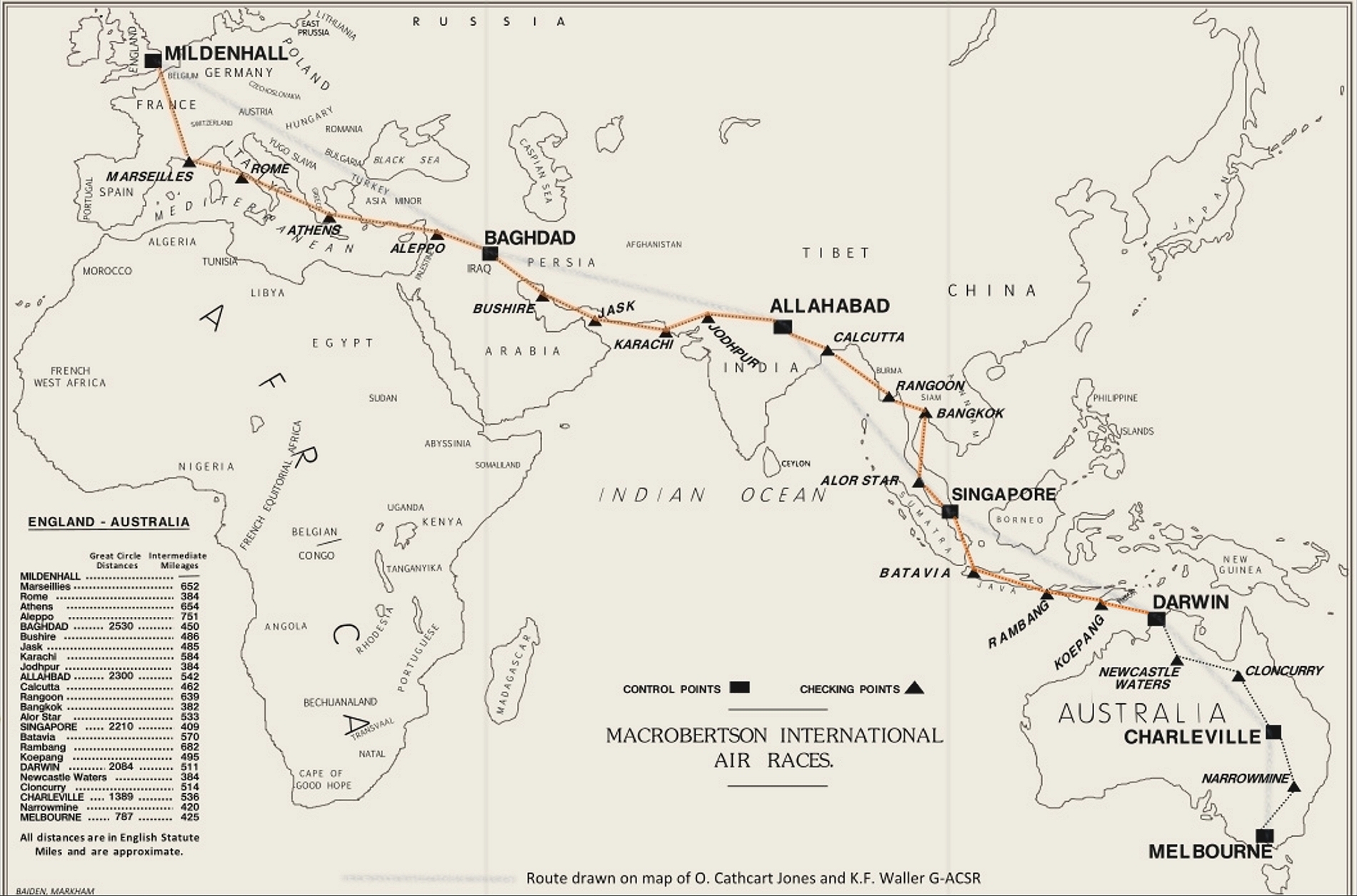 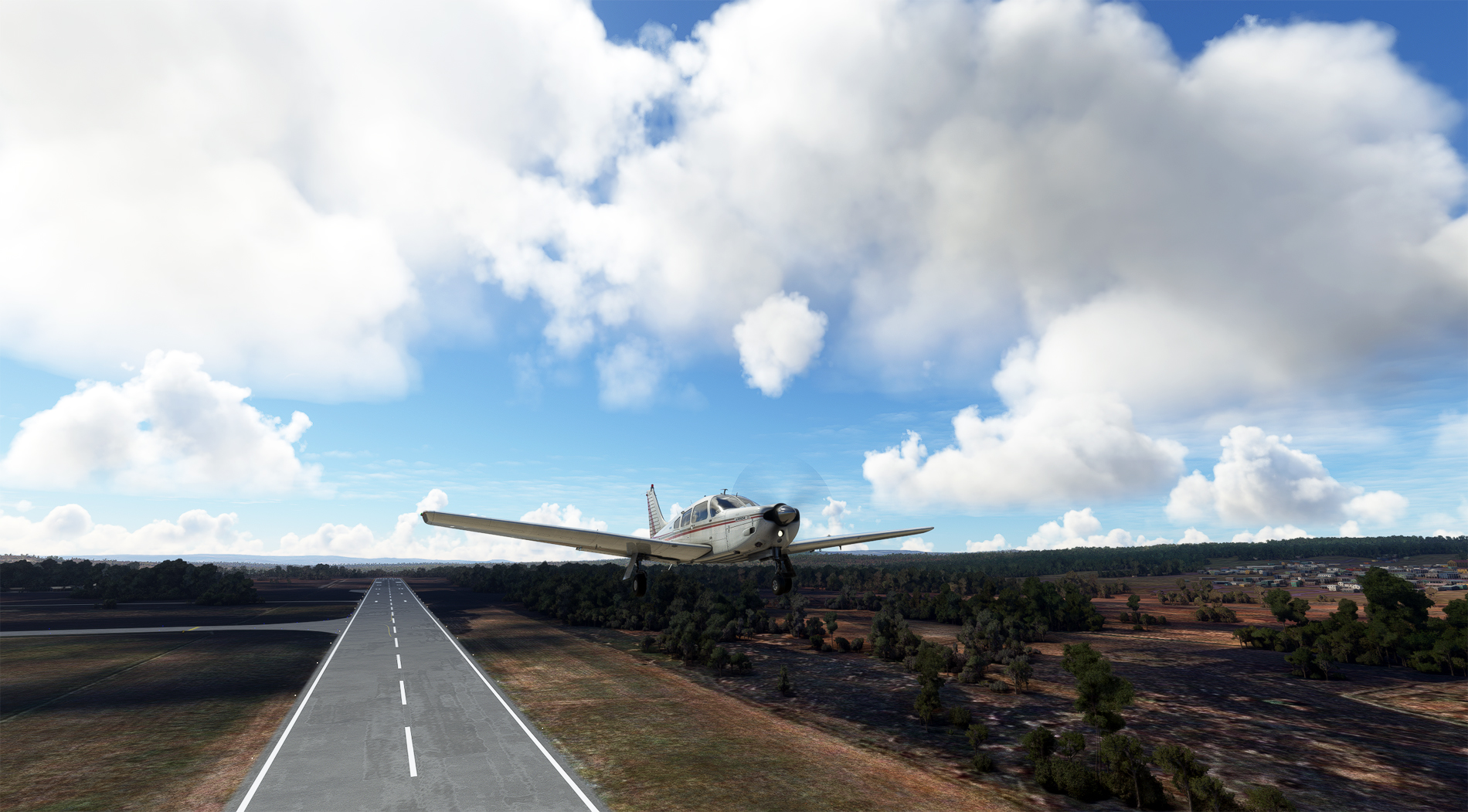 With 440 nautical miles across empty sea ahead of me, I turned back to get a good outbound course from the short-range terminal VOR (KPG): 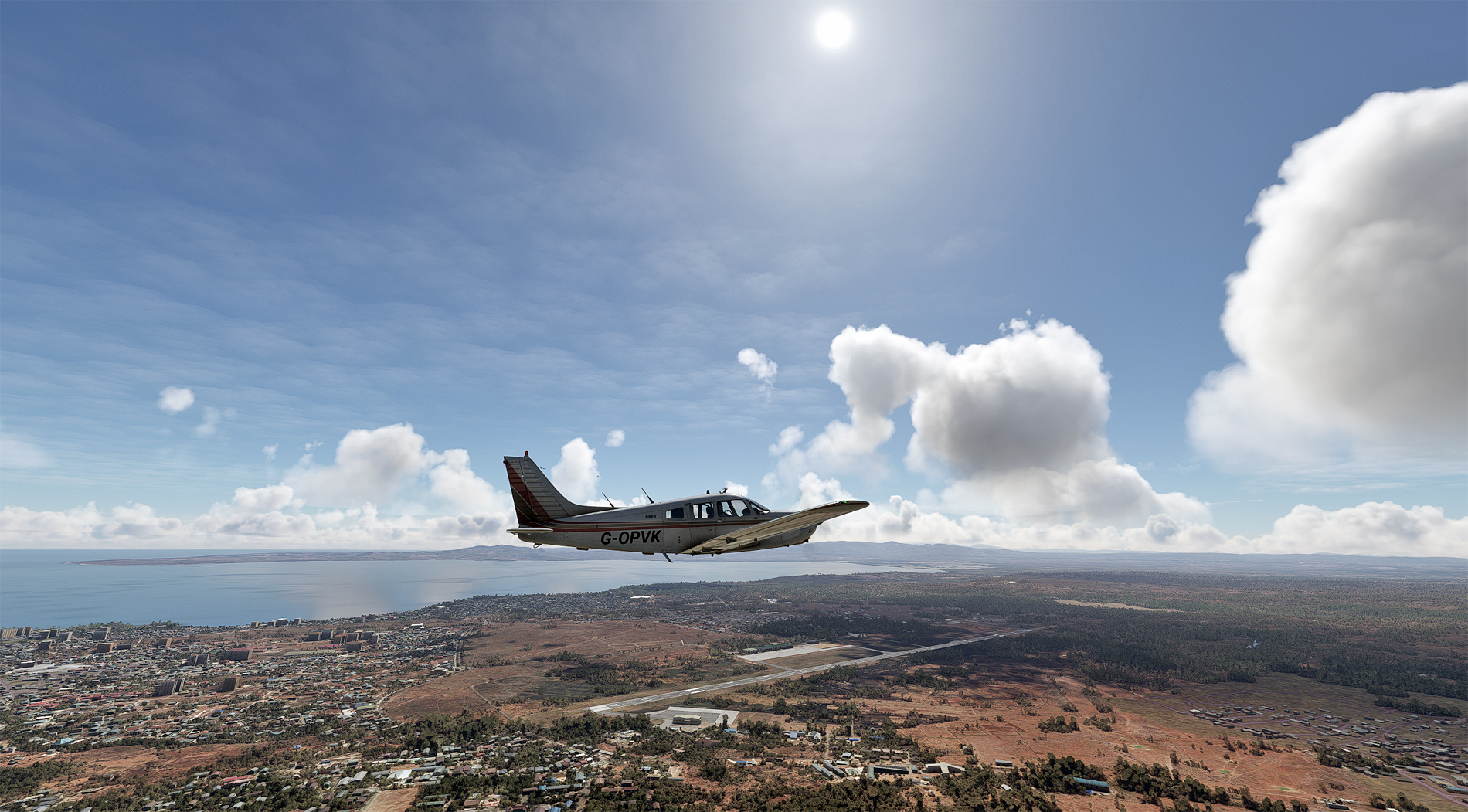 Leaving West Timor, and the 25,000 islands of the vast Malay Archipelago behind: 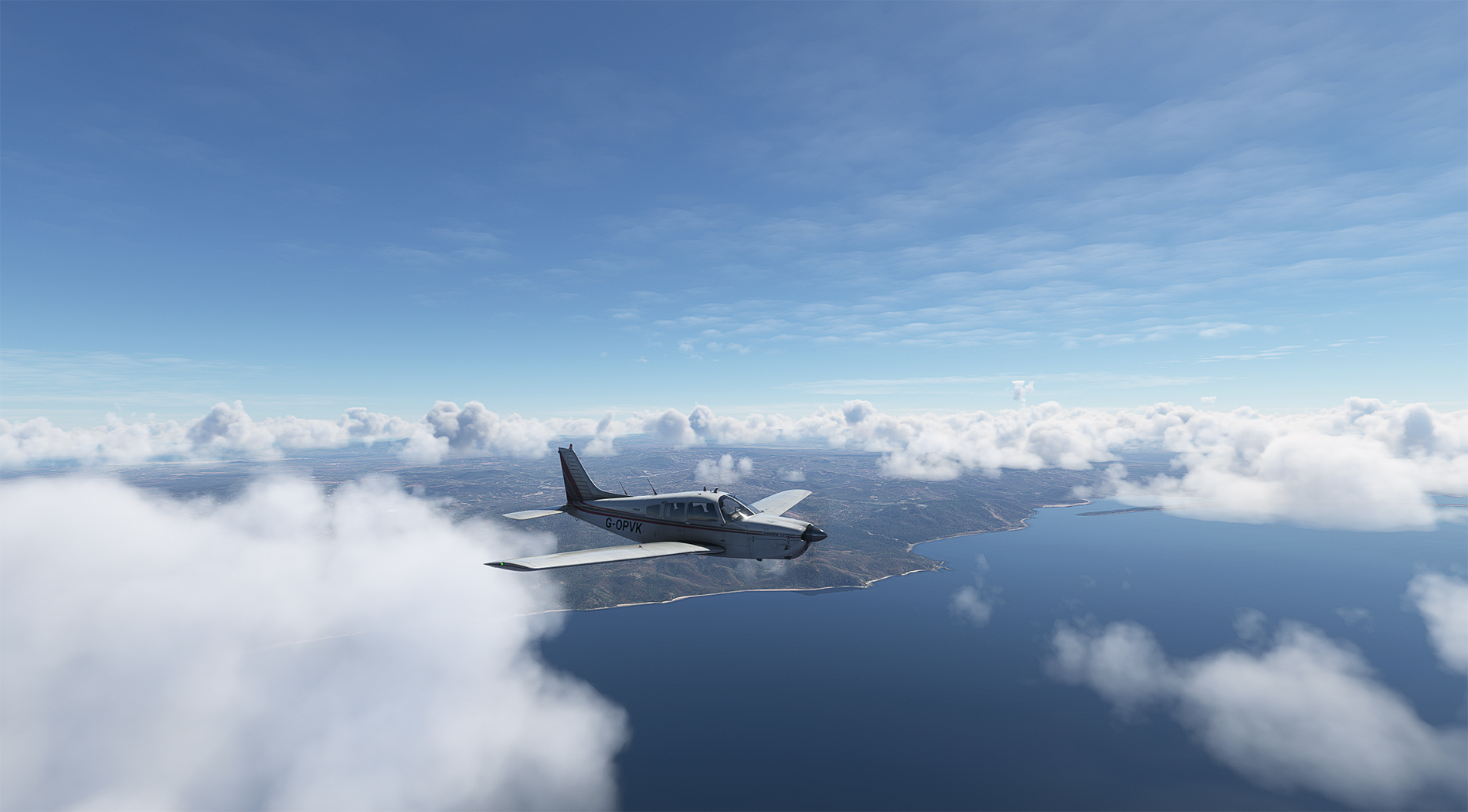 The Kupang VOR signal soon faded, and I was on the heading bug alone. Listening out for the VOR at Darwin, there wasn't much to do but watch the clouds go by. Down below was the shark-infested Timor Sea, where ditched aviators are a prized delicacy. 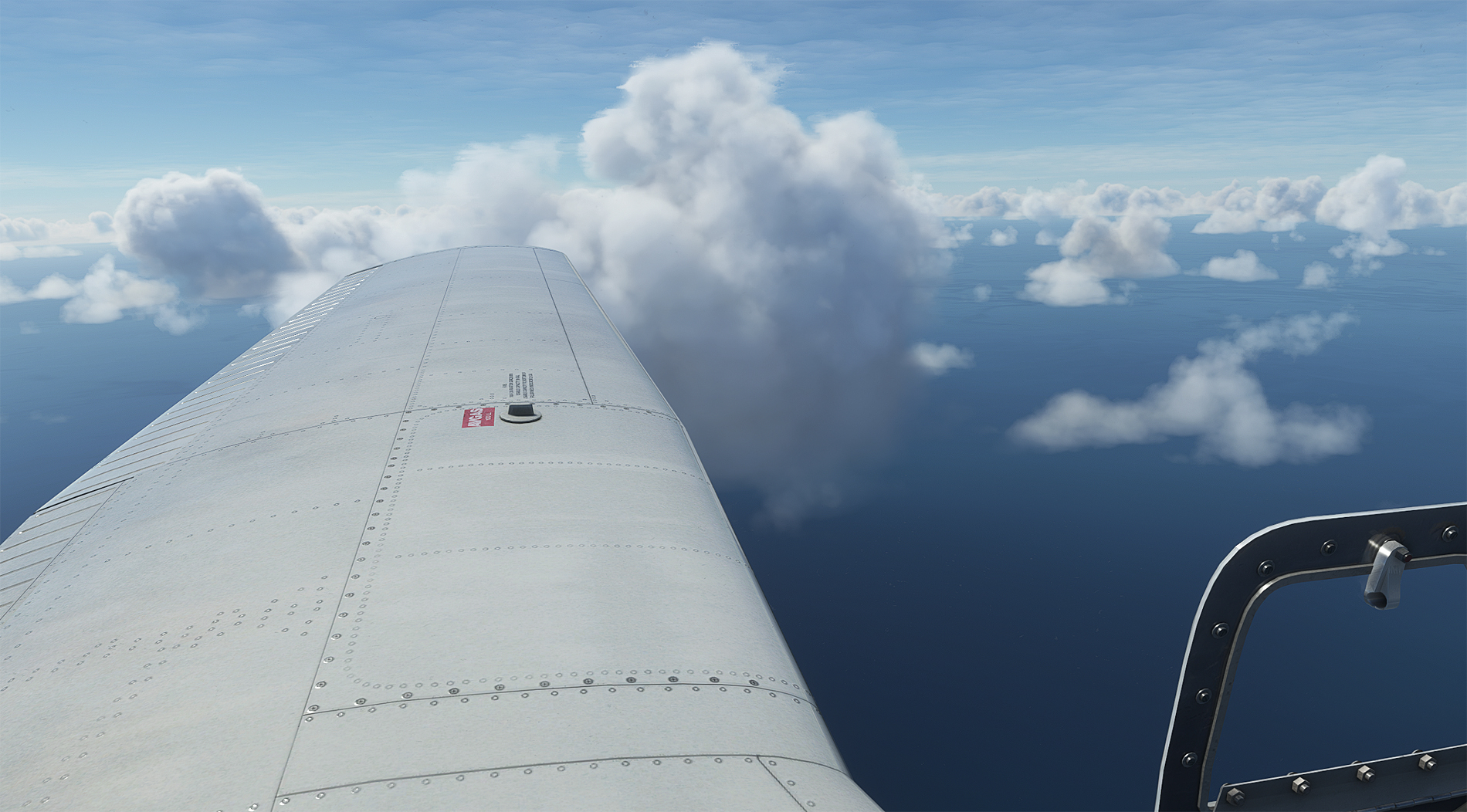 While the miles fell away, I sat and read a very old copy of 'Pacific Flight' by P.G. Taylor. He was Sir Charles Kingsford Smith's friend, co-pilot and navigator. They planned to compete in the MacRobertson race, but due to technical problems were unable to leave for the UK in time to take part.

At last, the Morse signal from Darwin's long range VOR (DN) was picked up, and the needles aligned. Mind you, it's unlikely I would have flown past Australia without seeing it 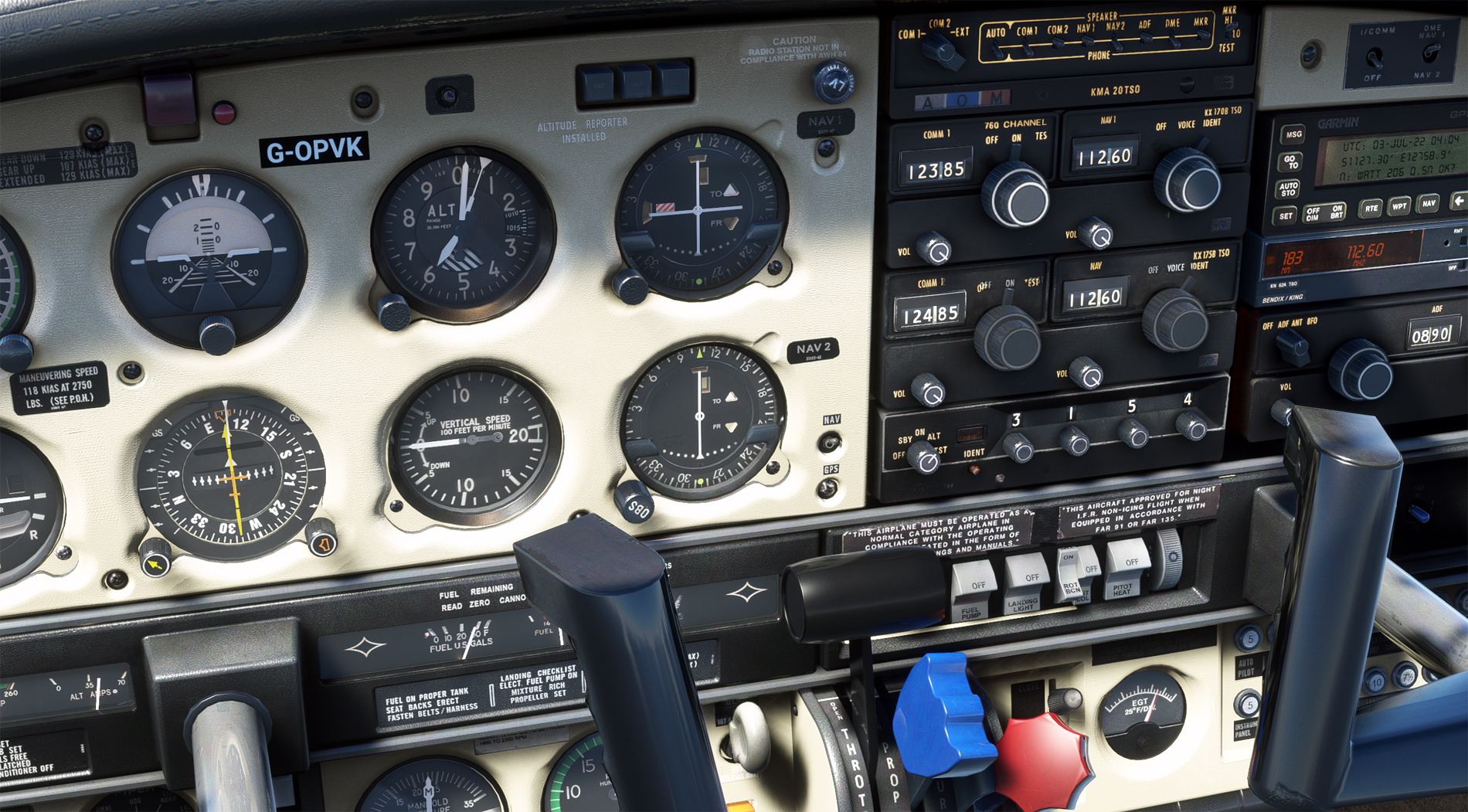 A ship! The first one I've seen since leaving Singapore. Beyond it, off in the distance, is my first glimpse of Australia - Bathurst Island: 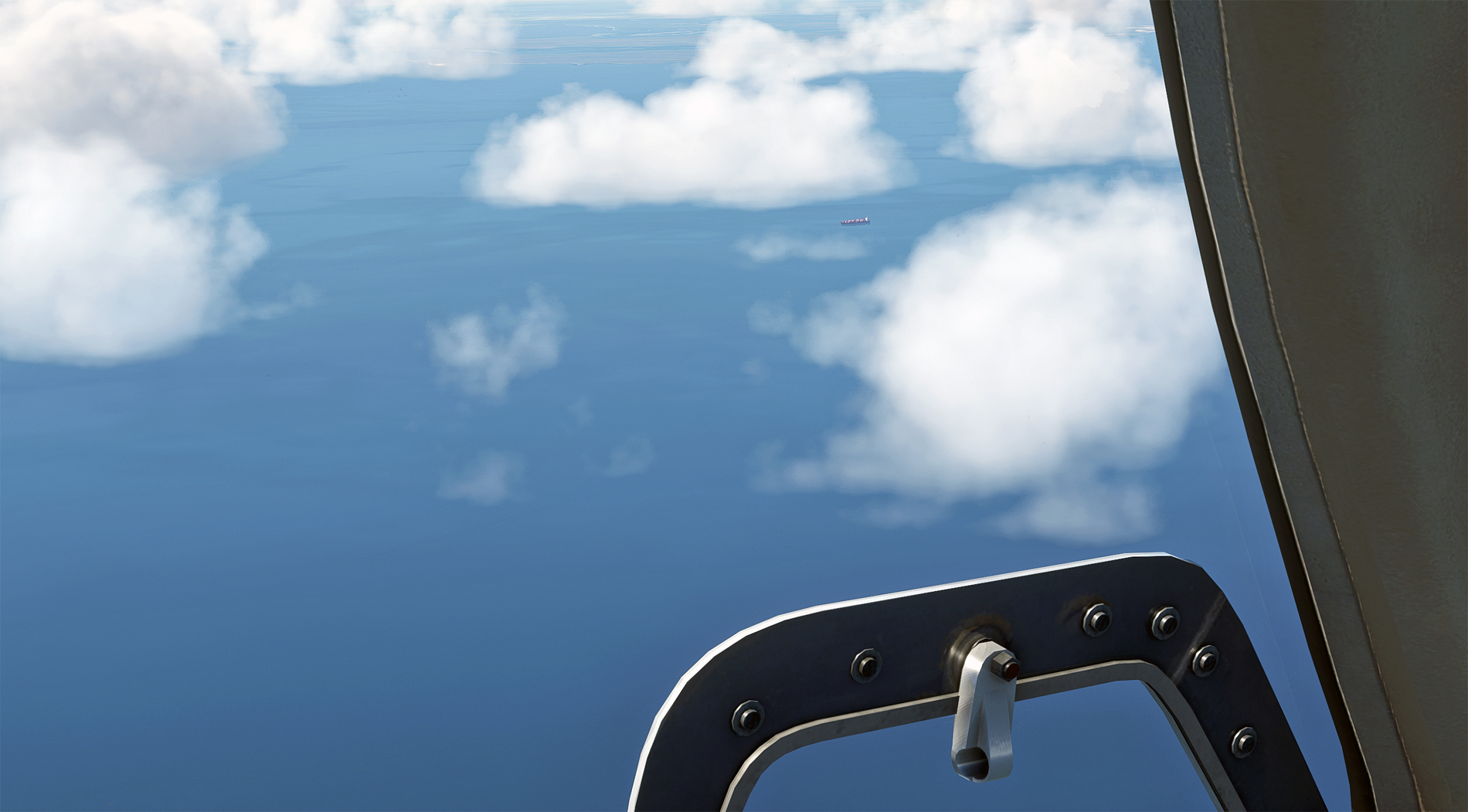 Over Beagle Gulf, named after HMS Beagle. Darwin is named after Charles Darwin, who famously sailed aboard the Beagle, but he never saw this place. Both gulf and port were named on a later expedition by the Beagle's captain: 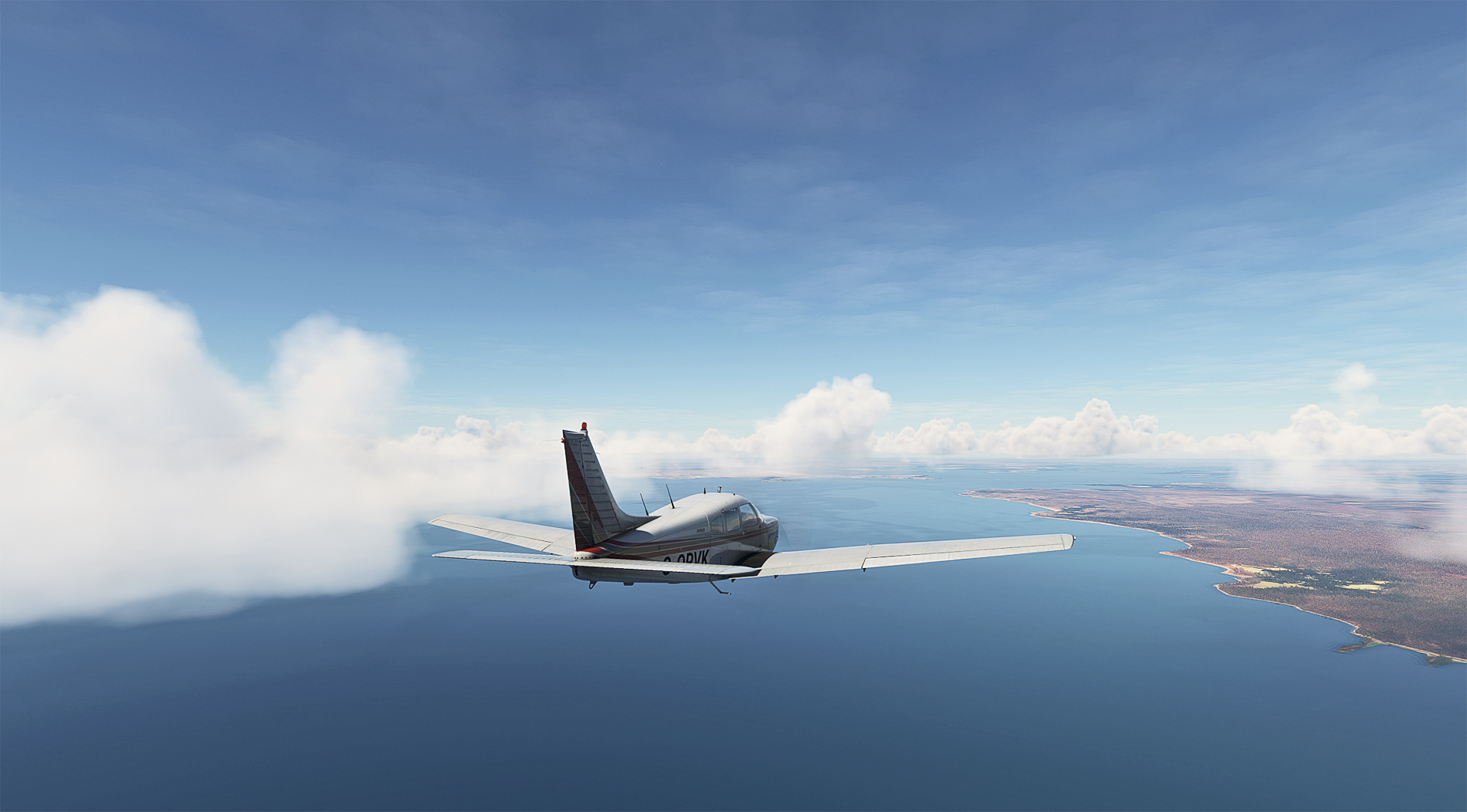 Darwin, where I first set foot on Australian soil as a boy. I arrived by BOAC Boeing 707 back then: 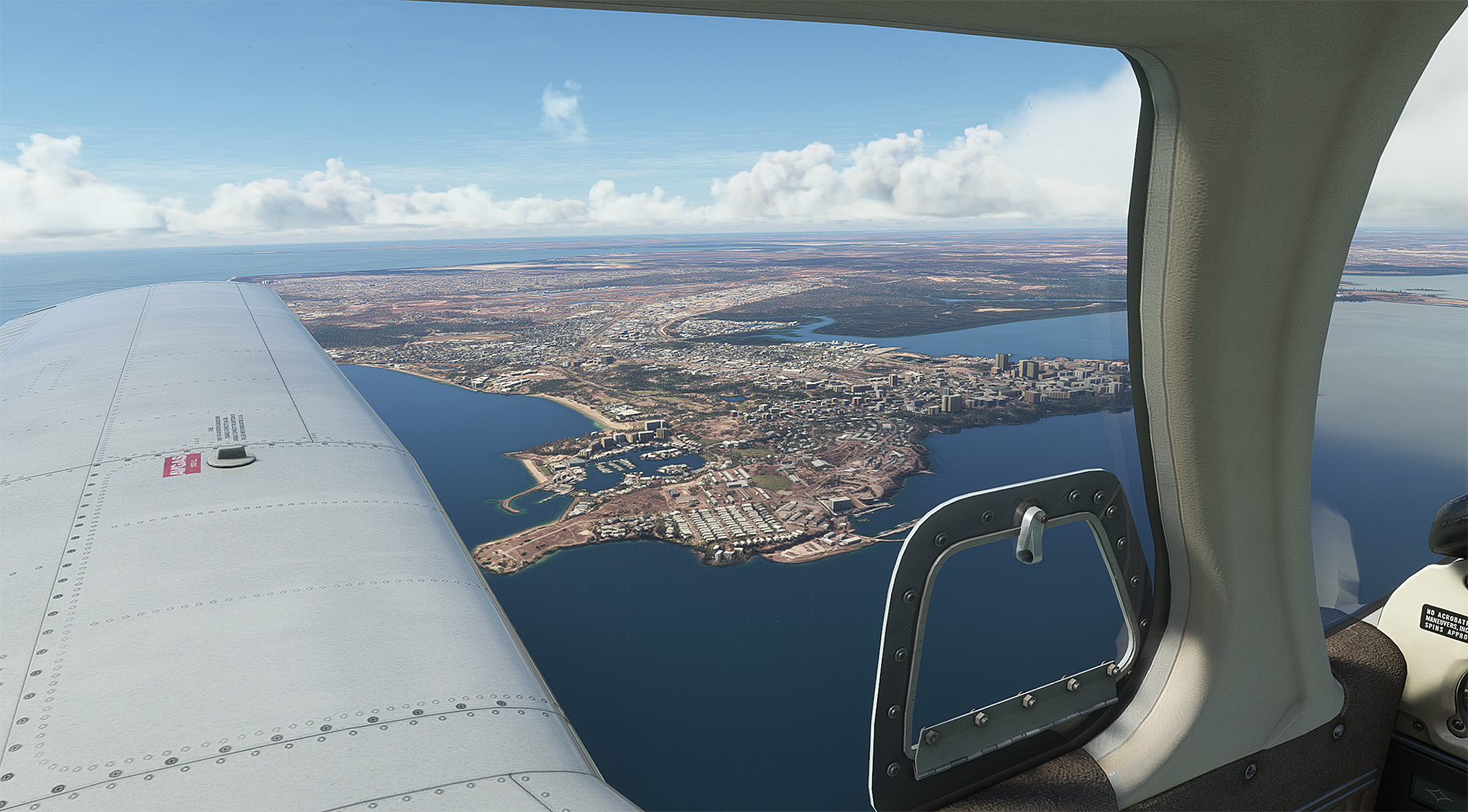 The southern suburbs of Darwin. The entire city was destroyed by a cyclone on Christmas Day 1974, with the loss of 71 lives. 36,000 people were evacuated, in the biggest airlift in Australia's history, and the town rebuilt almost from scratch. 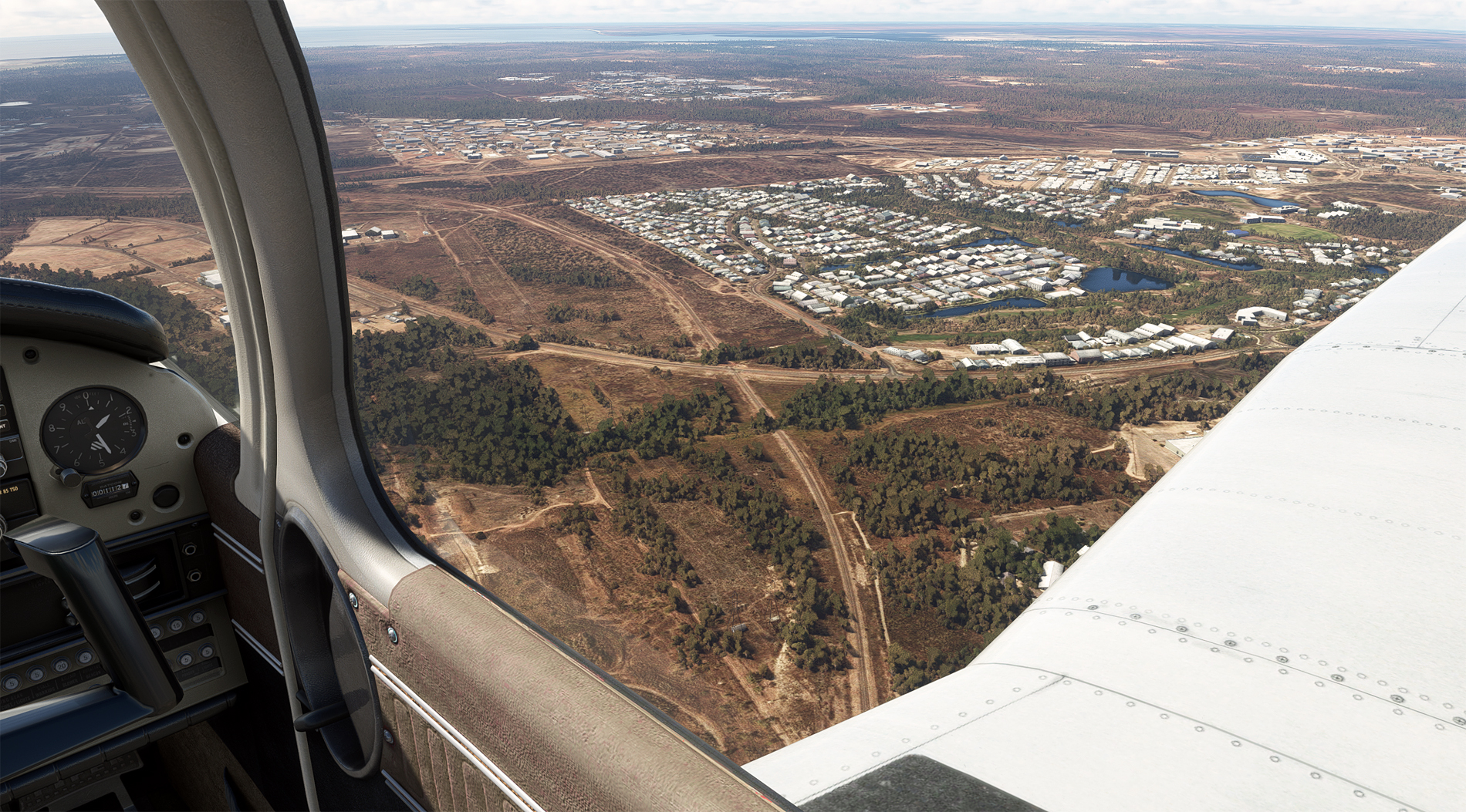 On finals into Darwin airport - slightly off the centre-line and a little too high, as usual. 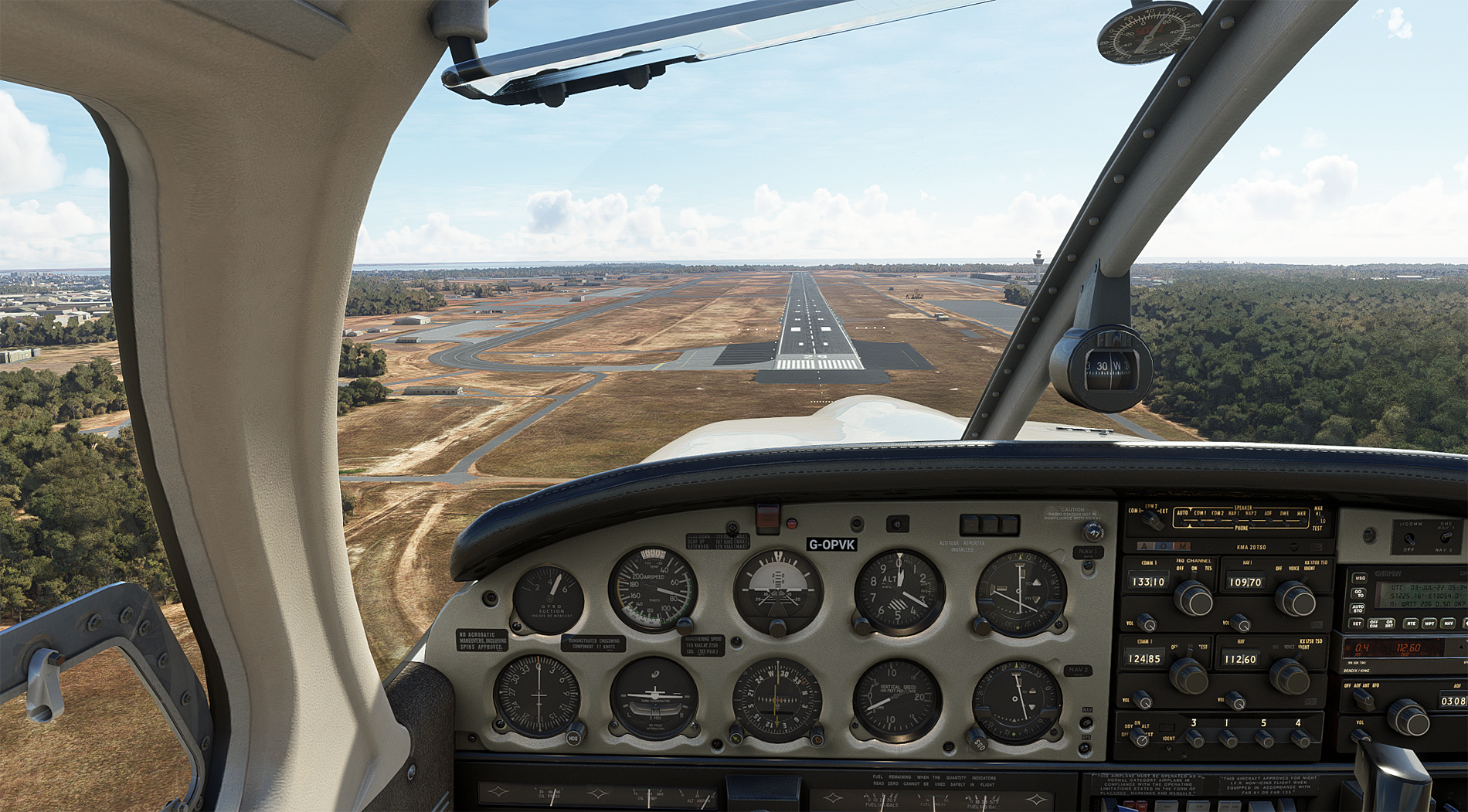 Parked at Darwin - off into town for a few tinnies 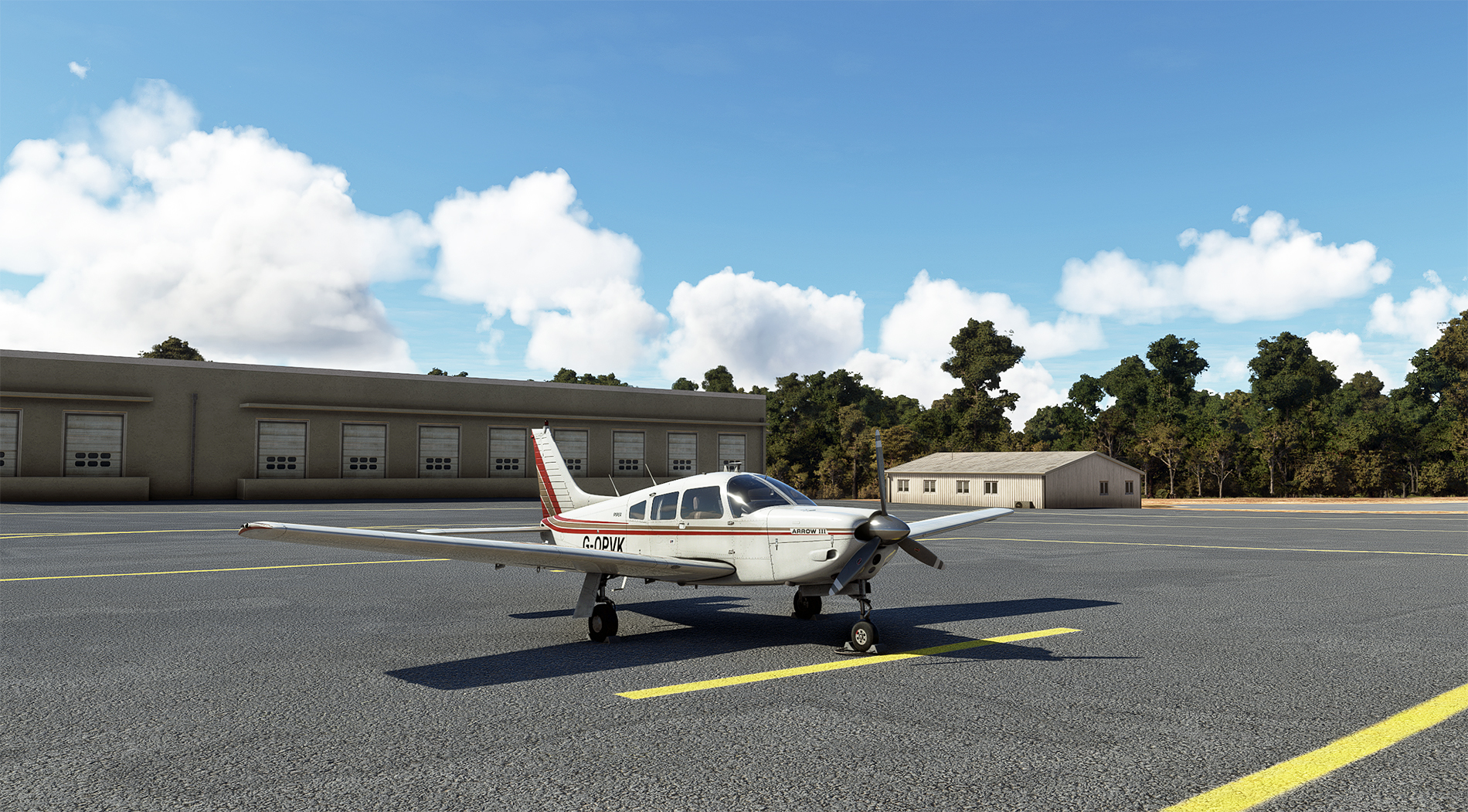 No stutters - not a one! Everything ran smooth as a baby's bottom