dfarrow wrote: ↑
11 Jul 2022, 11:12
Paul , Is the Tindal VOR a TACAN ? A TACAN is for Mil a/c. only , and is same frequency spectrum as VORs/ILSs.
One like Yeovilton VLN 111.0 ...is not received by real Civi a/c VORs . However the DME part of it sometimes is . But Flt Sim doesn't seem to know it's a TACAN and it operates as a VOR.
In the real a/c it's easier and more reliable to use the DME associated with Yeoviltons ILS 111.3 I-YEO .
Additionally some VORs and DMEs are not co-located , due to siting difficulties . Traditionally Stornoway's VOR and DME were about 7 nm apart , VOR [ if memory serves ] was on a hill to the East . and DME on the field . Thus the VOR approach was only a cloudbreak , and if using the opposite Rwy to the Localiser , it was an NDB/DME approach .

Thx again for the travelogue

Hi Dave - thanks for that. You've made me think a little, and I reckon the problem lies in the fact that there are two navaid databases - one in Little Nav Map ( LNM), which is AIRAC Cycle 1801, and another, separate one in the sim itself (MSFS), most likely an older AIRAC cycle. So, two different AIRAC cycles, and that means that a navaid that exists in one navaid database might not exist in the other.

When planning a flight in LNM, you get the choice of using either of the two databases (LNMs or MSFS). On a particular leg over India, I had done the flight plan using the LNM database, but during the actual flight a certain NDB wasn't detected by the aircraft's ADF. After the flight, I went back and checked - this particular NDB was there in the LNM database, but not in the MSFS database.

The problem might be that the only way the MSFS aircraft's radios can only read from the LNM database is if the two computer programs are running and connected. I normally run them both, but not connected. Once airborne, LNM acts merely as a paper chart, showing me the flight plan and route, but not showing me the aircraft's position.

However, none of this should be a problem if I do the planning, and do the flying, both on the same database (since the India NDB mystery mentioned above, I now stick to planning using MSFS's own database - not LNM's one).

Here's the situation at Tindal:

This first picture shows what I actually had on the flight plan during this leg from Darwin to Newcastle Waters. Note that in the drop-down menu, I have selected "Do not use Navigraph database". This means I am, by default, using the MSFS database. The VOR and DME are separate, but the same frequency ( 112.3 ). On the face of it, both should have worked, but I was only picking up the VOR. 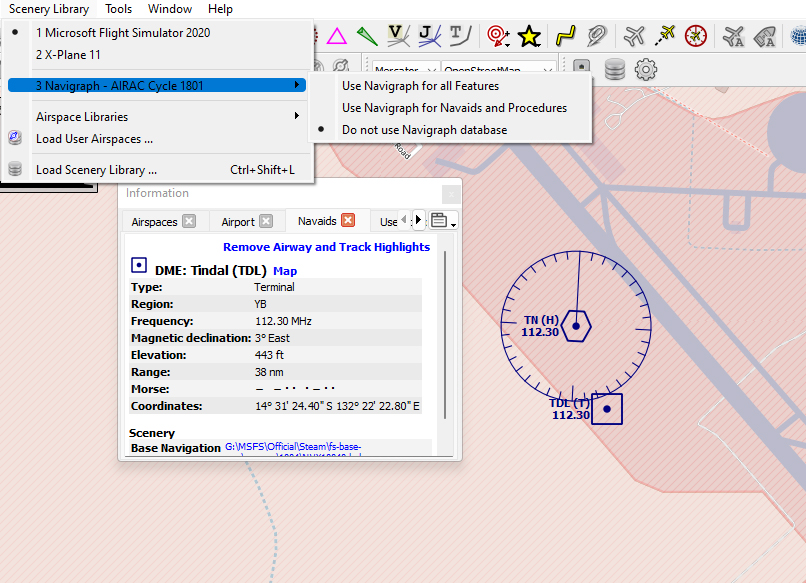 This second picture shows what turns up if I select "Use Navigraph for Navaids and Procedures" i.e. LNM's own database. The VOR is still there, but the DME has changed to a TACAN - still with the same frequency, 112.3: 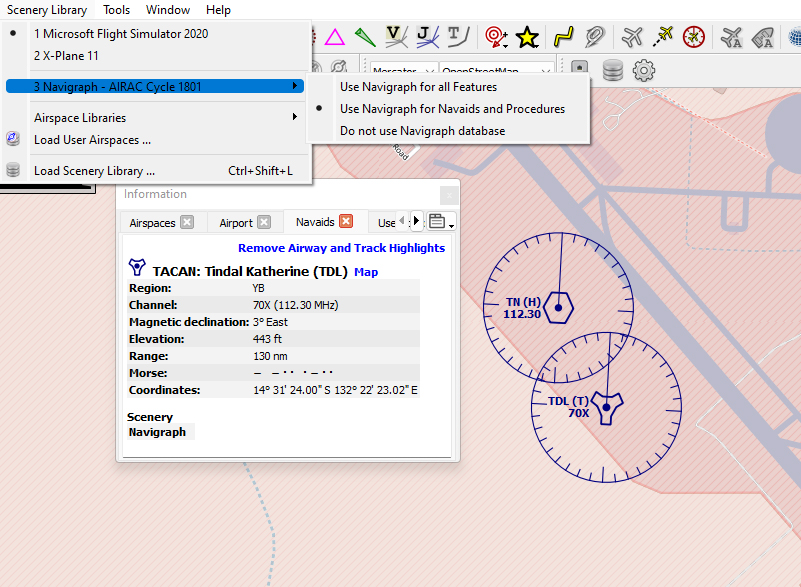 So, the DME exists in the MSFS database I am using, but it's a TACAN in the LNM database, which I am not using.

I daresay I'm missing something vital and simple - a setting in LNM maybe.

You're going to have to explain that one to me, too. Parrotheads ? Jimmy B ??

By the way, Ben, this means that since the Hunter is TACAN-capable, you might not have the DME problem I had. Can you let us know whether everything was okay, and which navaid database the sim was using ? Ta.
https://rationalwiki.org

Brian , being a colonial ; well knows of Jimmy Buffet . He's not so well known in UK [ bit less than the Singing Postman ] . Over here , think only well known tune is ' Come Monday ' .
Singer song writer from the Gulf Coast , forebears Blue water sailors . Aviator , well known for his Grumman Albatross ' Hemisphere Dancer ? ' Now up to Dassault Tri jet 50/900 etc. Writer / story teller , 'A Pirate looks at 50 ' If you youtube , they'll be a lot of his songs .
I've sailed some of his waters , with sunset , music and a rum to hand [ Pussers out of choice ].
In US southern state airports , going through customs would often see US carrier crews with Parrothead stickers on their bags .
Parrotheads , being JB fans .

Never let it be said that CBFS isn't an education.

It does show Tacan at Tindal Airport on the latest charts Paul
AFAIK msfs uses Navblue for the Navdata, which is updated pretty well every sim update. Most of us prefer Navigraph, especially if you are subscribed to it

I guess I've been a Parrot Head since Jimmy released his album 'Son of a Son of a Sailor' back in the '70s.

Classic Jimmy being interviewed by his daughter Delaney.

It does show Tacan at Tindal Airport on the latest charts Paul
AFAIK msfs uses Navblue for the Navdata, which is updated pretty well every sim update. Most of us prefer Navigraph, especially if you are subscribed to it

Hi Dale, thanks for that - it's clear there's a conflict in all this. Taking the TACAN at Mildenhall in Suffolk as an example, that will give a civvie aircraft DME data, but not a radial - Dave F pointed this out some months ago.

At Tindal, you get a radial from the VOR there, but you don't get DME from the beacon that is a DME in MSFS and a TACAN in LNM.

Dave F has pointed out that DMEs and VORs are not always co-located, and that is the case at Tindal. However, when that is the case, the DME doesn't work. I've just flown round and round Tindal, and no DME signal at all.

So, just to satisfy my own mind, MSFS always uses its own internal database (the Navblue one you mentioned), whether it is connected to LNM or not. Sounds obvious, but it can lead to flight planning errors in Little Nav Map if you have LNM's database selected rather than MSFS's.


Here's another example of the discrepancies that exist, and it's one that's been there for years, going right back to using Aerosoft's FS Commander with FSX:

This is using LNM's AIRAC cycle: 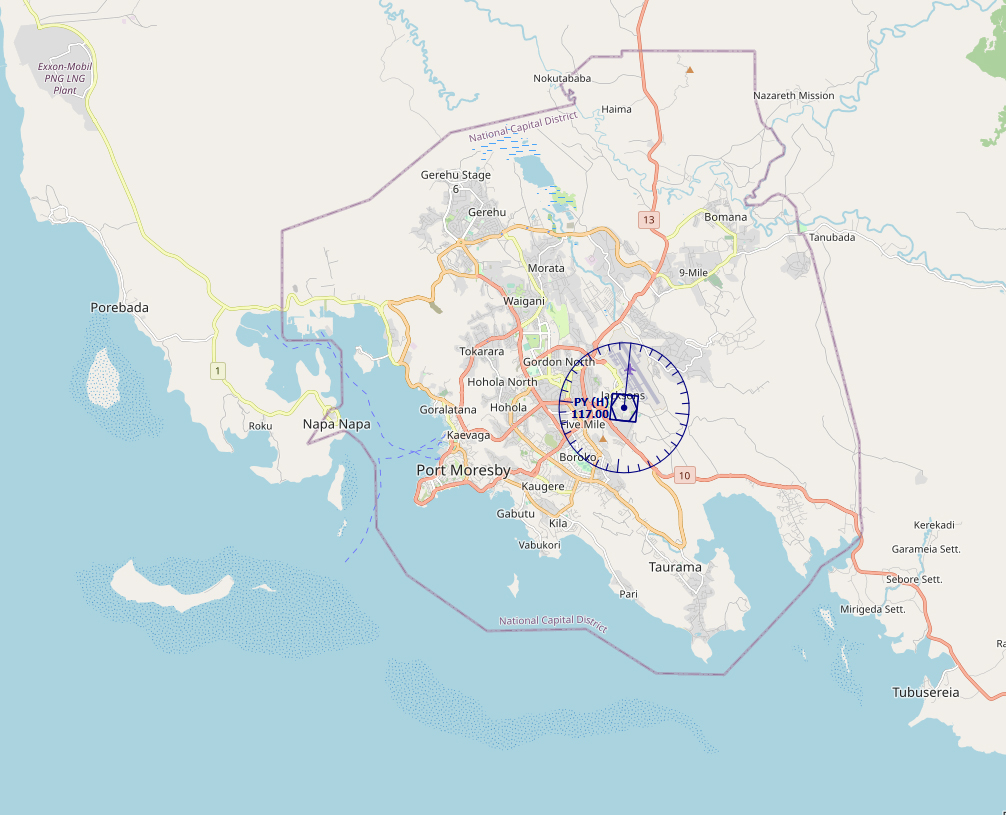 This is using the MSFS (Navblue) database - an extra VOR. Both VORs work: 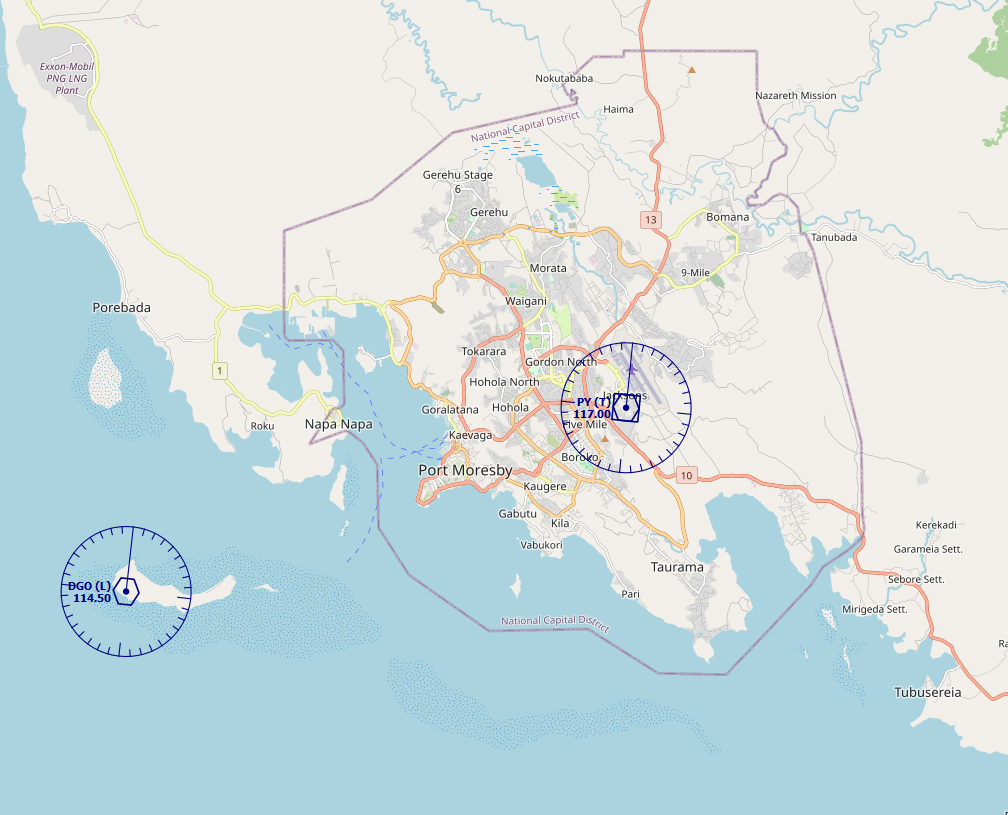 As for Jimmy Buffett, any man who preserves a Grumman Albatross is okay by me.

By the way, Ben, this means that since the Hunter is TACAN-capable, you might not have the DME problem I had. Can you let us know whether everything was okay, and which navaid database the sim was using ?

Hi Paul, only just got round to this leg.

At first Newcastle Waters didn't show up when I imported the flightplan from MSFS to LNM. I had to do a re-import of the MSFS scenery.

Anyway, after sorting that out, I can confirm that the I had no DME on the VOR... and nothing at all on the TACAN. Tuning into 70X on the TACAN got me not a jot. So I suspect something is up.

That is strange, Ben. My only problem at Tindal was with the DME side of things, because the VOR worked fine. No TACAN for you at all - a bit of a puzzle.

My Dad served in the US Navy back in the '50s. He carried a color movie camera with him on his deployments. I distinctly remember watching one of his films which showed a Grumman Albatross pulling along side his ship. I remember him telling me that the Albatross was delivering mail to his ship.