Since getting MSFS just before Christmas, I've been working up to doing a long journey and exploring its wonderful scenery - but where to ? Inspired by Brian (Spot) in his thread viewtopic.php?t=33286 I decided his idea fitted the bill perfectly: the MacRobertson Trophy Air Race route of 1934.

I am following the route taken by O. Cathcart Jones and K.F. Waller in their DH.88 Comet G-ACSR, as this is the best documented, and I'm taking the JF Arrow III (non-turbo), navigating by VORs and NDBs only. The small Garmin 100 GPS unit is turned on, but not displaying any information to assist. The route was planned using Little Nav Map, but not actually loaded into the sim - it sits on my second monitor, simulating a paper chart.

The first leg of the MacRobertson Trophy race taken by G-ASCR was from Mildenhall in Suffolk to Marseilles, as shown: 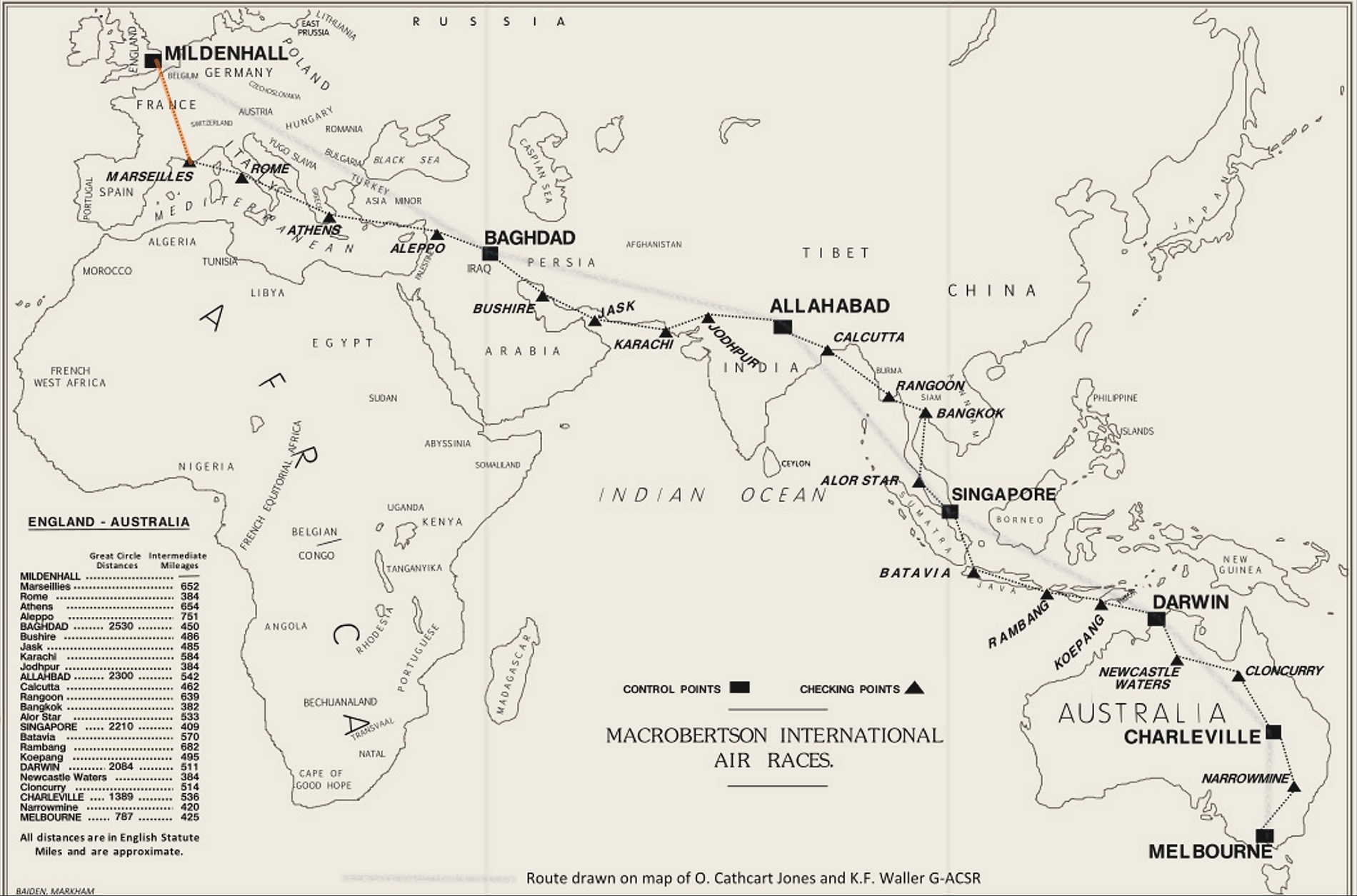 After departing Mildenhall, I got to my intended cruising altitude of 6000 ft. and leaned out to peak EGT. This first flight was going to be a test of how much range I could squeeze out of the Arrow, using the operating data supplied by Just Flight. 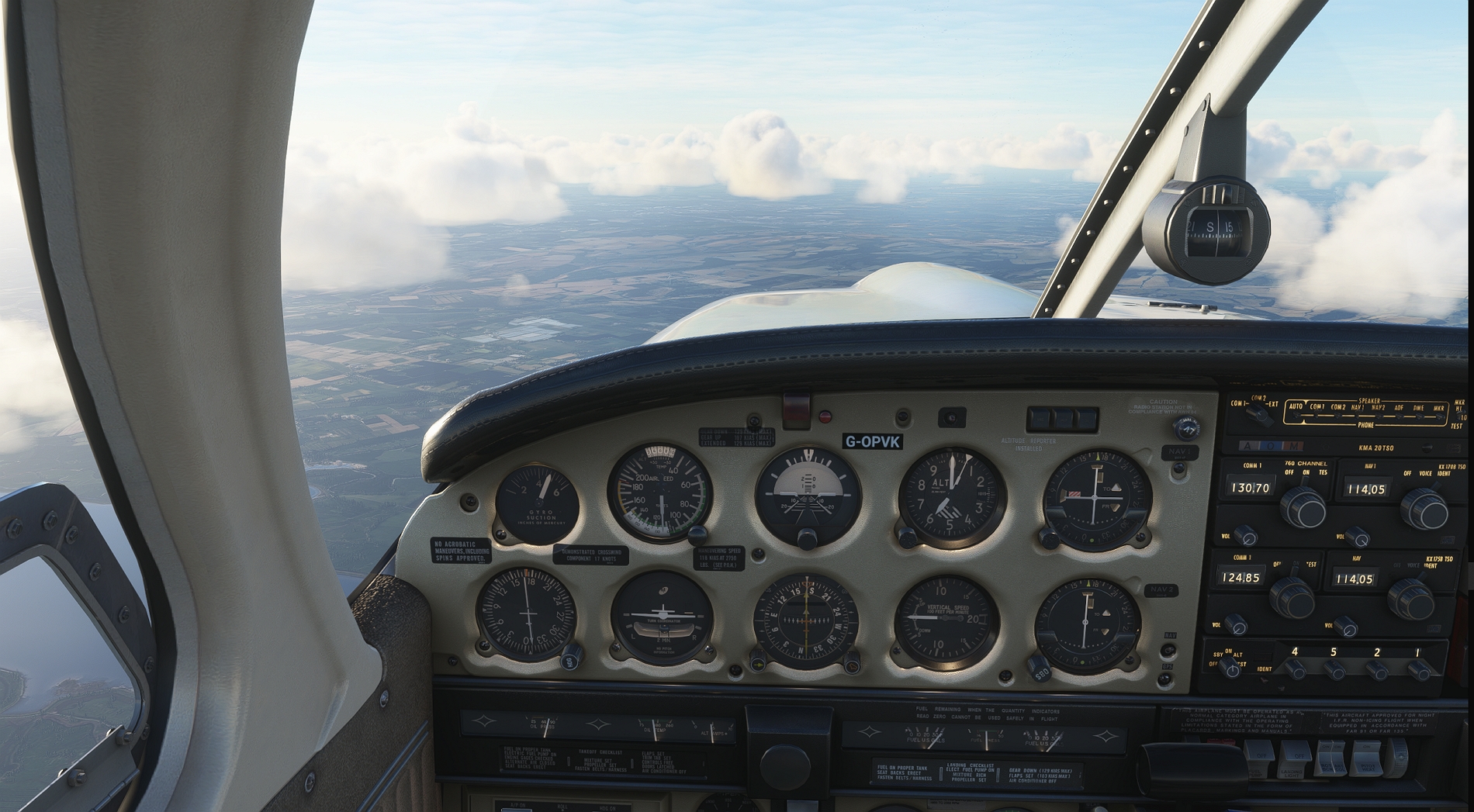 Crossing the Thames estuary, with the Isle of Sheppey just behind: 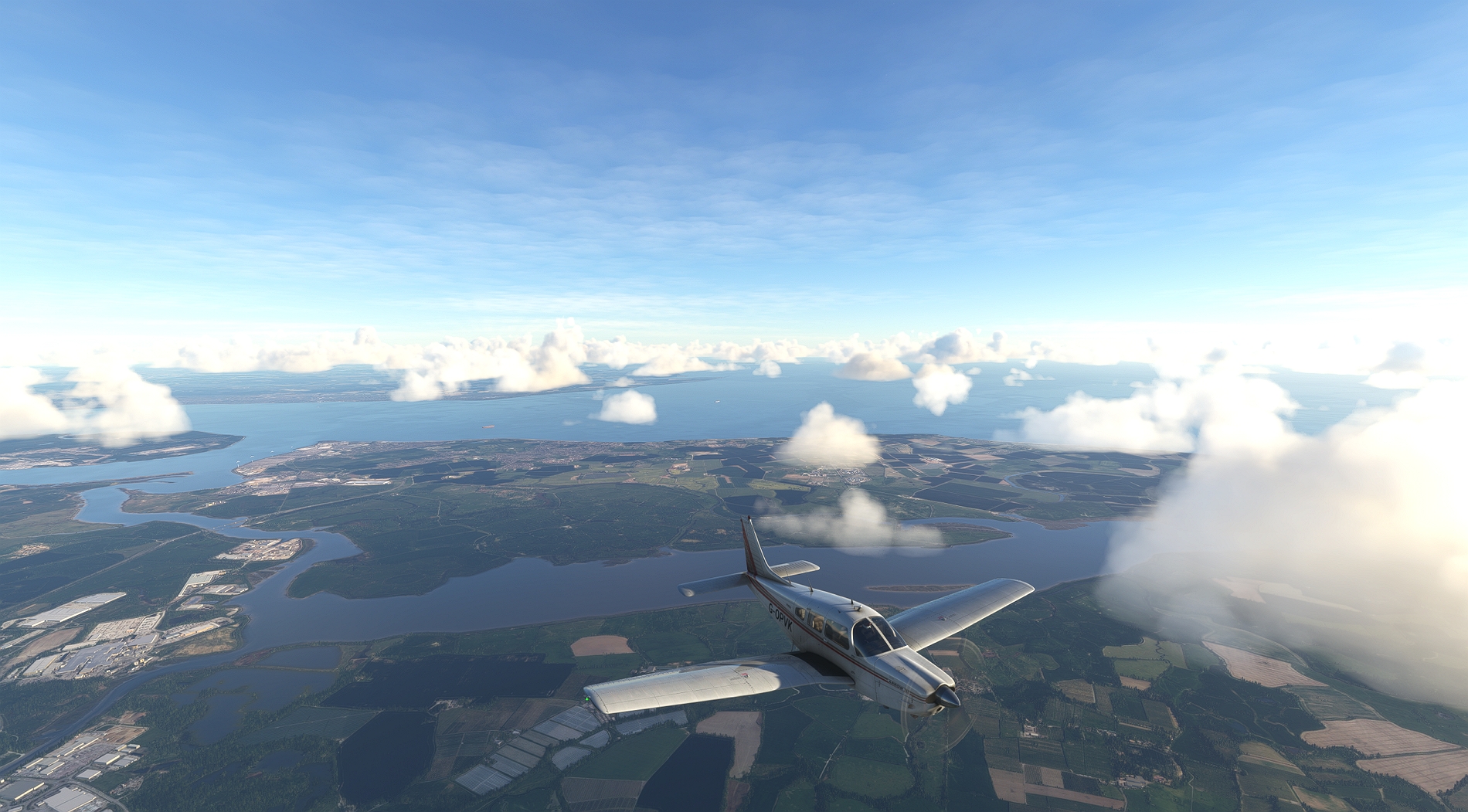 Crossing the coast near Dungeness, with Lydd airport below the tail, and the nuclear power station on the beach forward of the nose. I really must visit Dungeness for real - it's one of the strangest places in the UK: 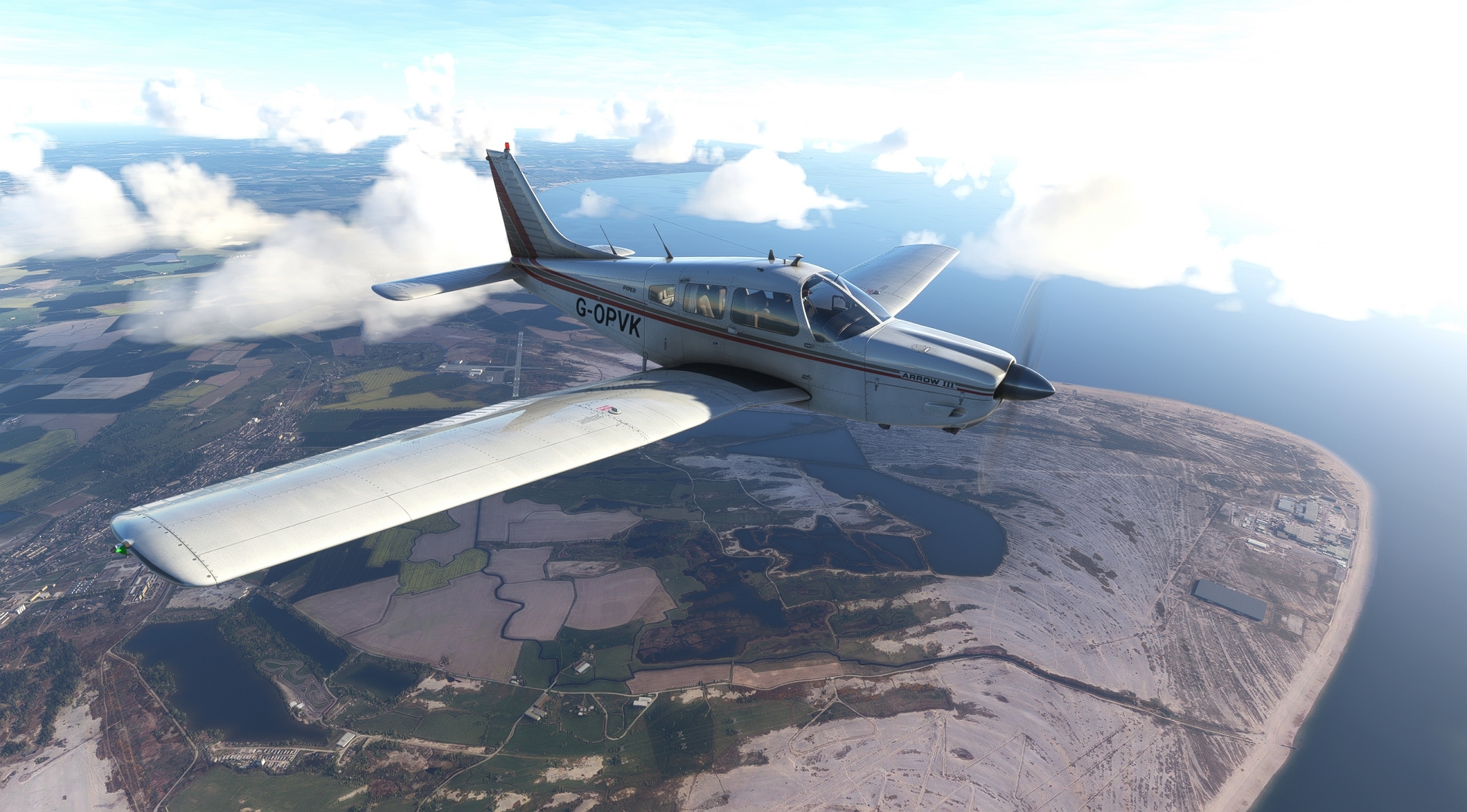 Crossing the French coast. That's Dieppe down there, and beyond the breakwater, you can see the broad pebble beach where the Canadians landed during the famous raid: 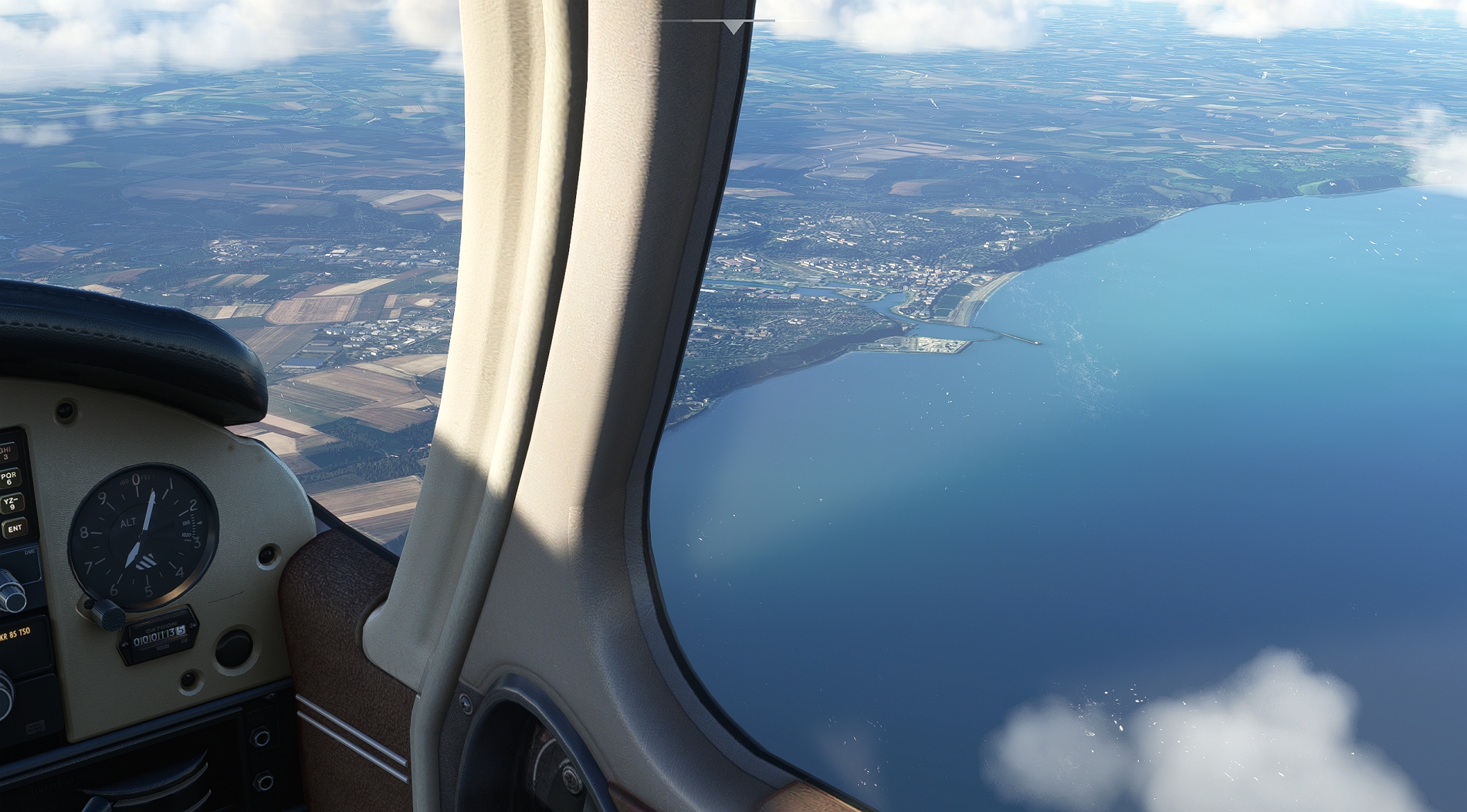 Still flying south, and crossing the river Seine. Off in the distance is Paris, but it was too hazy to cop an eye full of the tower. 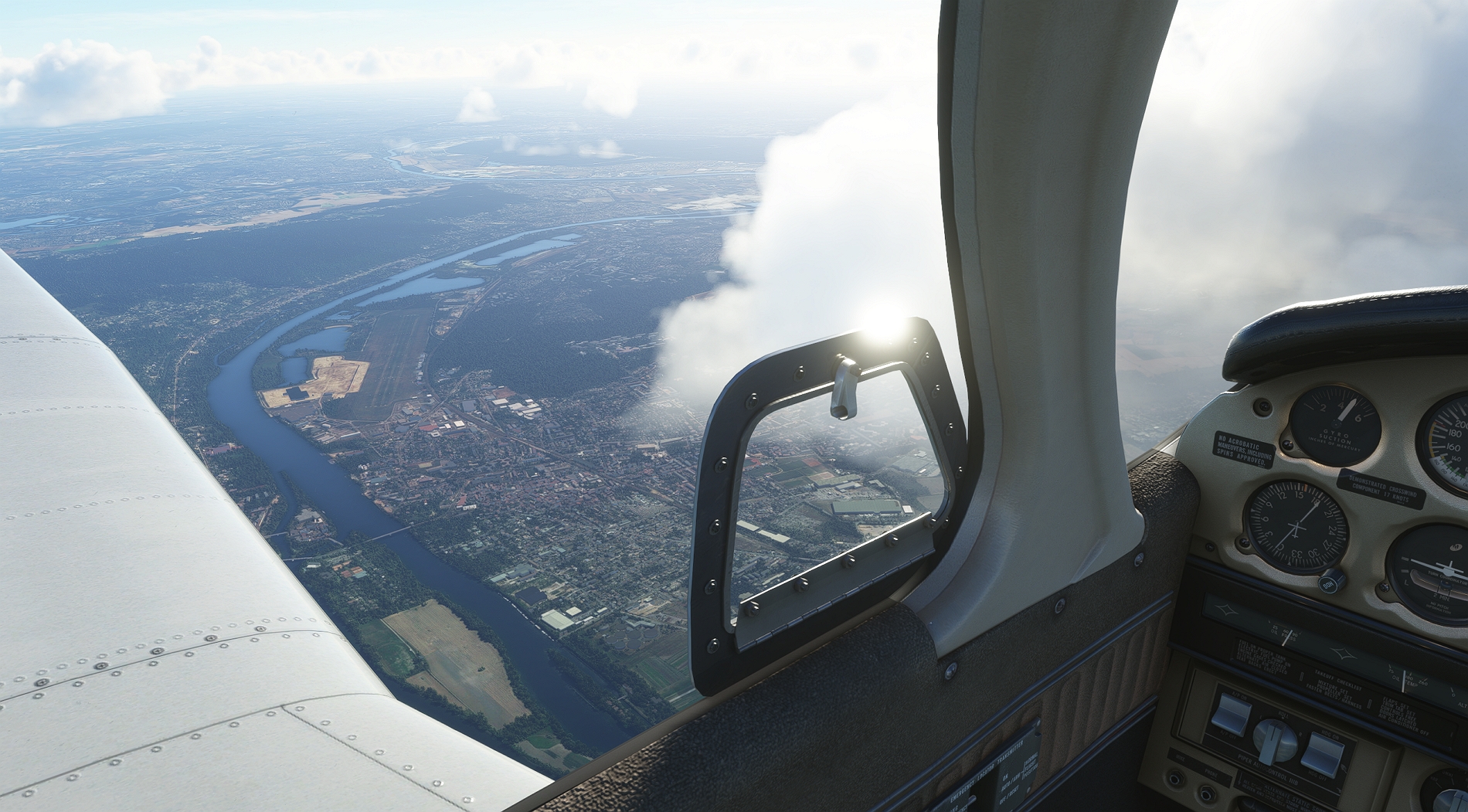 Having flown over mainly flat-ish terrain of southern England and north-east France, it starts to get more interesting as I travel further south - the Massif Central: 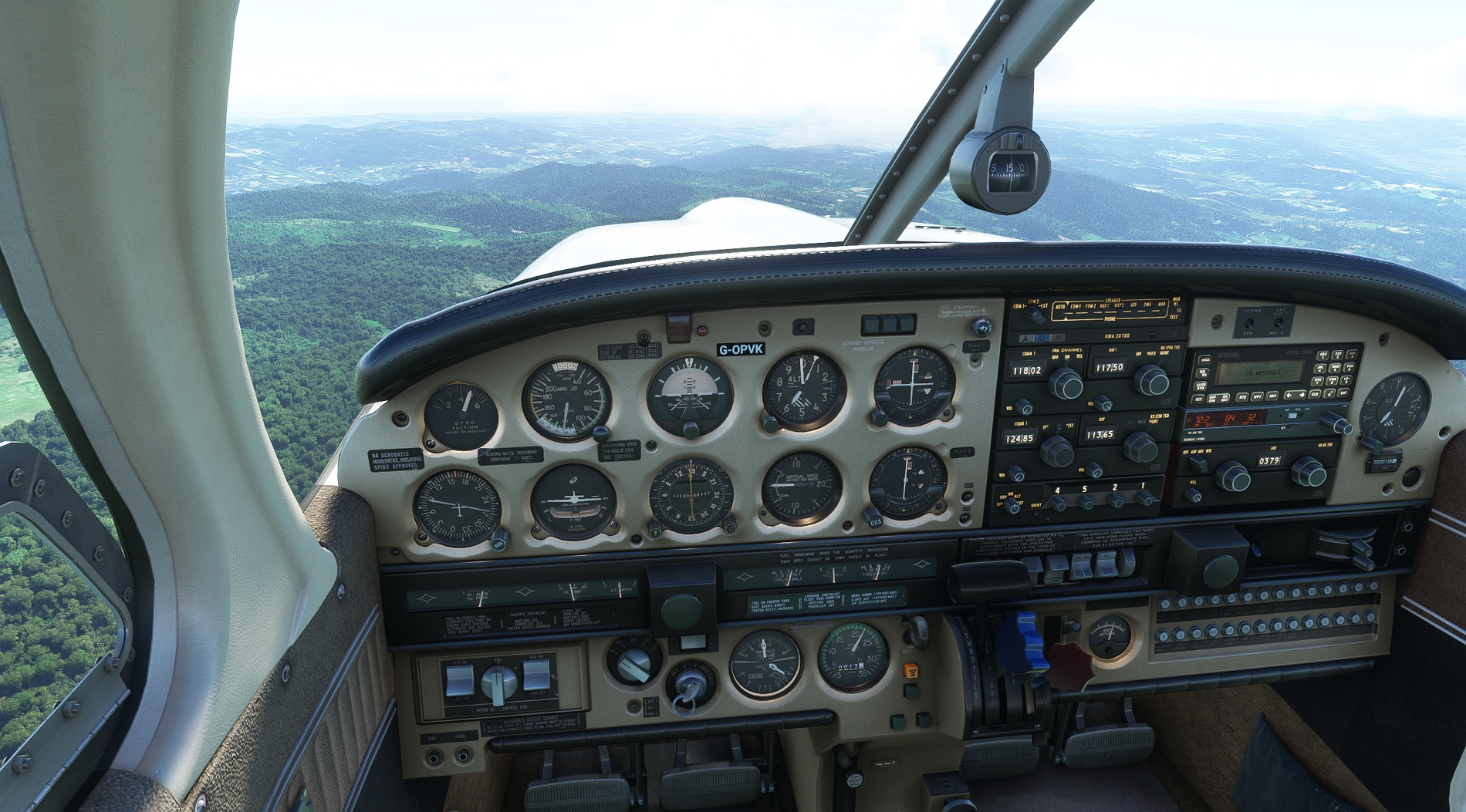 I remember there were a lot of forest fires in the Massif Central some years ago, and people started hearing the occasional explosion. It is thought they were caches of weapons and ammunition hidden away by the French resistance in WW2 and forgotten about. 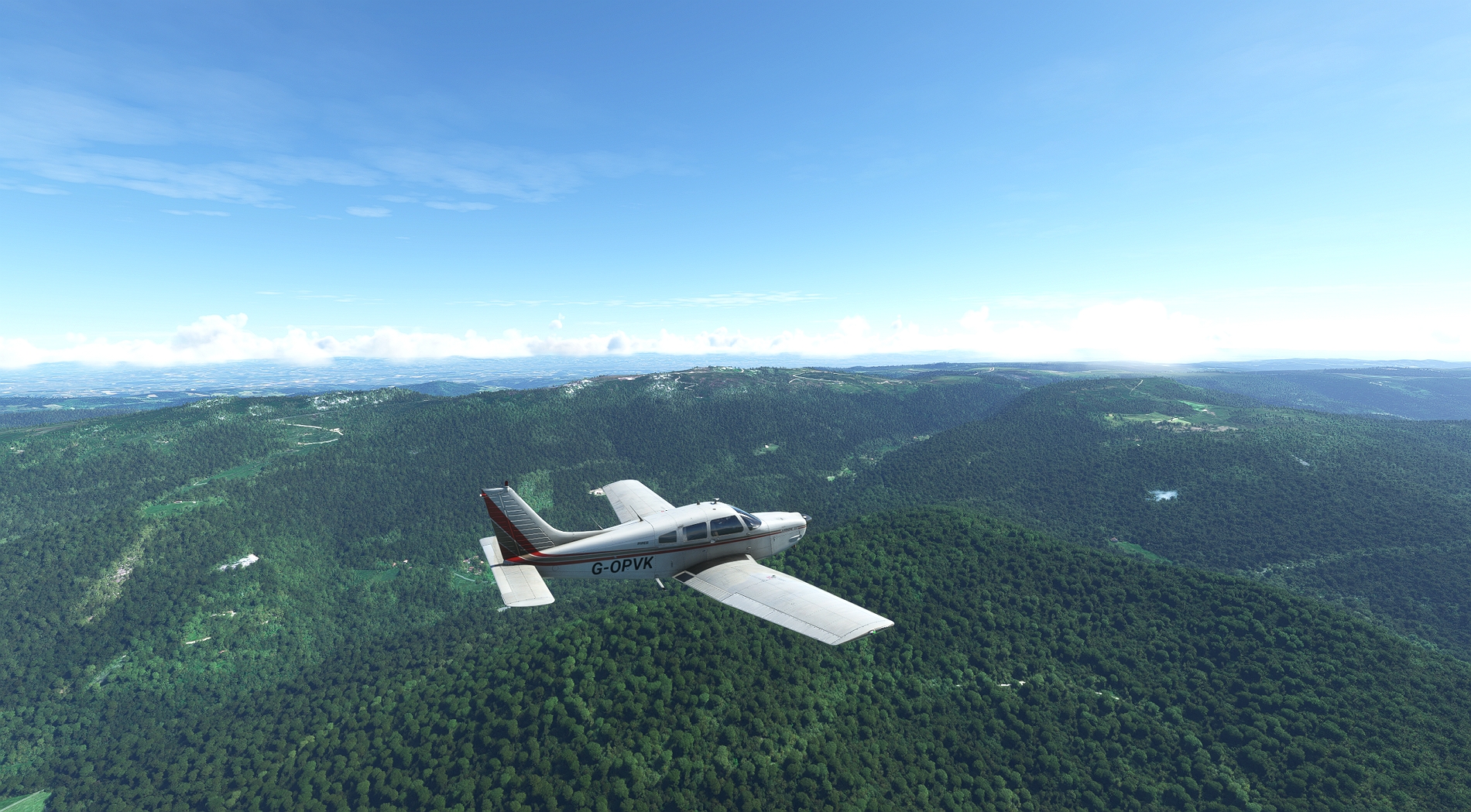 The river Rhone below, and time to turn south down the Rhone valley to Avignon and then Marseilles: 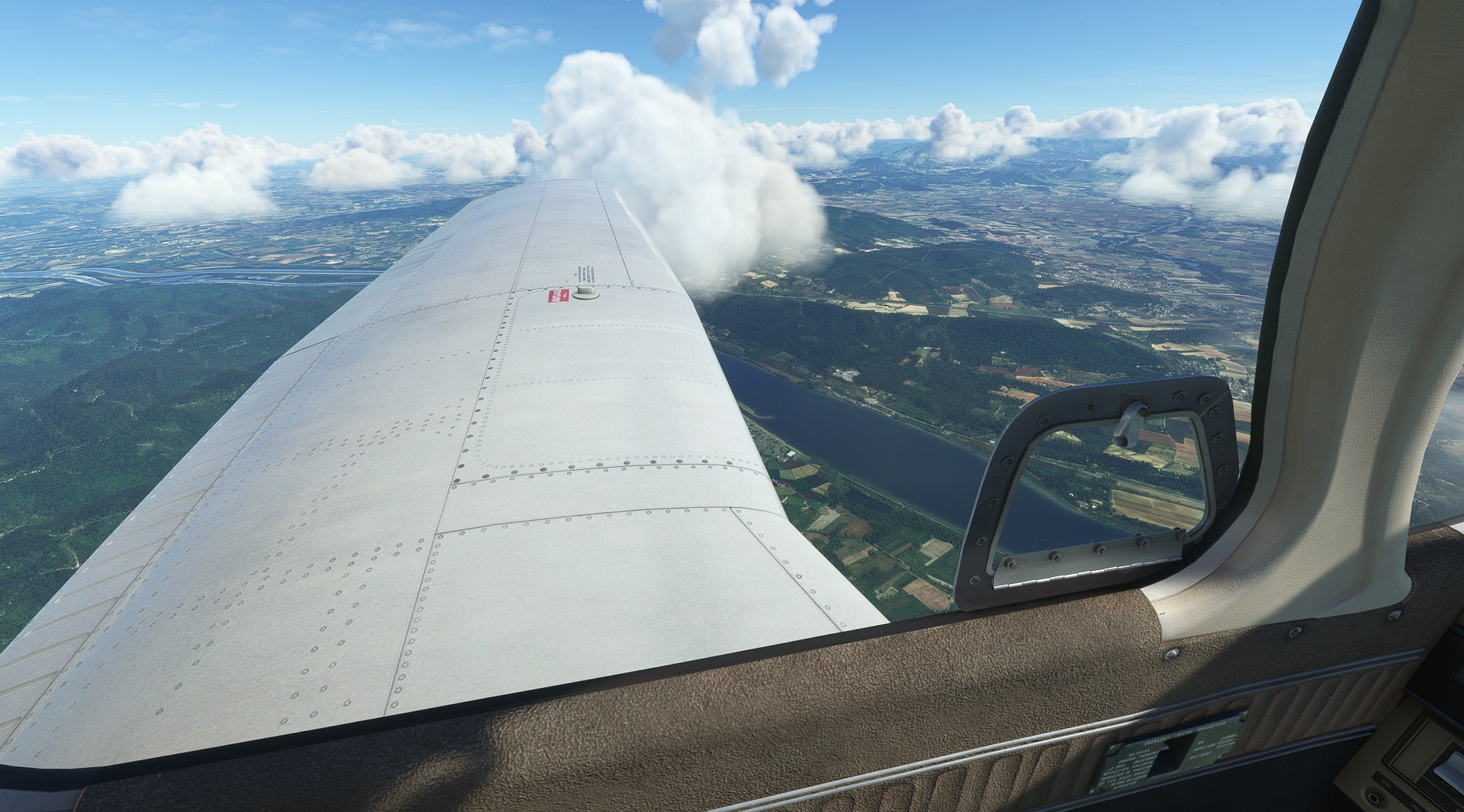 The bay of Marseilles, with the city in view: 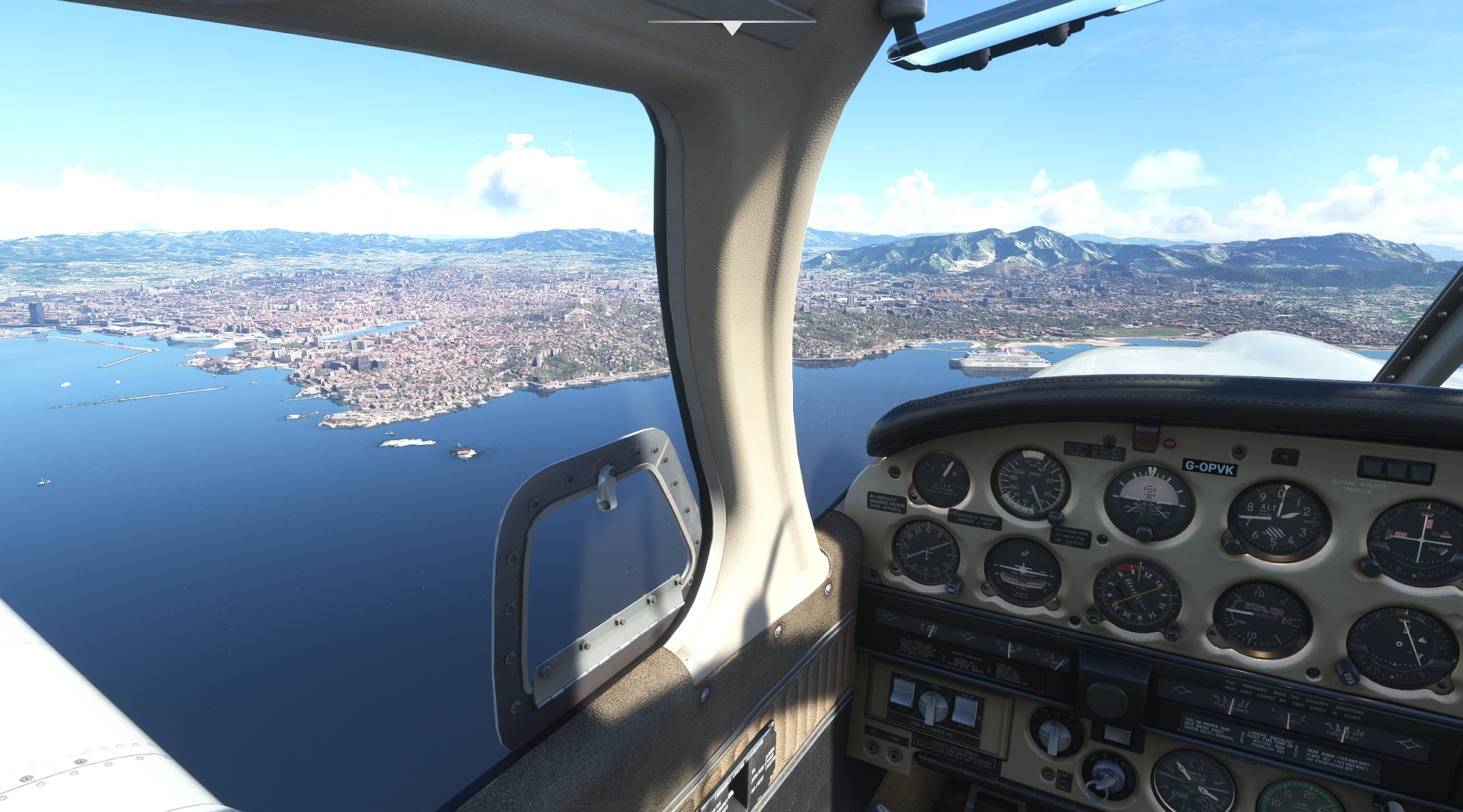 I skirt round the bay and head towards the airport, where I am cleared for runway 31L. Very nice view of the city and beyond, looking north: 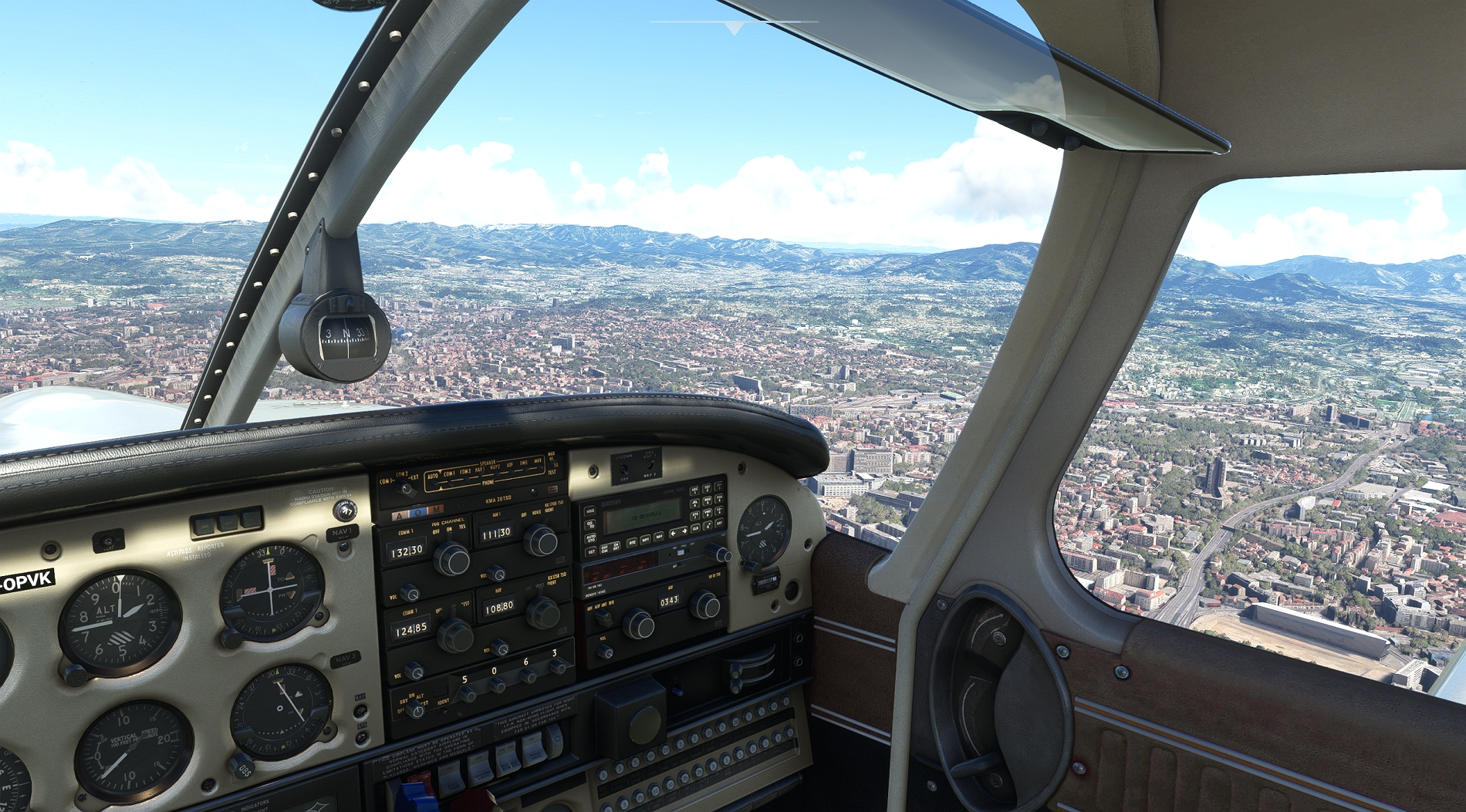 Runway 31L doesn't have an ILS, but 13R does, so I tried out the localizer back course hold during the approach. Pity I didn't have the glide slope too, as I ended up a bit high over the threshold.

Plenty of runway left, though, so still a gentle touch down in the end: 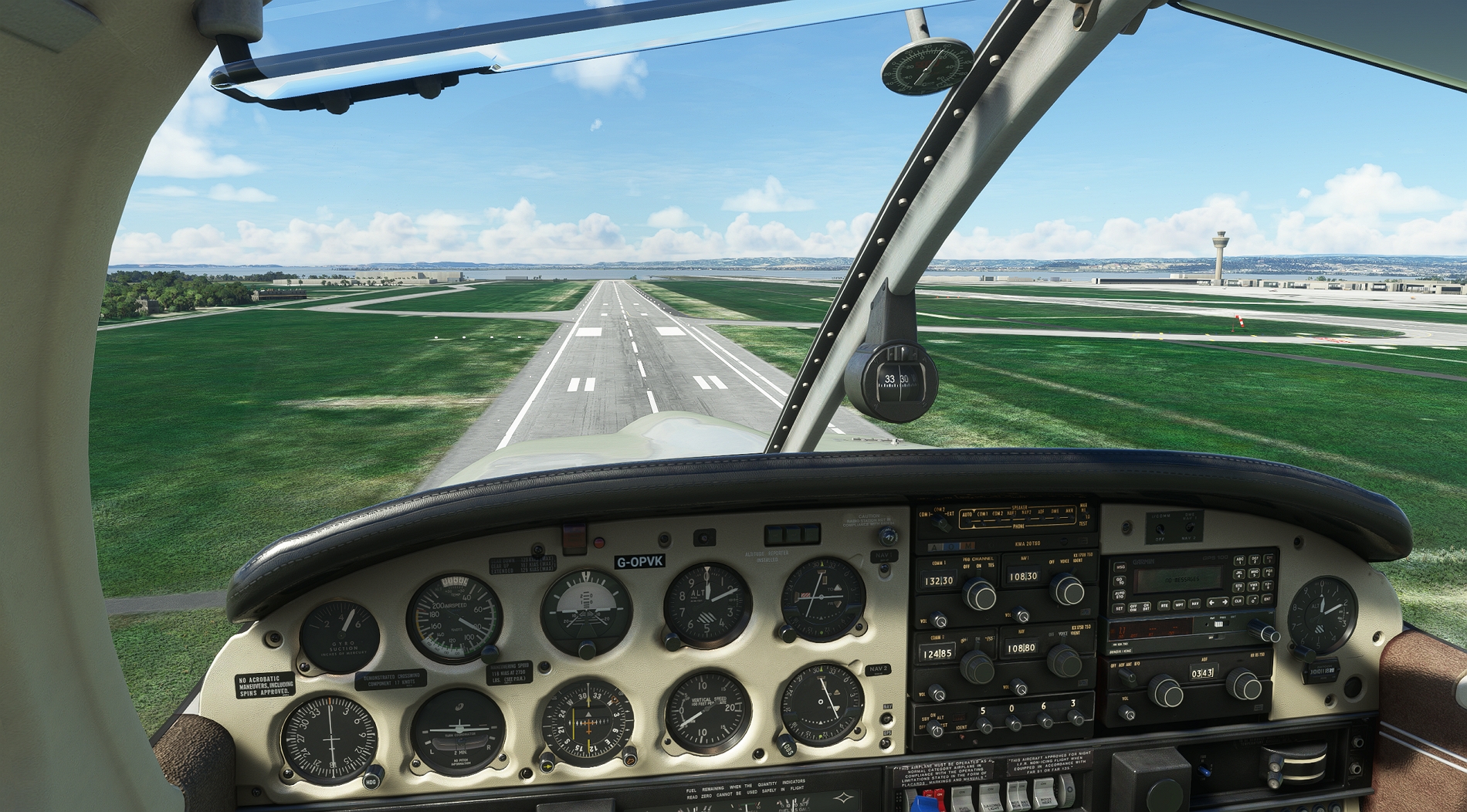 Taxying in to park, and very pleased to note that I have roughly 40% fuel left. No problem when the Australian legs come up, then! 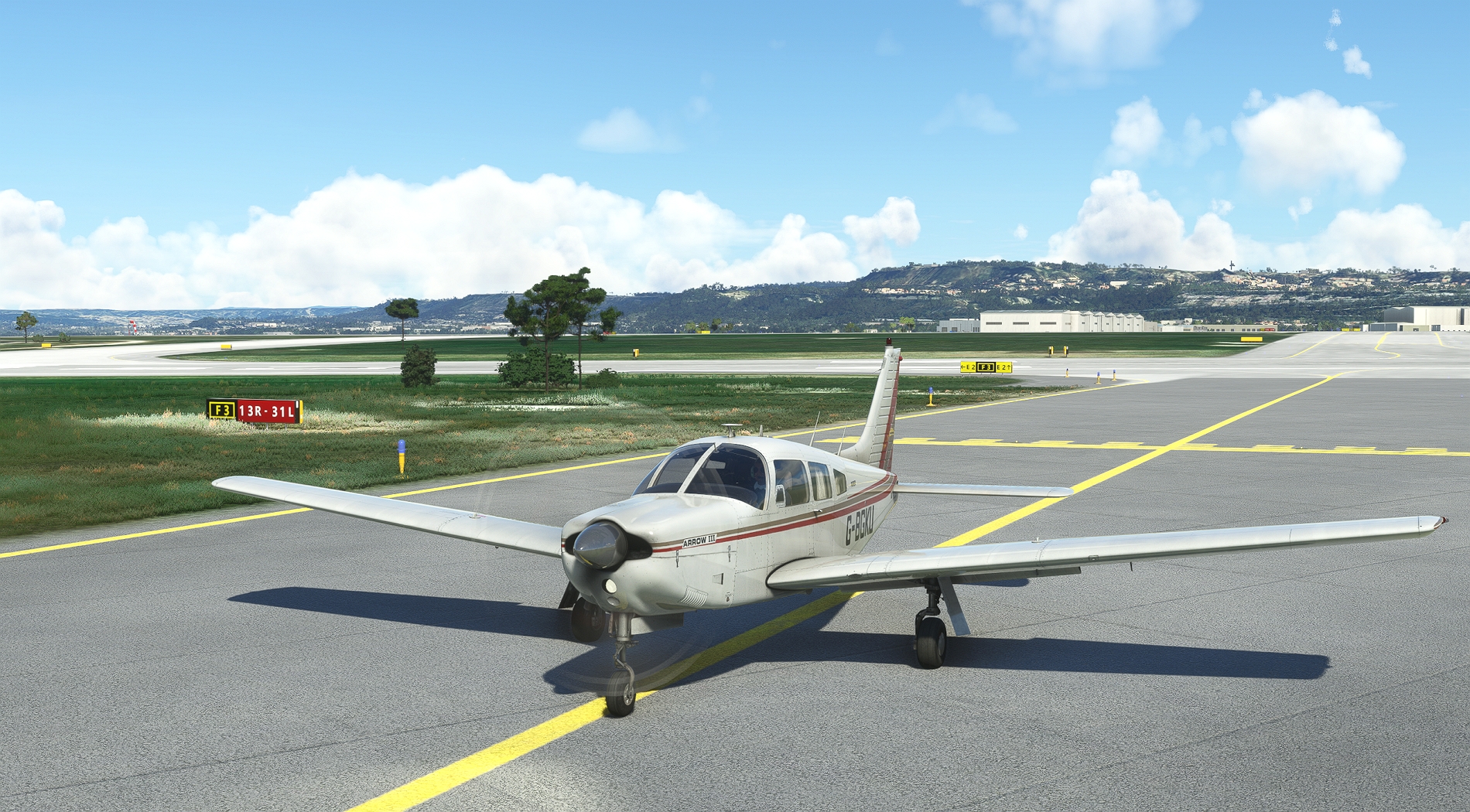 A really enjoyable flight, using only radio navigation throughout. It took almost 6 hours, but this fabulous simulator gives you the world to watch going by. The next leg is Marseilles to Rome, and already planned out. I love MSFS !

Thanks for that, Paul.
My skills would not get me that far, and you've still got a long way to go!
I don't think that I could sit at the screen for six hours, even though I do love to eyeball the scenery when I can.

Nice shots Paul, and quite an epic journey to undertake....or overfly

Re Dungeness, it has a stark beauty all of it's own, a part of the country that I've been visiting since the early 60's, and never fail to enjoy. Sadly MSFS does not do it justice close up...or Lydd for that matter, it could do with a bit of "enhancement"!

Gina
It's so nice to be insane, nobody asks you to explain.
Top

At least in reality that is what to do, not sure how MSFS would handle it.

I haven't ventured much further afield than the UK snd France in the Sim yet. Looking forward to the next update.

though doubt if I now have the time nor energy to undertake such a marathon flight.

Thanks chaps. Honestly, since getting MSFS, I've done more flight simming than in the previous two years, I reckon. Completely re-addicted.

At least in reality that is what to do, not sure how MSFS would handle it.

Hi Adrian - yep, you're right. I read Lycoming's manual before setting off, and it says that the engine should be operated AT maximum EGT, so I kept to that in order to gain a rough 'yard stick' of what the Arrow is capable of. According to the JF manual, the maximum range is 697 Nm (therefore 802 statute miles), and according to the route map above, the longest leg is Athens to Aleppo at 751 miles - not much of a margin for error. I will run lean of peak on that leg, as you advise, and put up with any loss of power. I can drop in to Cyprus if I do run short, though the desire is to replicate the flight of G-ACSR exactly. Calcutta to Rangoon is going to be fun - 639 miles, almost all of it over water, and no nav aids other than those at each end!

Thanks for bringing us along for the ride, Paul.

Looks like it's going to be a great adventure Paul. Keep us informed with your progress.
Dave G.
Top

As before, click on the pictures to see them full size.

I shall add to this map as each leg is flown. I couldn't use real weather as the winds today were too much against me, so just high level clouds and a westerly breeze of about 10 knots. 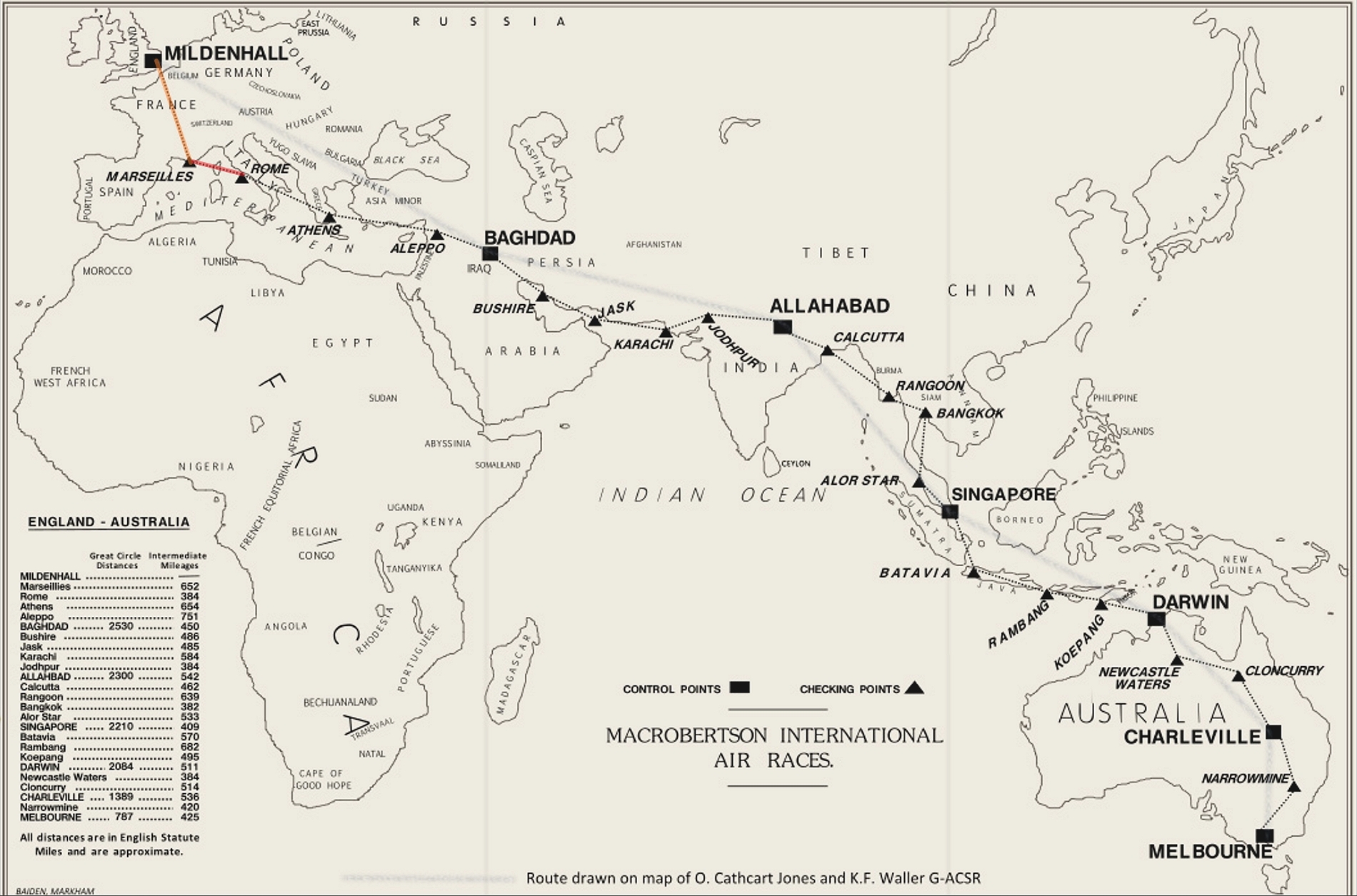 Early morning taxi at Marseilles. I needn't have set off this early really, as it's one of the shortest legs, and had I set out later, I wouldn't have had the sun in my eyes all the way. Ah well, you live and learn: 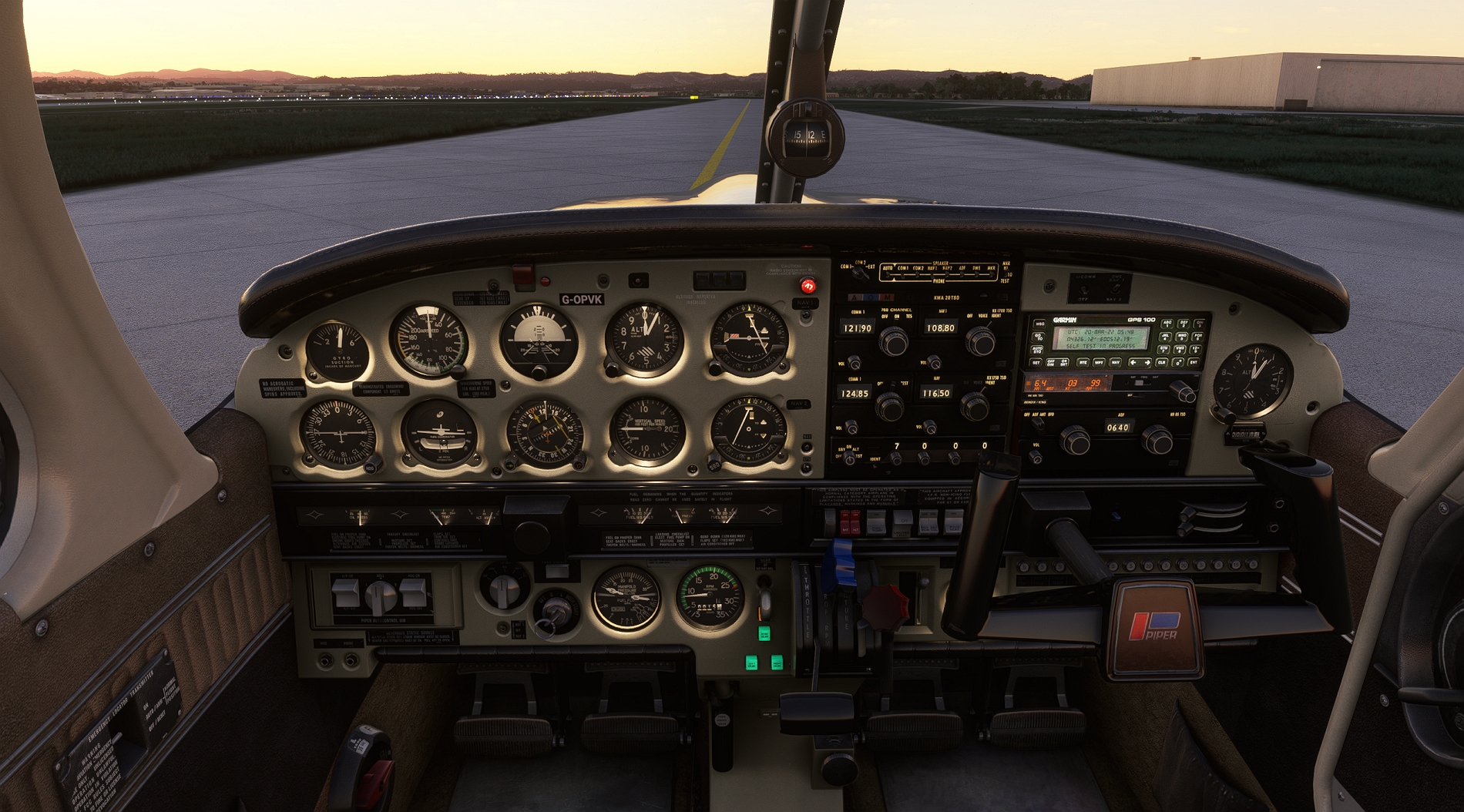 "Did you do a thorough walk round before taking off ?"
"Certainly! "
"Sure about that ?"
"Of course I did, man. I'm a professional, I never cut corners!"
"Then why did you not notice someone's altered your aircraft registration overnight ? " 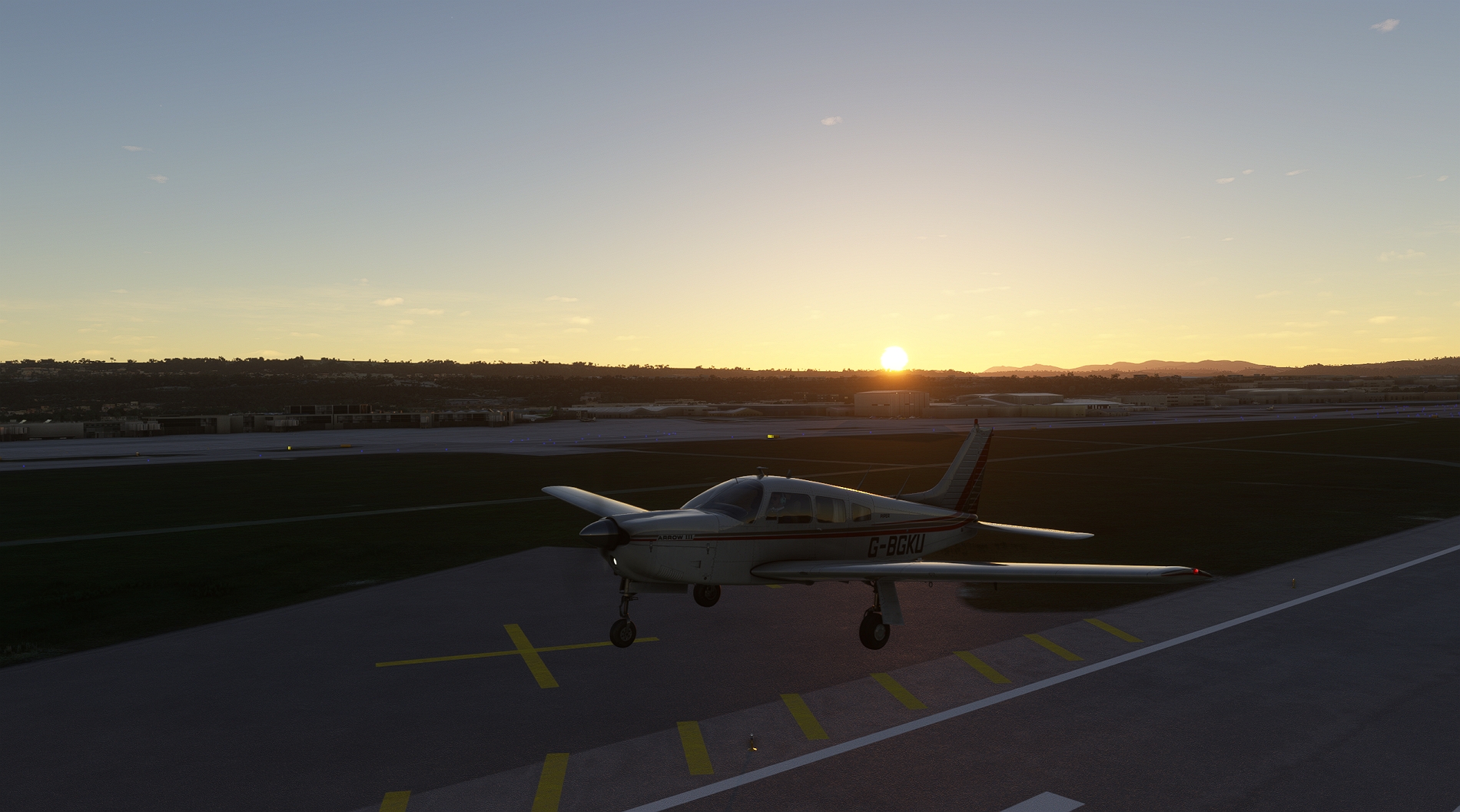 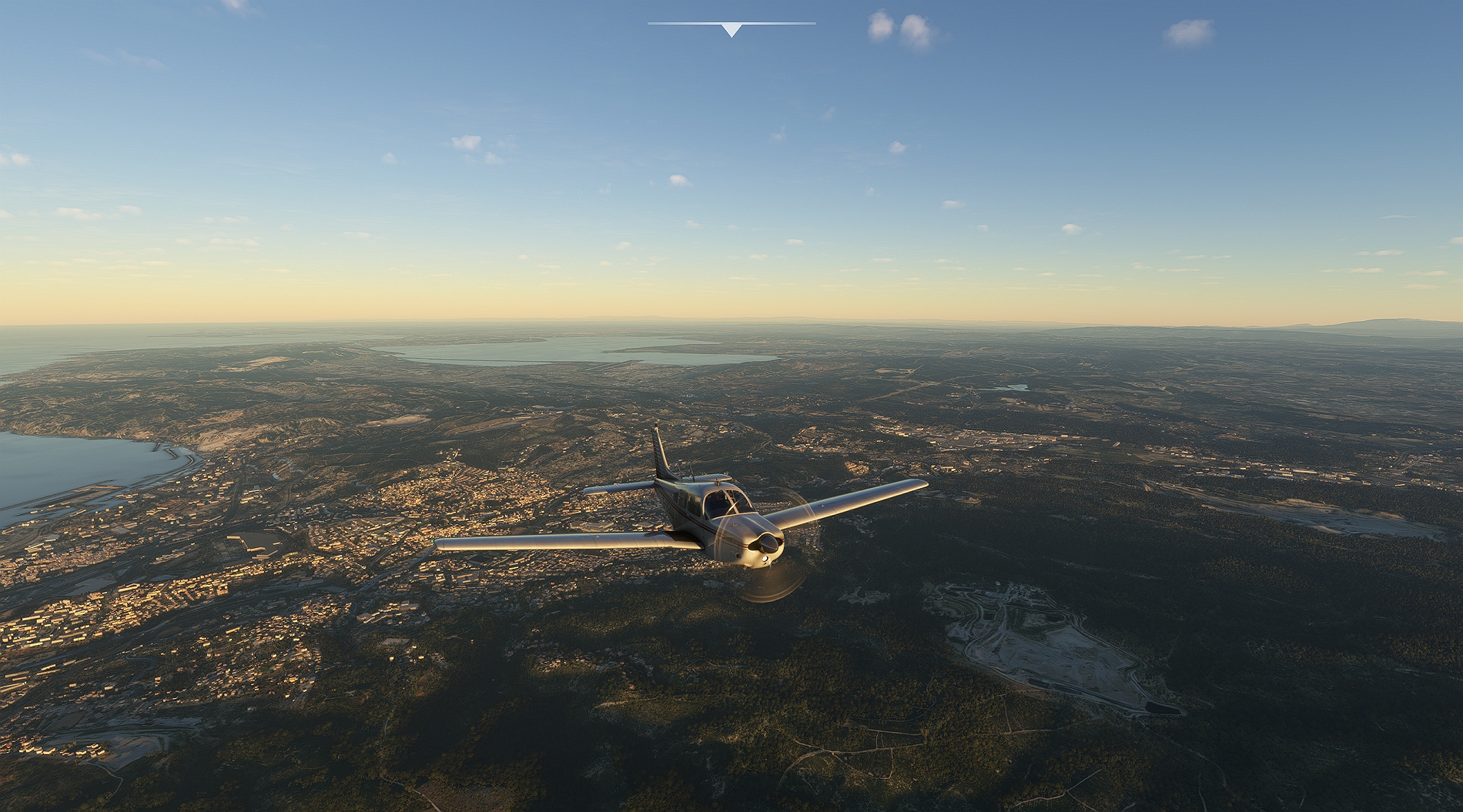 On my way over the northern Balearic Sea into the sun's glare. Notice how effective the drop-down sun visor is - I am able to see distant Corsica much clearer through it. Were sun visors as effective in FSX or P3D ? Someone remind me... 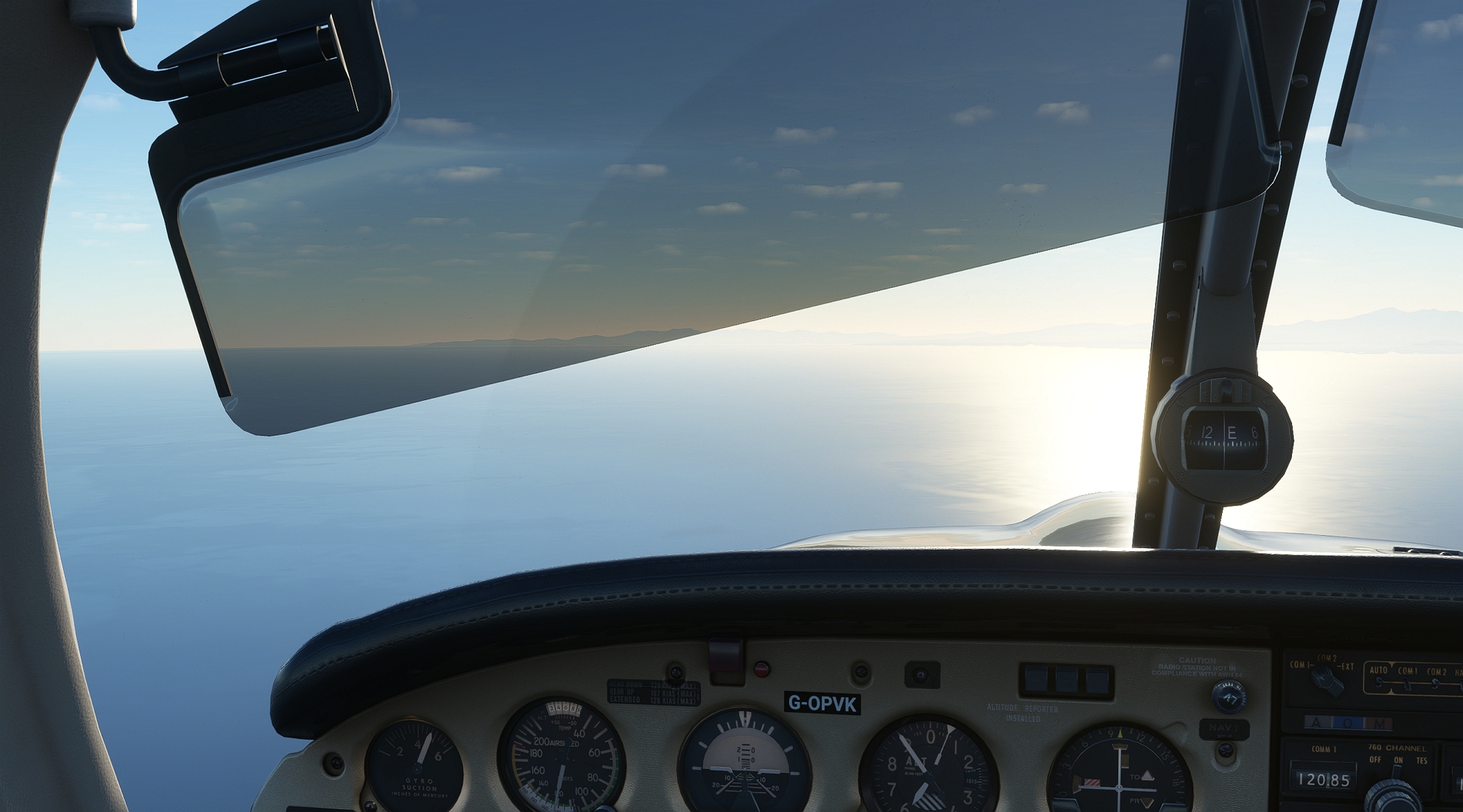 Crossing the north Corsican coastline. That's the beautiful horseshoe-shaped bay of Calvi just aft of the wing. Lake Codole can be seen in the left of the picture: 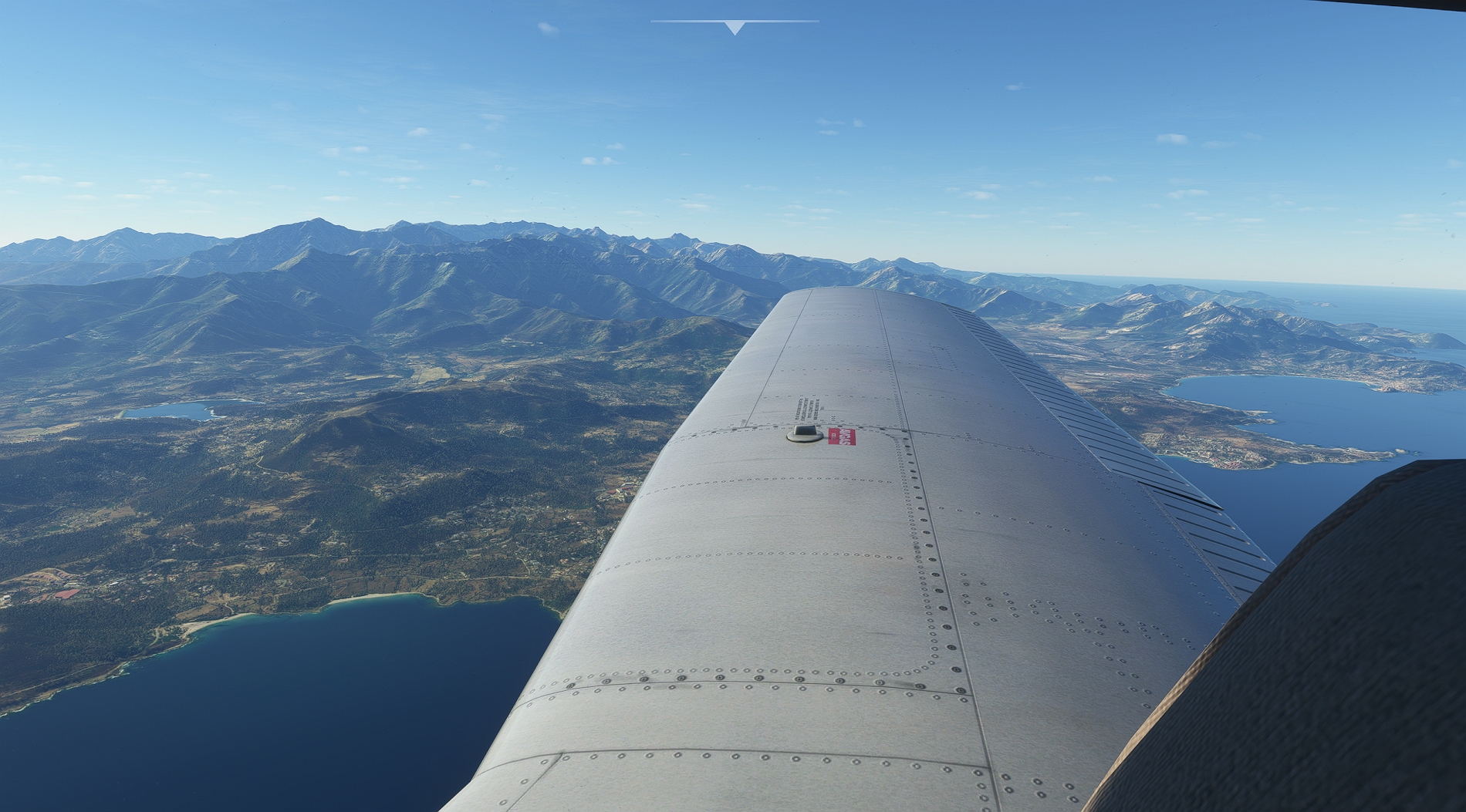 Crossing the east coast of Corsica, with Bastia Poretta airport (LKFB) below: 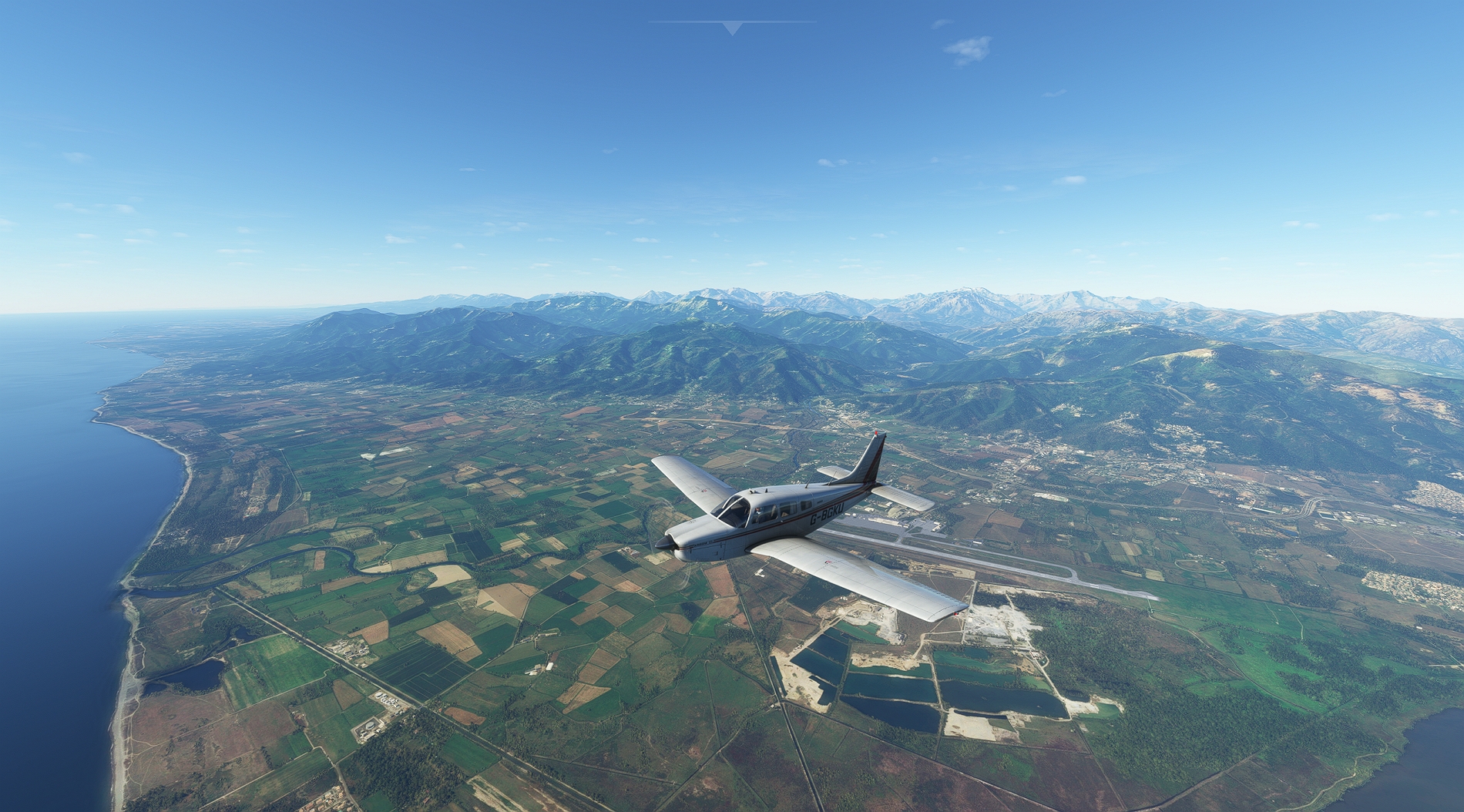 Crossing the Tyrrhenian Sea to Italy. That's the Isle de Montecristo down there, as in "The Count of..." by Alexandre Dumas. 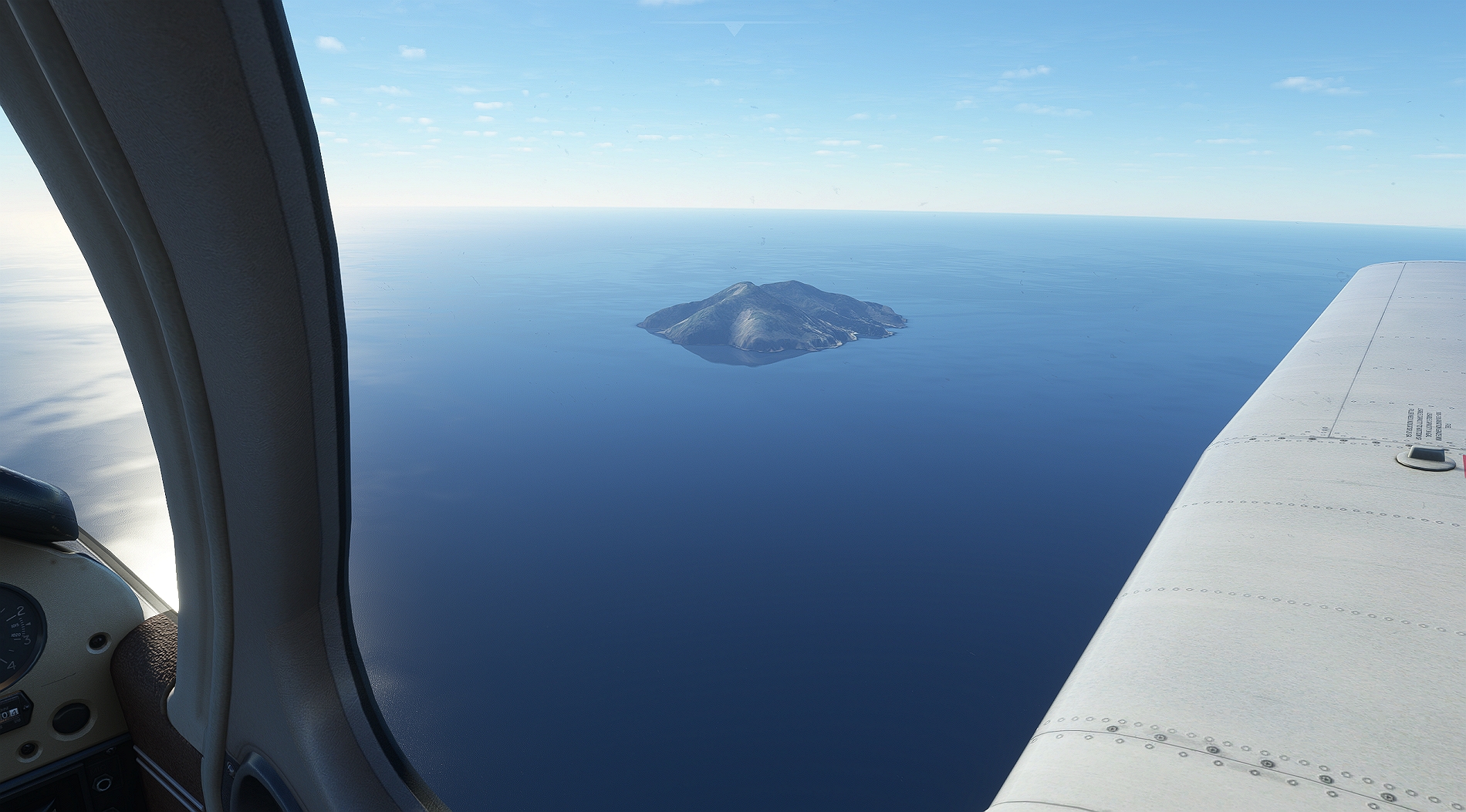 Crossing the west coast of Italy, near the Tarquinia VOR (TAQ), and just north of the river Mignone, which can be seen glittering in the sunlight: 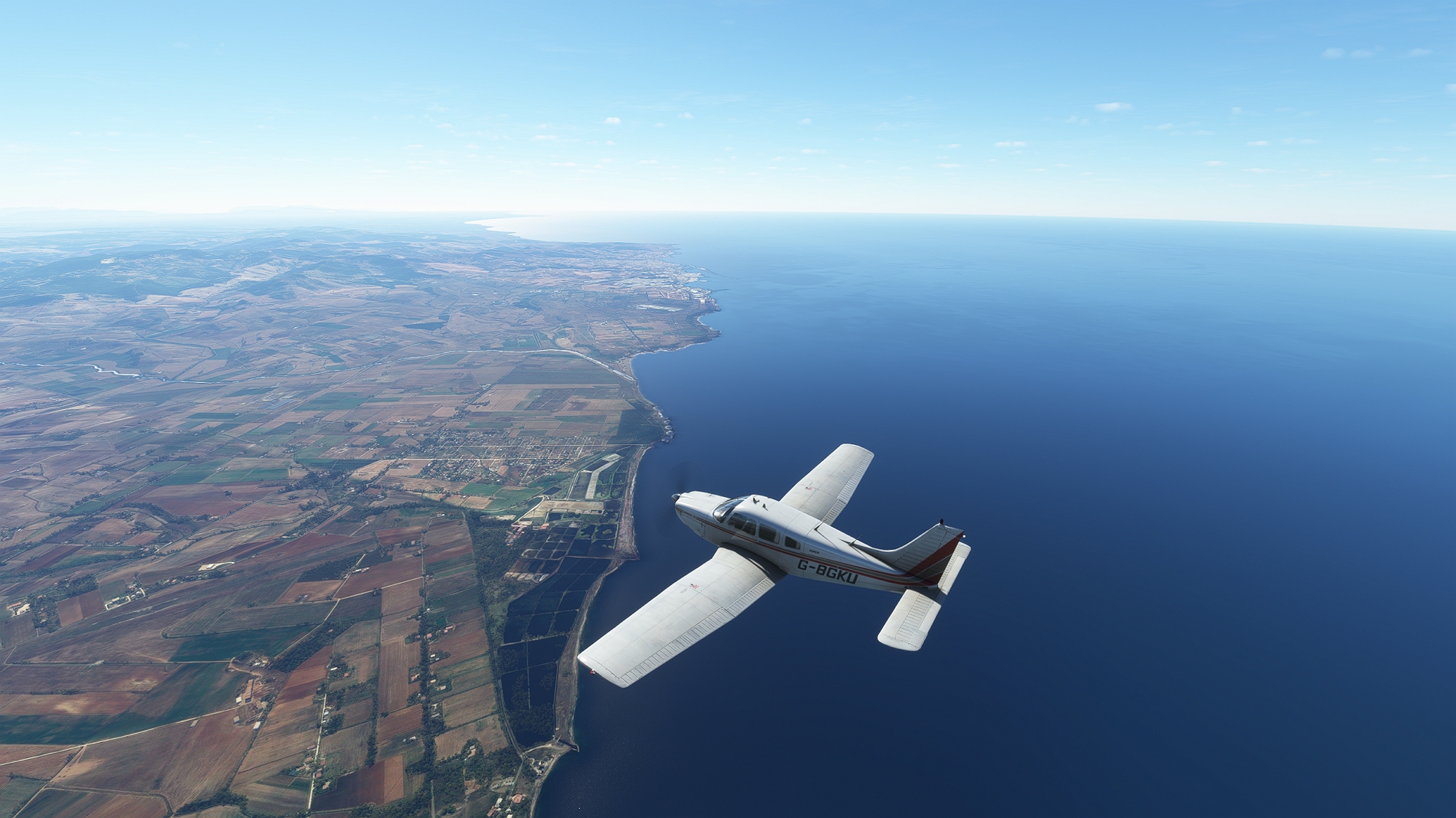 Descending over Rome towards Ciampino (LIRA), where I am cleared for runway 33. Forward of stbd. wing tip, you can see Saint Peter's Square and Basilica at the heart of the Vatican. The circular building just above the engine cowling, by the river, is the Castel Sant'Angelo, which was originally designed as a mausoleum for the Emperor Hadrian (he of the eponymous Wall). 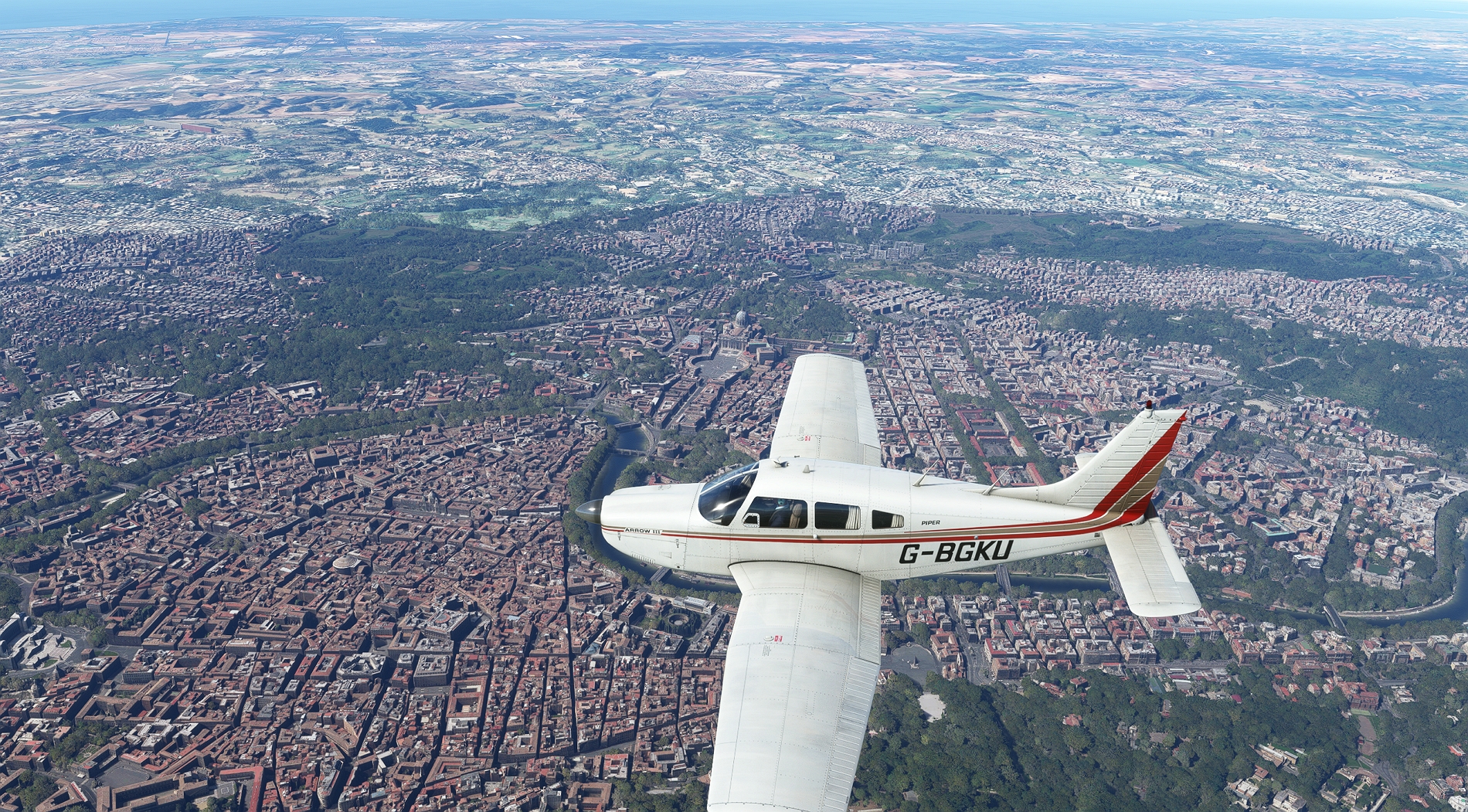 The large white building at the extreme right is the Italian Supreme Court. Below it, on the opposite bank, is the circular Mausoleum of Augustus. Just behind the right wing tip is the circular Pantheon. Forward of the right wing is the huge white monument of Victor Emmanuel, also known as the Altare della Patria (Altar to the Fatherland). Forward of the nose is the unmistakable Colosseum (or Coliseum). 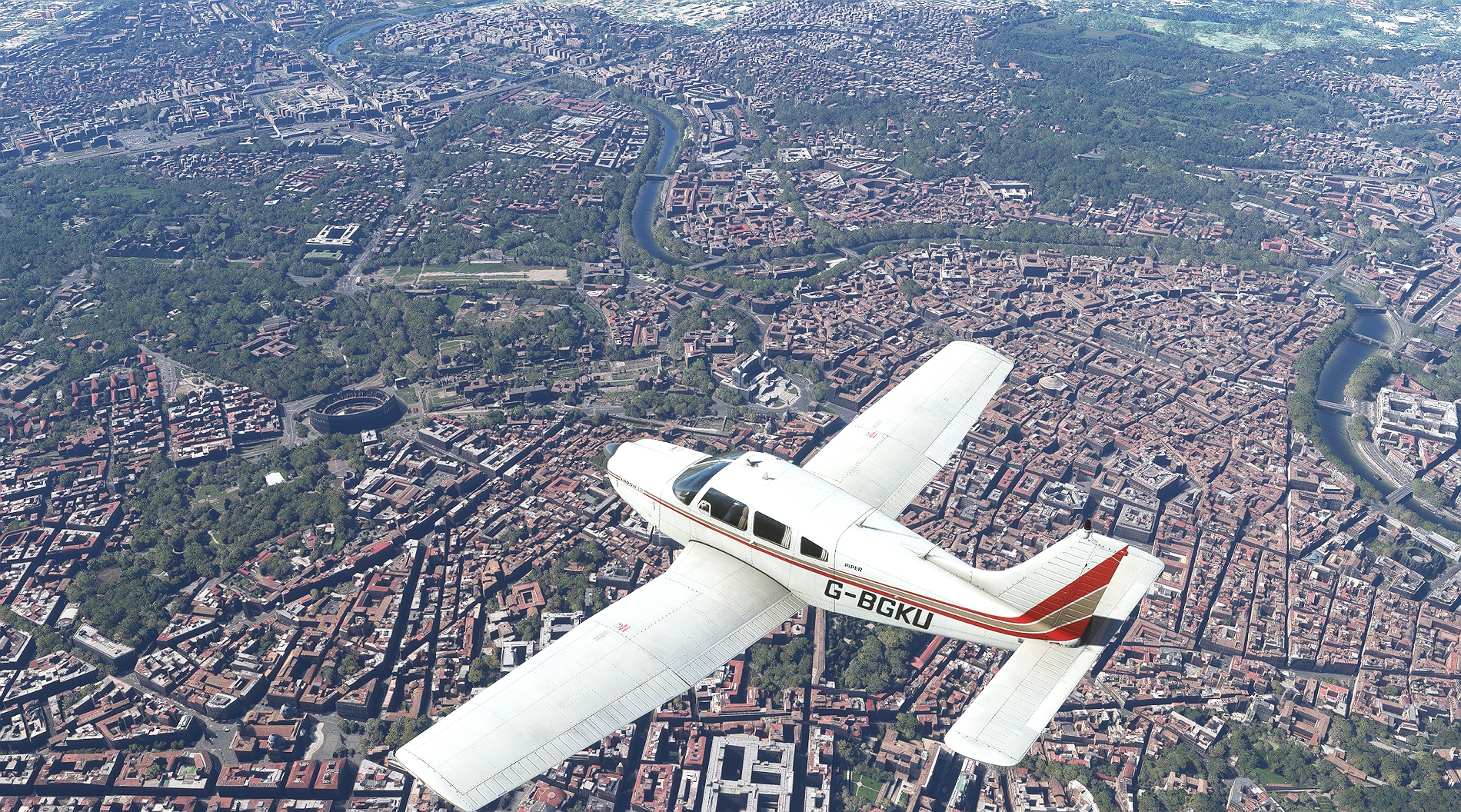 Landing at Ciampino, south of Rome. 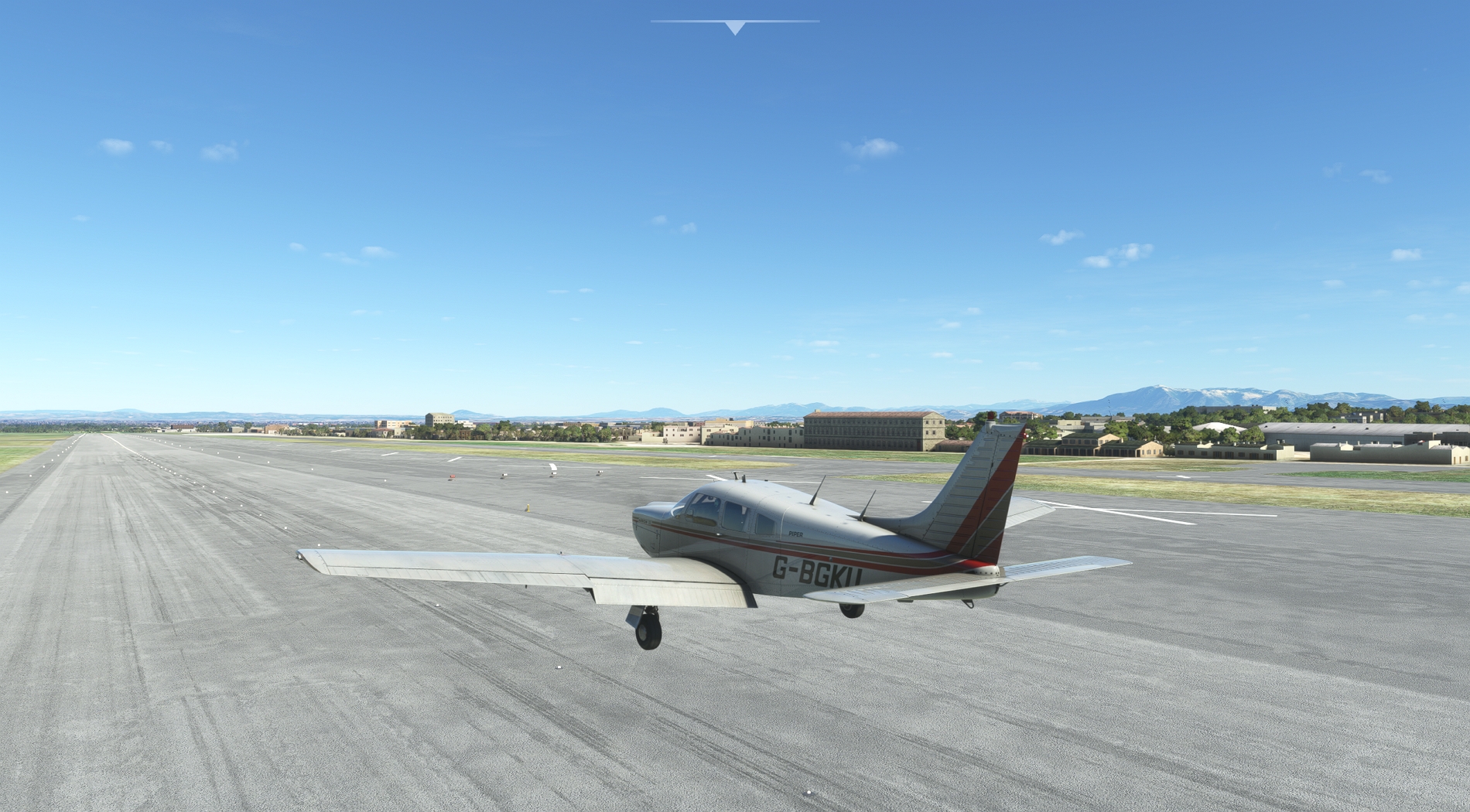 Another great sight-seeing trip in MSFS!